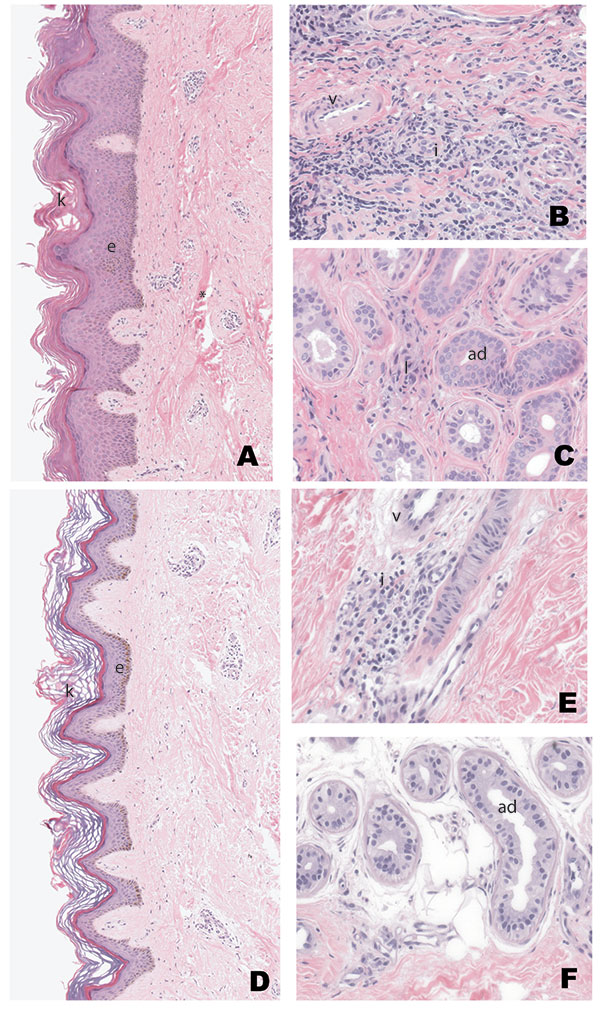 Figure1. Representative sample of skin punch biopsy specimens from patients with lymphedema before (A, B, C) and after (D, E, F) 1 year of basic lymphedema management. Pretreatment abnormalities of the epidermis (e), which include increased number of epithelial cells (acanthosis and epidermal hyperplasia) and thickening of the keratin (k) layer, were improved after treatment (compare first [A] and second [D] biopsies from same patient). Also noted is thickening of collagen bundles (*) in the dermis on the first (A) sample, which is not observed on the second (D). The intensity of inflammatory cells (i), which stain blue, surrounding fibrosed vessels (v) on the first sample (B), are more prominent than in the second sample (E). The amount of inflammation (i) in the subcutaneous adipose tissue is also more pronounced in the first biopsy sample (C) than the second sample (F) where adnexa (ad) with minimal inflammation can be observed. (Hematoxylin and eosin stains; original magnification for A, C, D, and F = 25x; B and E = 50x.)

Page created: April 22, 2011
Page updated: April 22, 2011
Page reviewed: April 22, 2011
The conclusions, findings, and opinions expressed by authors contributing to this journal do not necessarily reflect the official position of the U.S. Department of Health and Human Services, the Public Health Service, the Centers for Disease Control and Prevention, or the authors' affiliated institutions. Use of trade names is for identification only and does not imply endorsement by any of the groups named above.