Parastrongylus (= Angiostrongylus) cantonensis is a parasitic nematode of Norway rats throughout tropical regions. This parasite is neurotropic and causes disease and death in humans and other mammals. We report the first identification of P. cantonensis, as the cause of a debilitating neurologic disease in a captive primate in Florida.

On July 28, 2003, an acute and disabling neurologic disorder developed in a captive 49-year-old male white-handed gibbon (Hylobates lar) from the Miami Metrozoo in Florida. The gibbon was born in the wild but had been in captivity in Florida since 1963. The onset of severe quadriparesis occurred overnight, without signs of prior illness. In addition to extreme weakness of all limbs and the inability to support his body, the gibbon had a slight lip droop but was able to swallow and had no other detectable cranial nerve signs. The gibbon was behaviorally depressed but responsive and aware of his surroundings. Blood analyses and thoracic radiographs did not show a cause for the clinical disease, and blood eosinophil count was not elevated. The animal did not show improvement after 48 hours and was euthanized by intravenous injection of Euthasol (Delmarva Laboratories Inc., Midlothian, VA). On postmortem examination, chronic renal disease and moderate cardiac fibrosis and endocardiosis were observed, but these conditions were considered to be age-related. Gross abnormalities were absent on external surfaces of the central nervous system (CNS). Tissues of the CNS were preserved in 10% formalin. 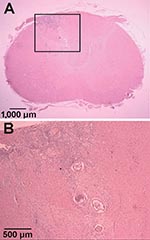 Figure 1. Hematoxylin and eosin–stained sections of Parastrongylus cantonensis in the parenchyma of the cervical spinal cord of a gibbon (Hylobates lar) from Florida (A). Enlarged image of inset from panel A (B).

Tissue samples from regions of the CNS were embedded in paraffin by using standard procedures. Tissue sections were cut (6 μm) and stained with hematoxylin and eosin. In the transverse sections, the only gross lesion observed was a thin, white discolored area in the left dorsal funiculus in the cranial cervical spinal cord segments. Microscopic examination showed necrosis and inflammation located primarily in the dorsal gray columns throughout the cervical spinal cord. This lesion was bilateral with some involvement of the adjacent funiculi. The areas of inflammation included numerous eosinophils and transverse sections of one or more parasitic nematodes (Figure 1). A few lesions were found in the ventral gray columns. This destructive lesion extended into the caudal medulla. Rostral to this were a few scattered destructive lesions, and a few sections of the parasite were present in the leptomeninges. Wallerian degeneration occurred in the dorsal funiculus where the white discoloration was observed on gross examination.

Figure 2. Morphologic features of a male nematode recovered from the central nervous system of a gibbon (Hylobates lar). The characteristics used for specific identification of Parastrongylus cantonensis were the presence of a...

P. cantonensis are parasitic nematodes that reside in the cardiopulmonary system of their rat (Rattus spp.) definitive hosts. The parasite is common in Southeast Asia and the South Pacific and has been reported in Madagascar, Japan, Egypt, and India (5). Reports also document P. cantonensis from the Western Hemisphere in Cuba, Puerto Rico, Dominican Republic, Bahamas, Jamaica, and Haiti (6,7). From the mainland United States, P. cantonensis is known only in Louisiana (8) and Mississippi (9). Naturally acquired infections in these two areas resulted in neurologic disease in a horse (9), in wildlife species (10), and in both human (11) and nonhuman primates (10,12). Onset of neurologic signs in humans occur 1–45 days after infection (13,14). This feature suggests that the captive gibbon in this report likely acquired the infection shortly before onset of disease. The advanced age of the animal may have been a factor in the severity of the disease. Although deaths have been reported in human adults, infections typically result in transient neurologic debilitation (14). Conversely, death can occur in 5% of children (13). Comparative data are lacking for disease severity in older persons.

Transmission of P. cantonensis infection requires first-stage larvae (L1) from rat feces to infect and develop into the infective-stage (L3) within obligate gastropod intermediate hosts. Infection of rats and other mammalian hosts requires ingestion of L3, commonly through ingestion of infected gastropods. However, the L3 of P. cantonensis can also emerge in gastropod mucus trails and thereby contaminate surrounding vegetation (15). This mode of transmission was reported in a human outbreak of eosinophilic meningitis in Jamaica, where disease was correlated with eating Caesar salad (16).

The dispersal of P. cantonensis has, in some instances, been linked to the introduction of the African giant land snail, Achatina fulica (5). Three specimens of A. fulica were introduced into Miami, Florida, from Hawaii in 1966 (18). These exotic snails became established but were considered eradicated from Florida by 1975 (18). A survey of A. fulica in Hawaii in the mid-1960s showed that P. cantonensis infection was both highly prevalent and intense (19), which suggests that the parasite may have been introduced to Miami with the translocated snails in 1966. P. cantonensis was believed not to establish successfully (18). However, this event or a similar translocation involving less conspicuous exotic gastropods may have resulted in the inadvertent introduction of P. cantonensis. Live A. fulica are confiscated routinely from tourists returning to mainland United States from Hawaii, and 75 other exotic gastropod species have been introduced to the United States accidentally, inadvertently, or intentionally (20). The introduction of P. cantonensis with infected rats from areas where the parasite is endemic would be equally conceivable, as was proposed for its introduction to New Orleans, Louisiana (8).

P. cantonensis may be established in rat and gastropod populations in Miami. However, given the role of emergent L3 in transmission of infections (15,16), the L3 involved in the present case may have been acquired from contaminated vegetation supplied commercially from another region. The gibbon in this report was fed a commercial monkey chow and a variety of produce both grown locally and imported from several regions of North, Central, and South America. P. cantonensis is not known to be in any of these supply regions. The source of P. cantonensis in the gibbon infection remains to be determined. However, P. cantonensis was definitely introduced to Miami through the translocation of either infected animals or contaminated plants.

Future investigations aim to conduct parasitologic surveys of rats and gastropods in Miami, Florida, and develop molecular tools for specific identification of P. cantonensis. The specific source of infection in the present case report remains unknown. However, our report indicates that infection with P. cantonensis should be included as a differential diagnosis for instances of neurologic disease in human and nonhuman primates, as well as in wildlife and veterinary species in the southeastern United States.

Dr. Duffy is a research associate at the James A. Baker Institute for Animal Health, Cornell University. His research interests include neurotropic parasitic nematodes and acquired immunity to these infections.

We thank Judith Appleton and Dwight Bowman for advice, assistance, and use of microscopes and imaging equipment and Paige Adams for helpful comments on the manuscript.