Of the first 10 patients in the epidemic of severe acute respiratory syndrome (SARS) in Taiwan, 4 were closely associated with a SARS patient in an airplane. Loose stools or diarrhea, hemophagocytosis syndrome, and high serum levels of interleukin (IL)-6, IL-8, and tumor necrosis factor-α associated with lung lesions were found in all 10 patients.

In November 2002, severe acute respiratory syndrome (SARS), a highly contagious febrile respiratory illness with a high propensity to spread to a patient’s household members and healthcare workers, emerged and eventually caused worldwide outbreaks (1–9). By late February 2003, SARS was considered an emerging disease (10). Most SARS cases have occurred in China, the Hong Kong Special Administrative Region, Canada, and Taiwan (1–9). As of July 15, 2003, there were 671 probable cases of SARS in Taiwan; 84 were fatal.

From March 8 to April 16, 2003, the first 10 patients whose illness met the World Health Organization (WHO) case definition of probable SARS (10) were admitted to National Taiwan University Hospital. Three patients (patients 6, 7, and 8) were transferred to other hospitals after initial evaluation and treatment at the emergency department. 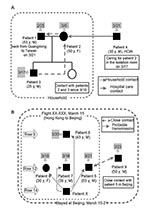 All 10 patients were Taiwanese; 7 had recently returned to Taiwan from China (2 from Guangdong Province, 5 from Beijing), 2 were family members, and 1 was a healthcare worker. Among the 10 patients, two clusters involving 9 patients were identified. Transmission among the four patients of cluster A occurred after household contact with the index case-patient (patient 1) or contact with patient 2 in a healthcare setting (Figure 1A). Transmission between the five patients of cluster B was associated with close contact with a SARS patient (patient X) on an airplane (Figure 1B). Patient 9 did not fly with the four patients but had contact with them in Beijing, particularly with patient 5.

Clinical features and laboratory characteristics of the 10 SARS patients are summarized in the Table. The patients were 26–53 years old (mean 42.7 years); eight were men. All of these patients were previously healthy. The incubation period was 2–12 days. Loose stools or diarrhea developed within 2 to 10 days in eight patients after the onset of fever. Acute respiratory distress syndrome necessitating mechanical ventilation developed in four patients (patients 1, 2, 3, and 9). All but one patient (patient 6) had high C-reactive protein (CRP) values (range 21.9 mg/L–>120 mg/L) at admission. Among the seven patients whose serum ferritin and creatinine phosphokinase levels were available, five had elevated creatinine phosphokinase (range 174 IU/L–3,422 IU/L), and all had high ferritin levels (range 590 μg/L–4,984 μg/L). Among the four patients (patients 2, 4, 5, and 9) whose follow-up CRP data were available, rising CRP levels were correlated with clinical deterioration (progression of lung infiltrate and aggravation of respiratory distress). A similar correlation was found for serum ferritin levels.

The findings of chest radiographs obtained at admission for the 10 patients ranged from subtle changes, primarily involving reticular interstitial patterns (patients 2 and 10), to focal patchy consolidation (patients 3 to 9), or multilobar patchy consolidations (patient 1). Unilateral opacity occurred predominantly in the upper lung zones. Rapid progression of the lung infiltrate was found in six patients (patients 1–5 and 9). Pleural effusion was found in one patient (patient 1) when he underwent a lung biopsy. Pneumomediastinum developed in one patient (patient 3) 2 days before he underwent endotracheal intubation.

All but patient 1 received ribavirin treatment (Figure 2). Eight patients also received intravenous corticosteroid simultaneously or 1–6 days after ribavirin treatment was initiated, when the patients had persistent fever and worsening lung opacities. The clinical conditions of patients 2 and 3 continuously deteriorated despite the use of ribavirin and corticosteroid. Intravenous immunoglobulin (IVIG) was administrated to treat hemophagocytosis syndrome. Because of the observed effectiveness of IVIG in patient 2, IVIG was administered early (before or simultaneously with corticosteroid) in another four patients (patients 3, 4, 5, 9), whether or not the patient’s condition was deteriorating.

All seven patients (patients 1–5, 9, and 10) had documented infection with SARS-associated coronavirus (CoV) on the basis of positive reverse transcription–polymerase chain reaction (RT-PCR) (polymerase gene) results for their various respiratory and serum samples, positive cultures for SARS-CoV (patients 3, 4, and 9), increased immunoglobulin (Ig) G levels (patients 1–5, and 9), or all of the above (7). The genomes of the three SARS-CoV isolates all were 29,729 nt in length. The sequence of the genome of SARS-CoV from patient 3 (TW1) (GenBank accession no. AY291451) (7) was identical to that of the isolate from patient 4 (TW2). Two nucleotide differences, one in an open reading frame (position 3,165) and one in spike glycopeptide (position 26,477) were found between TW1 and the isolate from patient 9 (TW3).

Histologic examination of the lung biopsy specimen, which was performed on patient 1 on day 18 after onset of illness, showed diffuse interstitial pneumonitis (Figure 3A). In addition, syncytial giant cells were scattered in the areas of organizing pneumonia (Figure 3B). No definite intracytoplasmic or intranuclear inclusion was seen, however. Immunohistochemical study showed that the inflammatory cells infiltrating in the interstitia were predominantly CD68 (Dako, Santa Barbara, CA; 100X) positive histiocytes (Figure 3C) and some CD3 (Dako, 100X) positive T lymphocytes. No CD20 (Dako, 100X) positive B lymphocyte or CD56 (Novocastra Laboratory, Tyne, UK; 100X) positive NK cell was found. Pancytopenia developed within 1 to 2 days after ribavirin therapy was initiated and coincidentally when the lung lesions in two patients (patients 2 and 7) were deteriorating and the patients had persistent fever and elevated levels of aspartate aminotransferase and alanine aminotransferase. Bone marrow studies of these two patients disclosed hemophagocytosis (Figure 3D) compatible with a diagnosis of hemophagocytosis syndrome. Results of the RT-PCR assay for these two biopsy specimens were negative. 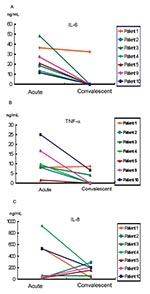 Serum samples from the seven patients (patients 1–5, 9, and 10), collected in both the acute stage (3 to 4 days before the pulmonary lesion deteriorated) and the convalescent stage (4–6 days after the fever subsided), were subjected to cytokine analysis. Serum levels of interleukin (IL)-1β, IL-6, IL-8, and tumor necrosis factor α (TNF-α) were determined by using an immunometric assay (IMMULITE, Diagnostic Products Corporation, Los Angeles, CA). All of the serum samples were negative for IL-1β, except for those collected 2–3 days after admission from two patients who had mildly elevated values (patients 5 and 10) (6.8 μg/L and 7.7 μg/L, respectively; reference levels, <5 μg/L). In general, IL-6 and TNF-α levels were high in the acute stage and declined in the convalescent stage (Figure 4). The mean values of TNF-α (reference levels <8.1 pg/mL), IL-6 (reference levels <9.7 pg/mL), and IL-8 (reference levels <62 pg/mL) in the acute stage were 8.83 pg/mL, 27.52 pg/mL, and 266.10 pg/mL, respectively; in the convalescent stage, they were 2.13 pg/mL, 5.42 pg/mL, and 157.15 pg/mL, respectively.

Patient 1 did not receive corticosteroid or IVIG treatment. This patient’s levels of TNF-α and IL-6 were high in the early stages of disease and decreased thereafter. The levels of IL-8 in the acute stage in three patients (patients 3, 4, and 9) were high when their clinical condition deteriorated. Although patient 10 lacked an antibody response to SARS-CoV 24 days after illness onset, the changes in IL-6, IL-8, and TNF-α were similar to those of the other six patients.

This study had four important findings. First, there was a high incidence of loose stools or diarrhea in these patients shortly after the onset of febrile episodes and before respiratory symptoms developed. These gastrointestinal manifestations suggest the possibility of viral involvement in the gastrointestinal tract. Although stool cultures from patients 2 and 5 did not grow SARS-CoV, and RT-PCR results for SARS-CoV in these samples were also negative, a previous report clearly demonstrated SARS-CoV RNA in feces of SARS patients (11).

Second, this study describes, for the first time, finding hemophagocytosis in SARS patients. Bone marrow study should be performed whenever progression of pancytopenia is evident. Moreover, the finding of progression of lung lesions along with pneumomediastinum before endotracheal intubation, which occurred in patient 3, has not been previously reported. This condition might have resulted from extensive alveolar damage. Pleural effusion, as seen in patient 1, has also rarely been previously reported (1–9).

Third, clustering of cases among passengers sitting near a SARS patient during a flight is interesting and important. Due to the closeness of the time of onset of illness in the four patients, a common source is likely and suggests the possible transmission of SARS during the flight.

Finally, levels of certain proinflammatory cytokines, such as IL-6, IL-8, and TNF-α, increased markedly in the acute stage (“cytokine storm”) and decreased in the convalescent stage of illness. The data were correlated with the pathologic findings of prominent infiltration of the histiocytes (HLA-DR+CD68+ cells) in the lung and also with the strikingly increased levels of serum CRP and ferritin in the acute stage (12). The levels of cytokines, CRP, and ferritin returned to normal after the patient showed clinical improvement with adequate immunosuppressive treatment. Nevertheless, the immunopathologic changes of cytokines need further investigation because of concurrent bacterial coinfections and the simultaneous use of immunomodulatory agents in our patients (12,13).

Although all of our patients were admitted to negative-pressure isolation rooms that were operated according to strict infection control measures, various nosocomial infections developed in four patients who received mechanical ventilation as well as broad-spectrum antimicrobial agents. Exogenous acquisition of these multidrug-resistant bacteria or Candida species from the hospital environment or endogenous selection or induction of resistant organisms under the strong antimicrobial pressure may have both contributed to this phenomenon.

The genetic differences among isolates involved in different nosocomial epidemics need to be compared for efficacious control and prevention of resurgence of this disease (14,15). Previous study indicated that analysis of spike glycoprotein sequences SARS-CoV was useful as a molecular epidemiologic tool (14). Differences of only 2 nt were found between the two SARS-CoV isolates (TW1 and TW3) recovered from patients in the two clusters of infection (7). These findings suggest that these two isolates were closely related and most likely originated from China.

In this study, IVIG was administered early in infection in four patients, whose pulmonary status apparently worsened before IVIG treatment was begun on the basis of its perceived efficacy in another patient. However, each of these patients also received corticosteroid at the same time or soon after, and other factors (delay in start of therapy or different inocula of virus) were possibly associated with the more severe outcome, making it impossible to make a conclusive statement on the role of IVIG on SARS management on the basis of these data alone.

In summary, we described a possible transmission of SARS in an airplane, the occurrence of hemophagocytosis in this newly identified viral infection, and the correlation between serum cytokine levels and clinical course of SARS patients. The lack of a control group in this study makes it impossible to reach any definite conclusions about pathogenesis of illness or efficacy of different treatment modalities.

We thank Ding-Shinn Chen for his critical review and constructive comments on this manuscript and the many members of the frontline medical and nursing staff and laboratory personnel of National Taiwan University Hospital for their devotion to the management of these patients.

1Pan-Chyr Yang and Chuan-Liang Kao contributed equally to this article.

Page created: June 14, 2011
Page updated: June 14, 2011
Page reviewed: June 14, 2011
The conclusions, findings, and opinions expressed by authors contributing to this journal do not necessarily reflect the official position of the U.S. Department of Health and Human Services, the Public Health Service, the Centers for Disease Control and Prevention, or the authors' affiliated institutions. Use of trade names is for identification only and does not imply endorsement by any of the groups named above.