Disease transmission forecasts can help minimize human and domestic animal health risks by indicating where disease control and prevention efforts should be focused. For disease systems in which weather-related variables affect pathogen proliferation, dispersal, or transmission, the potential for disease forecasting exists. We present a seasonal forecast of St. Louis encephalitis virus transmission in Indian River County, Florida. We derive an empirical relationship between modeled land surface wetness and levels of SLEV transmission in humans. We then use these data to forecast SLEV transmission with a seasonal lead. Forecast skill is demonstrated, and a real-time seasonal forecast of epidemic SLEV transmission is presented. This study demonstrates how weather and climate forecast skill verification analyses may be applied to test the predictability of an empirical disease forecast model.

St. Louis encephalitis virus (SLEV) is a mosquito-borne pathogen that is prevalent throughout much of North America. Florida is subject to periodic outbreaks of SLEV; five epidemics (>20 human clinical cases) have been recorded in south Florida since 1952 (1). The most recent epidemic occurred in 1990 when 226 clinical cases and approximately 30,000 infections were reported throughout south-central Florida. Indian River County was the epicenter of this outbreak (2).

A rationale for this empirical relationship was suggested by mosquito collection data, also from Indian River County from 1986 to 1991. Culex nigripalpus Theobald is the demonstrated enzootic and epidemic vector of SLEV in south Florida (8–10). Collections of Cx. nigripalpus were made in the densely vegetated “hammock” habitats used by this species for daytime resting. During the driest conditions (i.e., modeled WTDs <-1.45 m) preceding heavy SLEV transmission, the numbers of Cx. nigripalpus dramatically increased (6) (Figure 1). Rather than indicating an increase in mosquito abundance, these data suggest that drought restricts Cx. nigripalpus flight activity to woodland habitats. Extreme droughts in south Florida tend to occur during the spring when nesting wild birds also make use of the hammocks. Thus, drought drives the mosquitoes and birds into contact with one another. This forced interaction of vector mosquitoes and susceptible avian hosts provides an ideal environment for the rapid epizootic amplification of SLEV. Subsequently, when the drought ends and water resources increase, infected mosquitoes and birds disperse from the hammocks and initiate the early transmission phase of the Florida SLEV cycle.

Hydrologic modeling follows the methods set forth in Shaman et al. (6). See Appendix A for details. The hydrology model was run from January 1949 through June 2002 and provided a daily time series of mean WTD for the study area. Model validation was conducted by using groundwater well measurements and surface (canal) water levels provided by the St. John’s Water Management District and U.S. Geological Survey (USGS) sources. Partitioning of runoff and evapo-transpiration matched bulk estimates derived from USGS sources (11). See Shaman et al. (12) for a complete description of this validation. 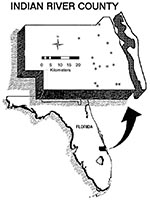 Changes in the annual timing and distribution of SLEV transmission to sentinel chickens have been strongly correlated with SLEV disease in humans (1). We used data from 15 different sentinel flocks, posted in Indian River County from 1978 to 2002 and maintained by personnel from the Indian River Mosquito Control District. For any given year, a maximum of eight flocks were in operation for 5 to 12 months of the year. At each site, four to six sentinel chickens were posted. Figure 2 provides a map of the region of study and flock locations.

Generally, a 1.0 mL blood sample was drawn weekly from each bird during peak transmission periods (July through November), and twice a month during the rest of the year. Blood samples were assayed for HI antibodies to SLEV at the Florida Department of Health and Rehabilitative Services, Tampa Branch Laboratory. Individual chickens that tested positive for HI antibodies were replaced with fresh ones, and the entire flock was replaced each spring.

High rates of sentinel chicken seroconversion are of principal interest to public health workers. These high levels of transmission connote the existence of large numbers of SLEV-infected mosquitoes and so identify times when humans are at greatest risk. We therefore define this category as epidemic transmission, which uses all the sentinel chickens in aggregate. It, too, is a categoric measure: one if ≥ 20% of posted chickens are seropositive in a given week; zero if ≤ 20% of the sentinel chickens are seropositive. These two categories represent epidemic level transmission and all other states, respectively (13).

All three types of SLEV transmission (transmission incidence, transmission number, and epidemic transmission) were defined as categoric variables. Univariate and bivariate logistic regression were used to associate the probability of each of the types of SLEV transmission with single weekly lags of modeled WTD and combinations of two lags of WTD. We defined antecedent as the longer lag, and near coincident as the shorter lag. To account for the apparent dependence among chickens in the transmission number category, we performed these logistic regression using generalized estimating equations with a working correlation ranging from r = 0–0.6, following the methods of Liang and Zeger (14). Dummy variables were also included to account for the 15 sentinel flock sites.

where P is the probability of SLEV transmission for a given WTD, and a and b are model parameters. See Appendix C for further description of the empirical methods.

The skill score (SS) is computed directly from the Brier scores.

Significance of the skill score value was assessed by using a Monte Carlo procedure. The null hypothesis is that the forecasts have no greater skill than modeled WTD climatology. No skill forecasts were simulated by randomly selecting weekly modeled WTD values from the 1949–1997 simulation record. One thousand such forecasts were made, and a mock SS was calculated for each. From this distribution of mock SS values, significance of the actual SS value was determined.

Figure 3 presents the 1978–1997 time series of weekly modeled WTD and the weekly percentage of posted chickens testing seropositive for HI antibodies. As was shown previously for 1986–1991 (6), SLEV transmission tends to occur during times of high modeled WTD after periods of low modeled WTD.

Probabilities predicted with the 1986–1991 logistic regression model equation for epidemic SLEV transmission range from 0 to nearly 1 when combined with realistic modeled WTD scenarios (Figure 4a). These high probabilities are a consequence of the short record, which is centered upon an epidemic that began in Indian River County. Few other factors contributed to transmission during this period, and consequently there is little noise in the record.

The Brier skill score was calculated for the weekly January 1998–June 2002 retrospective forecast of epidemic SLEV transmission. A high level of skill is found (SS = 0.461) and is shown to be statistically significant (p < 0.001).

The longer 1978–1997 record accounts for a wider variety of modeled wetness conditions and encompasses a longer, noisier record of sentinel chicken data, in which confounding factors, such as avian host susceptibility and host and vector mobility, may be strongly affecting transmission levels. Consequently, while not providing the same mechanistic insight into amplification dynamics as the shorter 1986–1991 record, empirical relationships derived from the 1978–1997 record provide a more realistic prediction of SLEV transmission based on modeled WTD.

We have shown that the TBH model can be used to predict SLEV transmission. Other hydrology models might also be developed and their simulations compared with those of the topographically based hydrology model. Such models would have to capture the spatial and temporal variability of near surface wetness conditions and be easily calibrated and computationally efficient. The TBH model was calibrated for 1983 to 2001 (12), but before this period, changes to the Florida landscape may have occurred. These changes, including increased channelization and urbanization, could be corrupting model simulation accuracy before 1983, and will need to be explored in more detail in the future.

A forecast of SLEV transmission should incorporate additional information regarding the dynamics of the avian hosts, mosquito vector, and virus. For instance, monitoring of avian host susceptibility to the SLEV, in addition to modeling of local hydrology, is needed to determine whether conditions ideal for amplification exist. Remote sensing data should also be incorporated to delineate the effects of changes in land use, urbanization, and habitat fragmentation. Future investigations might also characterize the direct effects of large-scale climate phenomena, such as the El Niño-Southern Oscillation or North Atlantic Oscillation, on SLEV transmission. Such information would help further constrain epidemic SLEV transmission forecasts and permit more accurate identification and prediction of local amplification “hot spots” throughout south-central Florida. Such forecasts could be run operationally at the state and county level in conjunction with water management and public health agencies. Forecasts of epidemic SLEV transmission in excess of climatology would then warrant response and the targeting of mosquitoes during the amplification phase.

Whether other, past south Florida SLEV epidemics conformed to similar amplification dynamics, epicenters for these epidemics must be identified, and the local hydrology modeled to determine whether a similarly timed drought and wetting pattern preceded SLEV transmission. The findings of such studies will no doubt modify the empirical relationship between modeled local hydrologic conditions and epidemic SLEV transmission (equation 2). Research is also under way to determine whether West Nile virus transmission is similarly affected by hydrologic variability. By accounting for the interaction of the physical (climate) and biologic (vector, pathogen, and host) systems, a more robust means of monitoring and forecasting disease should be attained.

Dr. Shaman is a National Oceanic and Atmospheric Administration postdoctoral fellow in climate and global change at Harvard University. His research interests include climatology, hydrology, vector-borne diseases, and mosquito ecology.

We thank D. Lohmann and B. Cosgrove for provision of the Global Energy and Water Cycle Experiment (GEWEX) Continental Scale International Project (GCIP) Land Data Assimilation System forcing datasets; Lillian Stark and her staff at the Florida Department of Health Tampa Branch Laboratory for their analysis of sentinel chicken and wild bird serum samples; and P. Shaman for many helpful statistical discussions.