A more subtle issue deals with the attempt to predict the trend of an epidemic from limited data during early stages of the epidemic which is often futile and sometimes misleading (3). Nevertheless, early prediction of the magnitude of an epidemic outbreak is immeasurably more important than retrospective studies. But how early is too early? Intuitively, the cumulative case curve will always be S-shaped and well-described by a logistic-type model. The essential factor is the time when the inflection of the cumulative case curve occurs, i.e., the moment when a rapid increase in case numbers is replaced by a slower increase. Since the inflection point, approximated by tm (1), dictates the point in time when the rate of increase of cumulative case numbers reaches its maximum, the moment marks the key turning point when the spread of the disease starts to decline. As long as the data include this inflection point and a time interval shortly after, the curve fitting and predicting future case number will be reasonably accurate. 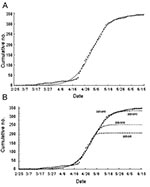 Moreover, the case number data are sorted by onset date. Given a mean SARS incubation of 5 days (4–6 days) (5), the inflection point for SARS in Taiwan could be traced back to 5 days before May 3, namely April 28. On April 26, the first SARS patient in Taiwan died. Starting April 28, the government implemented a series of strict intervention measures, including household quarantine of all travelers from affected areas (6). In retrospect, April 28 was indeed the turning point of the SARS outbreak in Taiwan.

To address making projections during an ongoing epidemic, we used the same dataset but used various time intervals (all starting February 25) but truncated at various dates around the inflection point of May 3. The resulting parameter estimates are given in the Table of the Appendix. For the truncated data ending on April 28 before the inflection, an unreasonable estimate of K = 875.8 was obtained. However, if we use the data ending on May 5, May 10, May 15, and May 20, we obtain estimates of K = 204.9, 253.1, 334.2, and 342.1, respectively. These estimates improve as we move further past the inflection time of May 3 (Figure). Moreover, the last estimate, using data from February 25–May 20 only, produces a 1.1% error from the eventual cumulative case number of 346, with 95% CI of 321.5 to 362.6. This retrospective exercise demonstrates that if the cumulative case data used for predictive purpose during an outbreak contain information on the inflection point and approximately 2 weeks afterwards, the estimate for the total case number can be obtained with accuracy, well before the date of the last reported case. This procedure may be immensely useful for deciding future public health policies although correctly determining the true inflection point during a real ongoing epidemic calls for scrutiny and judicious use of the model, as with all mathematical epidemic models.

In Reply: Our analysis of the dynamics of reported severe acute respiratory syndrome (SARS) clinical cases was conducted in May 2003 during the height of the public panic (1). Our primary goal in that study was to predict “when the epidemic might be brought under control if the current intervention measures were continued” (1). We used the Richards model and successfully predicted the epidemic cessation dates in Beijing, Hong Kong, and Singapore. Our predicted total number of SARS cases was close to the actual number of cases. In addition, we estimated the basic reproductive rate (R0) of SARS infection, and our estimates based on the deterministic model were similar to those based on stochastic models (2,3). Therefore, our analysis provided useful information on the epidemiologic characteristic of SARS infections in three major Asian cities.

Hsieh et al. (4) commented that our article did not address the effect that specific intervention measures might have on the dynamics of SARS infection. Our study was not intended to measure this. As we stated in our article, “the transmission mechanism of the coronavirus that causes SARS and the epidemiologic determinants of spread of the virus are poorly understood.” Any models built on these unknowns are not suitable for assessing the effects of specific intervention measures. A method suggested by Hsieh et al. (4) to merely “consider a more complicated model with variable maximum case load and growth rate” will not answer the question to any extent.

The retrospective analysis of SARS case dynamics in Taiwan by Hsieh et al. (4) found that “as long as the data include this inflection point and time interval shortly after, the curve fitting and predicting future case number will be reasonably accurate.” This notion holds only if the true inflection point is known before an epidemic ends. The main difficulty is how the true inflection point is correctly determined, as noted by Hsieh et al. (4). The time when inflection occurs varies tremendously if truncated data of cumulative SARS case numbers are used. To illustrate this point, we used the cumulative number of reported probable SARS cases in Hong Kong, starting March 17, 2003, but truncated at various dates, and calculated the date when inflection occurred (Table). For example, if the data period from the onset date (March 17, 2003) to the last case reported (June 12, 2003) was used, the date when inflection would occur was estimated as March 19, 2003. If the truncated data ending April 9, April 16, April 30, May 14, and May 28, 2003, were used, the dates when inflection would occur were estimated as April 2, February 7, March 3, March 23, and April 2, 2003, respectively (Table). Clearly, inflection point dates became a moving target as the epidemic progressed. When truncated data ending April 9, April 16, April 30, May 14, and May 28, 2003, were used, the corresponding estimated the maximum numbers of cumulative cases (K) were 1,107, 1,907, 1,819, 1,749, and 1,733, respectively. Estimation of K improved when the data period used for prediction was at least 1 month past the March 19 inflection point obtained from the entire epidemic period. This analysis highlights the difficulty in identifying an optimal inflection point for prediction purposes during an ongoing epidemic when only a partial cumulative case number is available.

We fully agree with Hsieh et al. (4) that the quantitative assessment of the effectiveness of public health intervention measures for SARS is a difficult task for modelers. To make models useful for assessing the effects of specific intervention measures and for predicting the future dynamics during an ongoing epidemic, we need improved knowledge on the transmission mechanisms, pathogenesis, and the epidemiologic determinants of the spread of the virus. Any retrospective analysis of the 2003 SARS epidemic that improves our knowledge of SARS epidemiology is welcome.

Page created: June 14, 2011
Page updated: June 14, 2011
Page reviewed: June 14, 2011
The conclusions, findings, and opinions expressed by authors contributing to this journal do not necessarily reflect the official position of the U.S. Department of Health and Human Services, the Public Health Service, the Centers for Disease Control and Prevention, or the authors' affiliated institutions. Use of trade names is for identification only and does not imply endorsement by any of the groups named above.