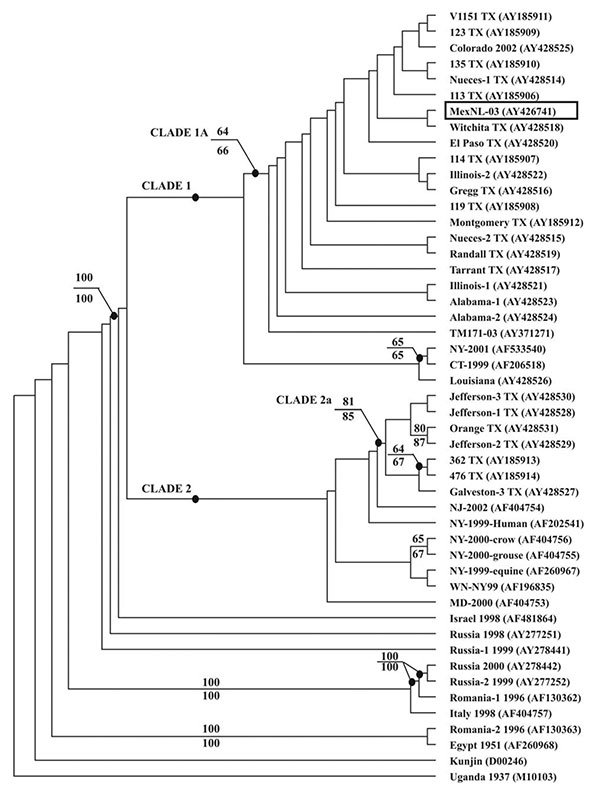 Figure 1. Phylogenetic analysis of West Nile virus (WNV) from Nuevo Leon State, Mexico. Phylogenies were estimated using the program MRBAYES, version 2.0 (15). Sampling of trees from the posterior probability distribution used the Metropolis-coupled Markov chain Monte Carlo algorithm to allow running of multiple Markov chains. A run with four chains was performed for 90,000 generations, under a general time-reversible model (all six types of substitutions occur at different rates) with parameter value estimation for base frequencies, substitution matrix values, and rate heterogeneity. Rate heterogeneity was estimated using a γ distribution for the variable sites and assuming a certain portion of sites to be invariable. The burn-in time was 70,000 generations. The phylogenetic analysis is based on the 2004-nt fragment encoding the complete prM-E genes of 49 WNVs. The tree is rooted by using the prototype WNV strain from Uganda in 1937 (GenBank accession no. M10103) as an outgroup. Values above some branches represent the percent support by parsimony bootstrap analysis. Values below some branches represent the percentage support by distance bootstrap analysis. The bootstrap confidence estimates are based on 1,000 replicates. The WNV from Nuevo Leon State is encapsulated.