Nephropathia epidemica, caused by Puumala virus (PUUV) infection, is a form of hemorrhagic fever with renal syndrome of variable severity. Early prognostic markers for the severity of renal failure have not been established. We evaluated clinical and laboratory parameters of 15 consecutive patients with acute PUUV infection, which is endemic in the Alb-Danube region, south Germany. Severe renal failure (serum creatinine >620 μmol/L) was observed in seven patients; four required hemodialysis treatment. Low platelet count (<60 x 109/L), but not leukocyte count, C-reactive protein, or other parameters obtained at the initial evaluation, was significantly associated with subsequent severe renal failure (p = 0.004). Maximum serum creatinine was preceded by platelet count nadirs by a median of 4 days. Thrombocytopenia <60 x 109/L appears predictive of a severe course of acute renal failure in nephropathia epidemica, with potential value for risk-adapted clinical disease management.

Worldwide, approximately 60,000–150,000 patients per year are hospitalized with hantavirus infections (1,2). Hantavirus spp. (Bunyaviridae family) are transmitted to humans by inhalation of aerosolized excreta of persistently infected rodents (3,4). Puumala virus (PUUV) is a representative of this genus responsible for most cases of hantavirus infections in northern Europe (1,5). The red bank vole (Clethrionomys glareolus) is the natural host reservoir of PUUV. Nephropathia epidemica attributable to acute PUUV infection is a mild form of hemorrhagic fever with renal syndrome (1,4–6). Endemic seasonal outbreaks of PUUV infections are common in Scandinavia, but outbreaks in central Europe are restricted to distinct regions, e.g., in South Germany (2,4,7).

Nephropathia epidemica is characterized by acute fever, headache, nausea, vomiting, myalgia, abdominal and loin pain, mild hepatitis and pancreatitis, and interstitial nephritis with acute renal failure. Hemodialysis is required in 10% to 30% of hospitalized patients with acute PUUV infections (8). A complete recovery of renal function is regularly achieved after several weeks (1,9). Acute renal failure in nephropathia epidemica is frequently accompanied by thrombocytopenia, elevated leukocyte count, proteinuria, hematuria, and low serum calcium (9–11), but early prognostic markers have not yet been established to identify patients at high risk for a severe course of acute renal impairment. We evaluated clinical and laboratory parameters that could predict the severity of acute renal failure suitable for risk-adapted disease management in patients with nephropathia epidemica.

From 1998 to 2001, all consecutive patients with nephropathia epidemica and serologically confirmed hantavirus infection were studied. Patients were admitted by physicians and regional hospitals to the nephrology division of the University Hospital of Ulm, a center of nephrology and infectious diseases in south Germany with a patient base of 100 km (radius) on both sides of the River Danube. Hemodialysis was started in patients with severe symptoms of uremia (serum creatinine >620 μmol/L, serum urea nitrogen >150 mg/dL, serum potassium >6.0 mmol/L, oliguria <500 mL/day, or progressive body weight increase with edema). After discharge, a follow-up examination of all patients was conducted in our outpatient clinic. Blood pressure, leukocyte count, hemoglobin, platelet count, prothrombin time, activated partial thromboplastin time, C-reactive protein, serum electrolytes, alanine aminotransferase (ALT), serum protein, serum creatinine, urea, proteinuria, and microscopic qualitative and quantitative (Addis count) urine analysis were evaluated. Clinical and laboratory data obtained before admission were also evaluated. The study protocol was approved by the Ethics Committee, University of Ulm, and written informed consent was obtained from all patients. Studies were conducted in accordance with the Declaration of Helsinki.

Nonparametric tests were used for statistical analysis (Fisher exact test, Mann-Whitney U test), and significance was set at a level of p < 0.05. No adjustment for multiple comparisons was made, and results were interpreted in an exploratory manner. All statistical analyses were conducted with SPSS 8.0 software package (SPSS Inc., Chicago, IL). If not indicated otherwise, data are given as median values with range (minimum to maximum).

Fifteen patients (mean age 37 ± 8 years; male:female ratio12:3) with nephropathia epidemica were treated at the University Hospital of Ulm from January 1998 to December 2001 (Table 1). PUUV infections varied in different years by number of patients and seasons with a high incidence (Figure 1: November to December 1998: 2 patients; 1999 none; January to May 2000: 9 patients; September to November 2001: 4 patients). All but one patient lived on the North side of the River Danube. No patient was working in agriculture, forestry, or other professions considered at high risk for contact with infected rodent excreta. Acute or chronic use of nonsteroidal antiinflammatory drugs was denied.

PUUV-reactive IgG and IgM antibodies were detected in all patients (Table 2). EIA-positive results were confirmed by at least one independent test (in-house EIA, IFA, IB). During the acute phase of PUUV infection, cross-reactive neutralizing antibodies to other hantavirus serotypes (HTNV, Tula virus) were detected in two patients (c-FRNT), but PUUV infection was confirmed in the convalescent-phase infection by high endpoint titers for PUUV antibodies compared to other hantavirus serotypes. Because of the limited quantity of serum specimens, the complete array of virologic tests was not performed in all samples, but available serologic data demonstrated acute PUUV infections in all patients (Table 2).

In all patients, a combination of low platelet count (<150 x 109/L), elevated serum creatinine (>150 μmol/L), or elevated C-reactive protein (>10 mg/L) was detected. In seven patients (47%), severe acute renal impairment with a serum creatinine >620 μmol/L developed; four (27%) of these patients required hemodialysis as an acute intervention for 3 days (range 2–9 days) because of symptoms of uremia. During hospital stay, polyuria (>3 L/day) was present in only three patients (20%), and no patient became anuric (<500 mL/day). Serum protein was >60 g/L in all patients, plasma coagulation parameters were not altered, and mild bleeding signs (subconjunctival bleeding, petechia) were present in only three patients with a platelet count <60 x 109/L. Patients remained in the hospital for 10 days (range, 5–19 days), and follow-up examination was conducted at our outpatient clinic for 5 months (range 0.2–12.5 months). 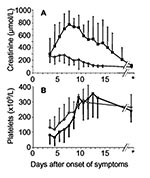 In patients with severe renal failure, platelet count nadirs preceded maximum serum creatinine values by 4 days (range 2–10 days). In patients with a mild or severe course of acute renal failure, the platelet count was different at initial evaluation (p = 0.04), but serum creatinine values at initial evaluation did not differ (p = 0.15). We analyzed the potential prognostic value of low (<60 x 109/L) and moderately decreased (>60 x 109/L) platelet count for the severity of subsequent renal failure. This value represented the median of all patients at first evaluation, which generated two equally sized patient cohorts.

The time interval between initial clinical symptoms and first laboratory evaluation did not differ in the two groups (2 days, range 0–6 days). A platelet count of <60 x 109/L preceded severe renal failure in six of seven patients, and all patients with hemodialysis had a platelet count <60 x 109/L in the early phases of infection. Acute severe renal impairment (sensitivity 0.86, specificity 0.88, positive predictive value 0.86) developed in one of eight patients with a platelet count >60 x 109/L. The initial serum creatinine value was not different in the two groups (p = 0.54, Mann-Whitney U test), but the maximum value was significantly higher in patients with a platelet count of <60 x 109/L during the early phase of infection (Figure 3A). Although associated with a severe course of nephropathia epidemica (Table 1), an increased leukocyte count at first examination was not predictive of the severity of subsequent renal failure (Figure 3B).

Early prognostic parameters for the course of renal impairment might be beneficial for risk-adapted disease management of nephropathia epidemica, but they have not been established to date (1,14). Thrombocytopenia is a well-known transient symptom of this condition (15), and we found that severe thrombocytopenia (<60 x 109/L) was a prognostic parameter predictive for consecutive severe acute renal failure (serum creatinine >620 μmol/L).

In Germany, the hantavirus seroprevalence in humans is 1%–2%, but higher seroprevalences are found in disease-endemic regions, such as the Alb-Danube Region, south Germany (16). Most of our patients might have acquired PUUV infection during leisure activities, as occupations were not found to be risk factors in this study. Fluctuations of infected rodent populations may be responsible for the seasonal and endemic outbreaks of PUUV infections (4,6–18). Most patients with nephropathia epidemica resided to the north of the River Danube (Figure 1), which raises the possibility that the river acts as a geographic barrier for the migration of PUUV-infected rodent populations. However, direct evidence for this assumption was not provided in this study.

The diagnosis of an acute PUUV infection is established by detecting PUUV-specific IgM antibodies (19). Cross-reactive neutralizing antibodies to closely related hantavirus serotypes are common in the early but not in the convalescent phase of infection (20,21), as observed in two patients. In all patients, acute PUUV infection was proven by the different serologic tests, which were equally able to discriminate various hantavirus serotypes (Table 2).

A specific therapy for nephropathia epidemica is not generally applicable, but a symptomatic therapy including hemodialysis may be individually required. If the platelet count is <60 x 109/L in the early phase of infection, acute renal failure with serum creatinine >620 μmol/L is impending, and a tight control of clinical and laboratory parameters, including hospitalization, is mandatory. A platelet count >60 x 109/L in the early phase of infection is predictive for mild renal failure, and outpatient treatment might be possible in absence of uremia, anuria, pulmonary symptoms, or other signs of severe infection. If a patient’s platelet count has not dropped below 60 x 109/L before day 6 after initial symptoms, the clinician may feel relatively comfortable predicting that severe renal failure will not occur. Later phases of infection are characterized by increased serum creatinine values but normalizing platelet counts (Figure 2). Early dischrage from hospital may be justified in all patients at low risk for consecutive severe acute renal failure and in all patients with ongoing reconstitution of renal function. Thus, platelet counts obtained during the early phase of infection are suggested as a promising parameter for a risk-adapted, cost-effective disease management.

Dr. Rasche is a staff physician and senior scientist in the Section of Nephrology, Department of Internal Medicine II, University of Ulm, Germany. He is author of Virtual Policlinic/Docs’n Drugs, a Web-based teaching program for university medical education supported by the State Ministry of Education, and he is co-author of the Guidelines of Robert Koch Institute, Berlin. His research interests are the pathogenesis and treatment of acute and chronic renal failure.