Of the more than 2,000 nontyphoid Salmonella serotypes, Salmonella enterica serotype Choleraesuis is extremely invasive and usually associated with bacteremia in humans. Before 1999, this serotype was susceptible to fluoroquinolones (1). Since 2000, we have recorded rapidly increasing resistance to ciprofloxacin in S. Choleraesuis isolated from both human and swine sources in Taiwan (2). This finding is a cause for concern because fluoroquinolones are first-line drugs to treat systemic, nontyphoid salmonellosis. We conducted a prospective, laboratory-based surveillance study of fluoroquinolone resistance in S. Choleraesuis isolated from humans in four major teaching hospitals across Taiwan from 2000 to 2003. 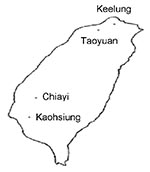 Figure 1. Geographic position of the four hospitals where Salmonella enterica Choleraesuis isolates were collected and surveyed for their susceptibility to ciprofloxacin, 2000–2003.

Chang Gung Memorial Hospital in Keelung is a 1,000-bed hospital. Chang Gung Memorial Hospital in Taoyuan, which includes Chang Gung Children’s Hospital, is located in Taoyuan and has a capacity of 4,000 (which includes an additional 500 beds for Chang Gung Children’s Hospital). Chang Gung Memorial Hospital in Kaohsiung, in southern metropolitan Taiwan, is a 2,000-bed hospital. Chang Gung Memorial Hospital in Chiayi, which was open for service in December 2001, is an 800-bed hospital. All four are teaching hospitals affiliated with Chang Gung University in Taoyuan, Taiwan. The geographic locations of these hospitals are shown in Figure 1. All S. Choleraesuis isolates were cultured and identified according to standard methods (3) in the clinical microbiologic laboratories of the four hospitals. No major changes were made in the policy concerning identification of Salmonella during the study years. Salmonella isolates were first checked with O antisera (Becton Dickinson and Co., Franklin Lakes, NJ) for their serogroups by the slide agglutination method. Because it causes invasive infections, S. Choleraesuis was specifically identified if a negative result was found in the citrate utilization test for any isolate identified as serogroup C1 Salmonella. H antiserum has been used to verify the accuracy of this procedure in our previous studies (1,2). The susceptibility to ciprofloxacin of the isolates was investigated by a standard disk-diffusion method (4). Susceptible or resistant isolates were defined according to the criteria suggested by the National Committee for Clinical Laboratory Standards (4); isolates in the intermediate category were deemed as resistant in this study.

Figure 2. The annual isolate number (in bars) and the rate of ciprofloxacin resistance (in lines) among the isolates from the four hospitals in which Salmonella enterica Choleraesuis isolates were collected and surveyed...

However, this highly invasive serotype is of particular concern in Taiwan; it was the second most common Salmonella isolate found in humans in two independent epidemiologic surveys (6,7). The reason for the difference between Taiwan and United States is an issue of interest. S. Choleraesuis is highly host-adapted to pigs. We have found that S. Choleraesuis isolates from humans and swine had the same or similar DNA fingerprints, which suggests that human infections were derived from pigs (2). Such infection likely arose as a result of the contamination of a food or water source. Eating pig offal by the local population likely contributed to the high prevalence of S. Choleraesuis infection in some areas of Taiwan.

Results of this surveillance study reflect the current status of fluoroquinolone resistance in S. Choleraesuis in Taiwan. The four hospitals surveyed in this study are located in different regions across Taiwan, the surveillance is prospective and longitudinal in design, and the overall isolate number examined is large enough to draw a conclusion. Minor geographic variation in the rate of ciprofloxacin resistance was observed. Among the four hospitals surveyed, Chang Gung Memorial Hospital in Kaohsiung is the only one located in a metropolitan area. Sanitation in a metropolitan area is better than that in the rural or country areas. The spread of resistant clones, therefore, may be slower in this area, as reflected by the lower number of S. Choleraesuis infections treated in Kaohsiung Chang Gung Memorial Hospital compared to those treated in Linko Chang Gung Memorial Hospital. Moreover, most pig farms are not located in large cities. These factors might explain why the spread of resistance in Kaohsiung was slower than in other regions before 2002. In contrast, isolates from Chiayi Chang Gung Memorial Hospital, which is located in the underdeveloped, southwestern coastal region of Taiwan, showed the highest rate of resistance to ciprofloxacin in 2002. The up-to-date data obtained in 2003 confirmed a wide dissemination of ciprofloxacin-resistant S. Choleraesuis across Taiwan.

We have found that all of the resistant strains carried mutations that give rise to the substitution of phenylalanine for serine at position 83 and asparagine for aspartic acid at position 87 in GyrA (2). In addition, mutations leading to an amino acid change from serine to isoleucine at position 80 in ParC were demonstrated in the ciprofloxacin-resistant S. Choleraesuis isolates (8,9). The emergence of fluoroquinolone resistance in S. Choleraesuis was mainly due to the dissemination of an endemic, resistant clone (2,9).

The emergence of fluoroquinolone resistance in this highly invasive nontyphoid Salmonella serotype represents a serious threat to public health and clinical medicine. Most of the ciprofloxacin-resistant S. Choleraesuis were also multidrug resistant to the conventional antimicrobial agents (1,2,6,10). This resistance indicates that extended-spectrum cephalosporins become the only reliable agent in the treatment of systemic infections caused by S. Choleraesuis. However, in 2002, we isolated for the first time from a patient with sepsis, a strain of S. Choleraesuis that was simultaneously resistant to ceftriaxone and ciprofloxacin (8). The ceftriaxone resistance gene, blaCMY-2, of this isolate was found on a potentially transmissible plasmid (8); thus, the spread of such resistance phenotype may be unavoidable in the future. In view of the severe situation, restricted use of antimicrobial agents in both humans and domestic animals as well as actively monitoring S. Choleraesuis isolates for antimicrobial drug resistance should be reinforced.

Page created: March 25, 2011
Page updated: March 25, 2011
Page reviewed: March 25, 2011
The conclusions, findings, and opinions expressed by authors contributing to this journal do not necessarily reflect the official position of the U.S. Department of Health and Human Services, the Public Health Service, the Centers for Disease Control and Prevention, or the authors' affiliated institutions. Use of trade names is for identification only and does not imply endorsement by any of the groups named above.