Bartonella quintana, transmitted by the human body louse (Pediculus humanis), is the etiologic agent for trench fever. Although Mooser experimentally infected a rhesus monkey with B. quintana >50 years ago, we report the first naturally occurring infection with B. quintana in a nonhuman primate (1). 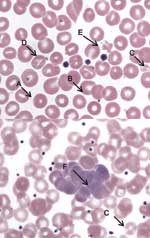 A young adult female cynomolgus monkey (Macaca fascicularis), born October 1, 1998, in a breeding facility in Vietnam, was shipped on February 28, 2001, to Covance Inc. (Alice, TX, USA), where she was quarantined and acclimated by the vendor. On April 30, 2001, the monkey was shipped to Laboratory Animal Services, Novartis Pharmaceuticals Corporation (East Hanover, NJ, USA) and held in quarantine until released on June 15, 2001, for study and assigned an identification number of 1505. Numerous procedures, treatments, and screening tests were conducted by the vendor during the monkey's quarantine in Texas and before its arrival in New Jersey. These included the following: 1) vaccination against hepatitis A (genus Hepatovirus) and measles (genus Morbillivirus); 2) serologic testing for cytomegalovirus (subfamily Betaherpesvirinae; positive), herpesvirus B (family Herpesviridae, negative), simian type D virus (simian retrovirus; SRV-1, -2, and -3; negative), simian immunodeficiency virus (SIV, genus Lentivirus; negative), simian T-lymphotropic virus (STLV, genus BLV-HTLV retroviruses; negative); 3) testing by polymerase chain reaction for SRV-1, -2, and -3 (negative); 4) Mantoux skin test for Mycobacterium tuberculosis (negative ×4); and 5) treatment for endoparasites with albendazole and avermectin, for ectoparasites with insecticide dust, and for Plasmodium spp. with chloroquine and primaquine. During the course of routine microscopic review of no. 1505's peripheral blood collected pretest (July 9, 2001) and stained with Wright stain (Hema-Tek 2000, Bayer Corporation, Wright Stain Pak, Curtin Matheson Scientific Inc., Houston, TX, USA; erythrocytic morphologic changes (moderate to marked stomatocytosis, punctate discoloration, or polychromatophilic aggregation) suggestive of a hemotropic parasite were observed (Figure 1). Malarial parasites were not observed. At the resolution of light microscopy (≈2 μ), basophilic particles were identified in association with erythrocyte membranes, with less well-defined, pale-blue inclusions seen within erythrocytes. Mean corpuscular volume was increased (82.2 fL). Blood from the same K-EDTA collection tube was transferred to the Electron Microscopy Laboratory (Novartis) for both transmission electron microscopy (TEM) and scanning electron microscopy (SEM) evaluation. Although intra- and extra-erythrocytic bacterial organisms were confirmed by TEM, and SEM identified numerous pits, the morphologic characteristics were not unique identifiers for Bartonella spp. (Figure 2). Since the sample was discarded after aliquots were taken for electron microscopy, a new K-EDTA blood sample was collected for culture from monkey no. 1505 and sent on ice by overnight delivery to the Intracellular Pathogens Laboratory, North Carolina State University College of Veterinary Medicine. Clinical observations during the study dosing period were unremarkable, and no unusual lesions were observed at necropsy or during histologic examination of selected tissues.

Five hundred microliters phosphate-buffered saline (PBS) was added to 200 μL blood (previously frozen at –80°C) and centrifuged at 20,817 × g for 6 min. The supernatant was removed, and the pellets were resuspended in 500 μL 1× PBS followed by centrifugation for 6 min. After removing the supernatant, and resuspending the samples in 200 μL PBS, we extracted DNA by using a QIAamp Blood Kit (Qiagen, Chatsworth, CA, USA) DNA from culture-grown B. henselae strain Houston-1, B. vinsonii subspecies berkhoffii (93CO-1), B. elizabethae, B. clarridgeiae (NCSU 94-F40), and B. quintana (ATCC VR-358) were used for all PCRs as control templates.

Amplification of the 16S rDNA and the 16S–23S intergenic spacer (ITS) regions was performed as described earlier (2,3). Amplification conditions for the citrate synthase gene (gltA) were the same as for the 16S–23S ITS region except that primers BhCS 1137n1 (5´ AATGCAAAAAGA ACAGTAAACA 3´) and CS443f 2 (5´ GCTATGTCTGCATTCTATCA 3´) were used (4). Selective PCR amplifications for the 16S rDNA, 23S rDNA, and rnpB were performed as described (2).

After cloning, recombinant plasmid DNA for gltA and the 16S–23S ITS region was sequenced bidirectionally with the infrared fluorescently labeled primers M13Reverse (5´ CAGGAAACAGCTATGACCATG) and T7 (5´ TAATACGACTCACTATAGGGCGA). The recombinant DNA carrying the genes for 23S rDNA, 16S rDNA, and rnpB was sequenced as described elsewhere (5). All sequences were aligned by using the multiple sequence alignment editor ALIGN-IR (LI-COR), and consensus sequences for every gene sequenced were determined. Consensus sequences were then used to identify the closest match within GenBank. To determine the exact phylogenetic relationship of the new isolate within the genus Bartonella, we analyzed an alignment that contained the sequences of 3 important phylogenetic markers, ribonuclease P RNA (RNase P RNA), 16S rDNA, and 23S rDNA, merged by catenation and organized by secondary structure elements, as described (5). Our dataset comprises 14 Bartonella strains (Table), including the 7 strains known to be human pathogens. We have also used the sequence information for the gltA as well as the 16S–23S rDNA ITS for sequence similarity analysis. Sequences have been deposited in GenBank with accession numbers AY484592 (16S rDNA), AY484593 (23S rDNA), AY484594 (RNase P RNA), and AY484595 (gltA).

On day 14 after blood plating, growth typical for members of the genus Bartonella was obtained. Sixty-two small to medium-sized, white, shiny, smooth, nonadherent colonies were detected on chocolate agar. By day 16 after plating, 43 colonies of similar appearance were evident on blood agar. The strain was designated Bartonella strain CMO-01-1.

DNA could be successfully extracted, and subsequent PCR reactions resulted in PCR products representing 23S rRNA, 16S rRNA, RNase P RNA, 16S-23S rDNA ITS sequence, and the citrate synthase gene. All products were successfully cloned and sequenced. Sequencing of multiple clones for each gene resulted in sequences that were >99% identical to existing sequences derived from B. quintana, with the exception of the 16S–23S rDNA ITS sequence (>98.4%) and gltA (98%). Initial BLAST search results showed that the sequences for the 23S rDNA, the 16S rDNA, RNase P RNA, 16S–23S rDNA ITS sequence, and gltA derived from strain CMO-01-1 best matched B. quintana sequences that have been reported to GenBank. The data could be reproduced by using DNA extracted from the K-EDTA blood sample or from pure colonies grown on both chocolate and blood agar.

Figure 3. Phylogenetic tree of Bartonella species (Table) based on the combined RNase P RNA, 16S, and 23S rRNA sequence alignment. Agrobacterium tumefaciens serves as the outgroup in this tree. The...

Subsequent comprehensive phylogenetic analysis clearly identified the isolate CMO-01-1 as a close relative of B. quintana type strain "Fuller." The statistical support for this relationship is 100%, as indicated by the bootstrap values for the phylogenetic tree (Figure 3).

Our findings support the close relationship of B. quintana and the new cynomolgus monkey isolate. The evolutionary distance (Figure 3) between B. quintana and the new isolate is similar to the evolutionary distance between the 3 subspecies of B. vinsonii. The high degree of sequence identity for the 16S rDNA of our isolate to other B. quintana 16S rDNA sequences deposited in GenBank clearly identifies strain CMO-01-1 as B. quintana. However, the high degree of 16S rDNA sequence identity makes a discriminatory match within or below the species level impossible. We have therefore applied the combined use of the phylogenetic markers RNase P RNA, 16S rRNA, and 23S rRNA for a comprehensive phylogenetic analysis. The advantage of such an analysis within the genus Bartonella has been discussed by Pitulle et al. (2). We have used the same dataset (Table) as described earlier (2) but added the sequences derived from the isolate CMO-01-1. We therefore consider the new isolate a novel strain of B. quintana.

The gltA sequence derived from the bacterial strain CMO-01-1 is 98% identical to that derived from B. quintana. This match was the highest within the genus Bartonella. The next closest match was B. henselae with 92% similarity. This degree of sequence identity also suggests that CMO-01-1 represents a strain of B. quintana.

Confinement practices used for monkey 1505 should have eliminated or substantially restricted possible exposure to insect vectors, such as the human body louse (Pediculus humanis). Neither an exposure date nor an arthropod vector was identified in this monkey. Chronic subclinical infection with B. quintana as has been documented following experimental infection of monkeys (1) and in humans for B. quintana (5,6) and B. bacilliformis (7). Persistent infection was suspected but was not documented in this monkey because of the delay in bacterial identification. Bred and raised in outdoor facilities located in Southeast Asia, these primates often arrive in the United States with subclinical malaria, proof that exposure to mosquitoes and potentially other insects has occurred. B. quintana DNA has been recently found in ticks and fleas (8,9).

The reemergence of B. quintana infections in humans has expanded awareness of the organism's ability to induce persistent bacteremia in people with few symptoms (5,6,10,11). Because of the small number of infected erythrocytes needed to sustain infection, screening peripheral blood for organisms, even with confocal microscopy, has a poor success rate (12). Our findings indicate that nonhuman primates may serve as a previously unrecognized reservoir for human B. quintana infection.