Detection of genogroup II (GII) norovirus (NoV) RNA from adult pigs in Japan and Europe and GII NoV antibodies in US swine raises public health concerns about zoonotic transmission of porcine NoVs to humans, although no NoVs have been detected in US swine. To detect porcine NoVs and to investigate their genetic diversity and relatedness to human NoVs, 275 fecal samples from normal US adult swine were screened by reverse transcription–polymerase chain reaction with calicivirus universal primers. Six samples were positive for NoV. Based on sequence analysis of 3 kb on the 3´ end of 5 porcine NoVs, 3 genotypes in GII and a potential recombinant were identified. One genotype of porcine NoVs was genetically and antigenically related to human NoVs and replicated in gnotobiotic pigs. These results raise concerns of whether subclinically infected adult swine may be reservoirs of new human NoVs or if porcine/human GII recombinants could emerge.

Norovirus RNA was detected by reverse transcription–polymerase chain reaction (RT-PCR) in 4 of 1,017 normal slaughtered pigs in Japan (9) and in 2 of 100 pooled pig fecal samples in the Netherlands (10). These porcine NoVs (Sw43/97/JP, Sw918/97/JP, and 34/98/NET) are genetically similar and are classified into GII (9,10), like most epidemic human NoVs (11–13). Also, the viruslike particles (VLPs) of Sw918 strain cross-react with antibodies against human GII but not GI NoVs (14). The close genetic and antigenic relationships between human and porcine NoVs raise public health concerns regarding their potential for zoonotic transmission and as reservoirs for emergence of new epidemic human strains.

Farkas et al. (14) reported that US swine sera react with Po/NoV/GII/Sw918 strain, but no direct detection of NoV from US swine has been reported. To detect porcine NoVs and assess their genetic diversity and relatedness to human NoVs, we screened 275 pig fecal samples from US swine by RT-PCR with a calicivirus universal primer pair p290/110 targeting the RdRp region (15,16), followed by sequencing the 3 kb on the 3´ end of the genome for 5 NoV strains. Gnotobiotic pigs were inoculated with porcine NoVs to examine their infectivity and to produce convalescent-phase antiserum for antigenic analysis.

Four gnotobiotic pigs were maintained and euthanized as previously described (25,26). The inoculate was a 20% fecal filtrate (0.2 μm) in EMEM of the QW126 or QW144 (QW101-like, GII-18) strains or EMEM only (2 negative control pigs). One pig was inoculated with QW126 orally and intranasally at 9 days of age, and convalescent-phase antiserum LL616 was collected at postinoculation day (PID) 26. A second pig was inoculated with QW144 orally at 35 days of age and euthanized at PID 5.

Porcine NoVs were classified into 3 genotypes within GII based on the complete capsid sequences: 1 genotype with prototype Japanese strains Sw43 and Sw918 and 2 new genotypes. A total of 19 of 275 samples showed a potential positive band after agarose gel electrophoresis of the RT-PCR products of primer pair p290/110. Fourteen samples representative of each potentially positive farm or the slaughterhouse were sequenced. After performing BLAST search, we identified 6 NoVs (QW48, Michigan farm A; QW101, QW125, and QW126, Ohio farm B; and QW170 and QW218, Ohio slaughterhouse), 3 sapoviruses, and 5 sequences that had no significant hit in the database. Because the QW126 shared 99% nucleotide (nt) identity with the QW101 and QW125 strains in the 274-nt RdRp region, it was not sequenced further.

The amino acid identity of the predicted complete and S and P domains of the capsid protein of the 5 porcine NoVs, the previously reported porcine NoVs (Sw43 and Sw918), and representative human, bovine, and murine NoV strains is summarized in Table 3. In the complete capsid, the QW48 strain was most closely related to the porcine NoV prototype Sw43 strain (98% amino acid identity); the QW170 and QW218 strains shared the highest amino acid identities (81%) to porcine Sw43 and Sw918 strains; the QW101 and QW125 strains showed the highest amino acid identity to human GII-3/Mexico (71.4%), then to human GII-6/Baltimore (71.0%), porcine QW218 (71.0%), and porcine Sw43 (70.6%) strains. The S and P domains of these NoVs showed similar relationships. A neighbor-joining phylogenetic tree based on the amino acid sequences of the complete capsids (Figure 1) showed that QW48 grouped with Sw43 and Sw918 strains into GII-11 and that QW170 and QW218 formed a new genotype (GII-19), which was closer to porcine than to human strains. However, QW101 and 125 formed a new genotype (GII-18) between human and porcine GII NoVs.

Further analysis of the predicted C-terminal ≈260 amino acids of the RdRp region (Figure 2) showed similar grouping results for QW48, QW101, and QW125 strains but different for QW170 and QW218 strains, which were in the same cluster (GII-11) as Sw43, Sw918, and QW48 in the RdRp region. This finding suggested that a recombination event occurred between QW170/218-like and Sw43-like NoVs. The complete VP2 sequences of representative strains were also analyzed (data not shown). Results were similar to those of the capsid sequence classification.

Figure 3. Identification of a potential recombination event between QW170 and Sw43 strains. A) Recombination Identification Program analysis of QW170 strain. At each position of the window, the query sequence (QW170) was compared...

A potential recombination event occurred between QW170/218-like and Sw43-like strains. To examine where the recombination occurred, we performed RIP analysis by placing the 3´-end RdRp and the capsid sequence of QW170 or QW218 as a query sequence and the corresponding sequences of Sw43 and QW101 as background sequences. The resulting diagram (Figure 3A) showed that QW170 had high similarity to Sw43 in the RdRp but not in the capsid region. This abrupt change happened in the RdRp-capsid junction region. Therefore, we performed sequence alignments of the RdRp-capsid junction of NoVs, including the calicivirus genomic-subgenomic conserved 18-nt motif (20) (Figure 3B). Between Sw43, QW170, and QW218, all 18 nt were identical, but identities decreased downstream of this motif. QW170 and QW218 grouped with Sw43 with a high bootstrap value of 95 in the RdRp tree (Figure 2), whereas they segregated from Sw43 with the highest bootstrap value of 100 in the capsid tree (Figure 1). We could not clarify which was the parent or progeny strain. 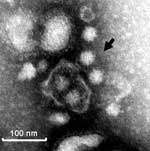 The porcine NoVs replicated in gnotobiotic pigs. Two pigs were inoculated with QW101-like GII-18 porcine NoVs (QW126 and QW144 strains) to verify their replication in pigs as confirmed by quantitative RT-PCR and IEM and to produce convalescent-phase serum to examine antigenic reactivity with human NoVs. These 2 strains were confirmed as QW101-like porcine NoVs in both the RdRp (169-nt) and the capsid S domain (363-nt) regions by sequence analysis of the RT-PCR products (Q.H. Wang and L.J. Saif, unpub. data). They shared 99% and 100% amino acid identities to the QW101 strain in the 2 regions, respectively. Porcine NoV shedding, assessed by quantitative RT-PCR with primer pair PNV7/8, was detected at PID 3–5 (euthanized) after QW144 exposure, coincident with mild diarrhea. The RT-PCR–detectable units of the rectal swab RNA increased from negative at PID <2, 103 at PID 3–4, and 104 at PID 5 (large intestinal contents). Norovirus shedding was detected only at PID 5 without diarrhea after QW126 exposure. Examination of the intestinal contents of the pig inoculated with QW144 by IEM with pig convalescent-phase antiserum LL616 showed clumps of ≈32-nm NoV particles (Figure 4). The 2 control pigs had no virus shedding or diarrhea. Detailed studies of the pathogenesis of porcine NoVs in gnotobiotic pigs are in progress (S. Cheetham and L.J. Saif, unpub. data).

All porcine NoVs were detected from pigs without clinical signs (9,10). Subclinically infected pigs may be natural reservoirs for NoVs, and because porcine GII NoVs are genetically and antigenically related to human NoVs, concerns exist about their zoonotic potential. Whether human NoV strains similar to the QW101-like porcine NoVs circulate among people with occupational exposure to pigs is unknown, but such studies could provide information on the zoonotic potential of these porcine NoVs.

The RdRp-capsid junction region of NoVs contains a highly conserved 18-nt motif in genomic and subgenomic RNA that is believed to be a transcription start signal (1,20). All 18 nt were identical within each genogroup except for the Hu/GII/J23, Po/GII/QW101, and Po/GII/QW125 strains (Figure 3B, sequence alignments on other GI and GIII strains are not shown). This finding suggests that homologous recombination may occur within this motif between NoVs of different genotypes within the same genogroup. Recombinant human GII NoVs have been reported previously (20–24). To our knowledge, this study is the first identification of a potential recombinant between pig NoVs. At present, NoV recombinants have been detected exclusively between viruses within the same genogroup and within the same host species, but few animal NoVs have been sequenced (RdRp and capsid) for comparative analysis, especially those from animals in developing countries, where humans and animals may be in close contact.

The QW101-like porcine NoVs replicated in gnotobiotic pigs with fecal shedding, documented by quantitative RT-PCR and IEM. No cell culture system or animal disease models are available for human NoVs, which impedes the study of their pathogenesis, replication strategies, host immune responses, and preventive approaches. The infection of pigs with porcine NoVs may provide a new infection or disease model to study NoV infections.

In this study, 1-way antigenic cross-reactivity occurred between antiserum to QW101-like porcine NoVs and the capsid proteins of human NoVs, with highest cross-reactivity to GII-3, 4, and 6 NoVs. This finding coincides with the finding that the QW101 strain shares high amino acid identity with GII-3 (71%), GII-6 (71%), and GII-4 (63%) NoVs.

In summary, 3 genotypes of porcine NoVs were detected in US swine. One genotype (QW101-like, GII-18) was genetically and antigenically most closely related to human GII NoVs. Potential recombinant porcine NoV strains were identified. The QW101-like NoVs infected gnotobiotic pigs, and NoV particles were evident in intestinal contents. These results raise questions of whether pigs may be reservoirs for emergence of new human NoVs or if porcine/human GII recombinants could emerge.

We thank Kim Green and Steve Monroe for providing human NoV VLPs for ELISA, except for VLPs of GII-4/HS66/01/US, and Duping Zheng for assistance in recombination analysis.