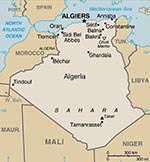 Either Castaneda Aer/Anaer (Bio-Rad, Marnes-La-Coquette, France) or broth for blood culture (Institut Pasteur d’Algérie, Algiers, Algeria) were used as blood-culture medium and were incubated at 37°C. If signs of culture appeared, a blood sample was taken from the culture bottle and Gram staining on Columbia blood agar (BioMérieux, Marcy L’Etoile, France) and chocolate agar (BioMérieux) was performed. Agar plates were incubated in 5% CO2 at 37°C. In the event of culture, the microorganism was identified by API identification tests (BioMérieux). At day 15 of incubation, if cultures remained negative, an enrichment of each bottle was processed on Todd-Hewitt broth (Institut Pasteur d’Algérie) supplemented with 0.01% L-cysteine (Sigma-Aldrich, Lausanne, Switzerland) and 0.001% hypochloride pyridoxal (Sigma-Aldrich). In cases of broth turbidity, microscopic examinations were performed as described above. If culture was positive, the strain was identified.

Thirty-eight excised cardiac valves were examined. If macroscopic lesions of infective endocarditis were detected, we attempted to divide the valve into 3 parts to be used for bacteriologic analysis, storage at –80°C, and histologic analysis. Portions of valve tissue were ground with a mortar and pestle and cultured on Columbia blood agar and chocolate agar supplemented with Polyvitaminic Supplement (Bio-Rad) at 35°C for 15 days in 5% CO2. We performed direct Gram staining and identified colonies as described above.

Cell cultures were performed in France. Specimens from 12 cardiac valves positive on polymerase chain reaction (PCR) for Bartonella quintana or Brucella melitensis were spread onto cells grown within a shell vial as previously described (13,14). After 3 weeks of incubation at 37°C, the bacteria were detected by using Gimenez staining, a direct immunofluorescence test incorporating polyclonal antibodies directed against Bartonella, and by PCR targeting the 16S rRNA sequence.

For the 38 cardiac samples stored at –80°C, molecular analysis was performed in France. After 18 hours of proteinase K digestion at 55°C, DNA was extracted from tissue by using the MagNA Pure LC instrument (Roche Molecular Biochemicals, Manheim, Germany) and MagNA Pure LC DNA Isolation Kit III (Roche Molecular Biochemicals), as described by the manufacturer. A PCR-positive valve sample taken from a patient with Staphylococcus aureus endocarditis was used as a positive control. A mixture of all reagents used for DNA extraction and DNA extracted from normal heart tissue were processed as negative controls. One negative control was included for every 5 samples tested. PCR amplification and sequencing were performed, as previously described (15), by using primers in Table 1. PCR targeting the 16S rRNA sequence was systematically performed. When a negative result occurred, additional PCR was performed targeting the 18S and 28S rRNA internal transcribed spacer to search for fungal infections. All positive PCR products were sequenced. The sequences were compared to those available in GenBank. Positive PCR results were considered as certain, when congruence existed between the results obtained with PCR and those obtained with other analyses. With a positive result interpreted as a possible case, we performed additional PCR, targeting a second gene with genus-specific primers (Table 1). When the PCR was positive and the sequence gave the same result, the case was reclassified as certain. When the second PCR was negative, we performed a PCR targeting a third gene. When both PCRs targeting the second and the third gene were negative, the result was classified as negative.

Figure 2. Western blot performed with a serum sample from a patient with an endocarditis caused by Bartonella quintana. Molecular masses (in kilodaltons) are given to the left of the panels. A) Untreated...

Figure 3. A) Section of an aortic valve from a patient with Bartonella endocarditis. Note the extensive fibrosis of the connective valve tissue (arrowhead), the vegetation (*), and the low inflammatory infiltrate of...

Axenic culture of cardiac valves was positive for 9 samples. The growth of 2 coagulase-negative Staphylococcus, 2 Streptococcus sp., 1 Staphylococcus aureus, 1 Streptococcus mitis, 1 S. intermedius, 1 Corynebacterium sp., and 1 Candida kruzei was observed. Another sample was polymicrobial. Cell culture allowed the growth of B. quintana, an arthropodborne disease agent, from 3 valve samples (Tables 2 and 3). The numbers of valve specimens classified into groups A, B, and C were 21, 5, and 11, respectively. With the exception of Bartonella endocarditis, the samples with histologic features of infective endocarditis had vegetations in most cases, moderate fibrosis, calcifications in some cases, and numerous inflammatory infiltrates composed predominantly of polymorphonuclear leukocytes and abundant neovascularization. By using special stains, microorganisms were visualized in 16 samples from group A, gram-positive cocci and gram-negative bacilli in 8 cases each. In samples from group B, the inflammatory infiltrates were rare and focal and consisted mainly of macrophages and lymphocytes with discrete neovascularization. The specimens from group C showed noninflammatory degenerative damage with extensive fibrosis and often calcifications. The histologic features of Bartonella endocarditis were different from the other infective endocarditis. Samples from 7 cases with Bartonella endocarditis were examined. The valve tissues showed degenerative damage with extensive fibrosis. The valve tissues were poorly inflamed with rare mononuclear inflammatory cell infiltrates composed of lymphocytes and macrophages and discrete neovascularization. Vegetations, present in all samples, were small in size. In all cases, the Warthin-Starry stain detected Bartonella, mainly in vegetations as small bacillary organisms (Figure 3).

The 16S rRNA PCR was positive for 29 cardiac valves (Tables 2 and 4). B. quintana was detected on 10 specimens (Table 3). Among the Streptococcus sp. and related genera, 3 Streptococcus spp., 1 S. mitis, 1 S. mutans, 1 S. gordonii, 1 S. pneumoniae, and 1 Granulicatella adiacens were detected. Two Styphlococcus aureus and 1 coagulase-negative Staphylococcus were identified. Among the 2 bacteria from the HACEK group, 1 H. paraphrophilus and 1 Cardiobacterium hominis were identified. PCR performed with a second gene confirmed the previous PCR results with 1 exception. One Streptococcus sp. was not retrieved by PCR targeting a second or third gene and was considered as contamination. The PCR targeting the 18S–28S rRNA ITS allowed the detection of 1 Candida parapsilosis. Finally, Bartonella spp. were also specifically visualized in vegetations by immunohistochemistry in all the cases of B. quintana endocarditis (Figure 3).

The overall distribution of causative microorganisms and their identification, depending on the diagnostic tools used, are displayed in Table 2. An etiologic agent could not be determined for 10 (13%) of definite cases and 28 (76%) of possible cases. For the 2 patients with recurring infective endocarditis, the cause for the first episode was different than that of the second episode. One patient had endocarditis caused by Streptococcus oralis, and 1 year later, endocarditis caused by K. kingae developed. For the other patient, no etiologic diagnosis was established for the first episode, during which a valve removal was necessary. Four months after cardiac surgery, the patient had endocarditis caused by Staphylococcus epidermidis. Nine discrepant results were also observed and are summarized in Table 4.

Endocarditis cases with fastidious agents escape microbiologic diagnosis classically applied in Algerian laboratories. For the first time, we established a profile of the microbiologic etiology of infective endocarditis in Algeria. Our conclusions concerning PCR results were submitted to a rigorous strategy of validation. All of the controls must be correct for validating each assay. The result was considered true if confirmation was obtained by successfully amplifying bacterial DNA when targeting another gene, the PCR result was congruent with the results of other diagnostic tools, or both.

Of the 77 cases of definite infective endocarditis, the cause was found for 67 (87%) cases. The diagnosis was performed on the basis of positive blood cultures for 44 cases. For 20 (26%) cases, no etiologic diagnosis was obtained in Algeria but was performed in France on the basis of cardiac valve PCR, and Bartonella and Coxiella burnetii serologic testing. These data show improvement in the etiologic diagnosis of endocarditis when molecular or serologic tools are used. The rate of remaining infective endocarditis without cause is comparable to the prevalence in western countries (16). As in other countries, the etiologic distribution is dominated by the bacteria responsible for infective endocarditis, such as Streptococcus spp. and related genera, Staphylococcus spp., and bacteria from the HACEK group. The difference in comparison to other countries is that blood culture–negative endocarditis is mainly linked to zoonotic and arthropodborne agents.

Of the 62 blood culture–negative endocarditis cases, samples from all were tested by serologic or molecular methods. Of these, 34 were negative, and 28 had an etiologic agent identified. Seventeen of those were due to zoonoses or arthropodborne bacterial diseases.

Discrepancies were observed between the results obtained by using the various techniques. Some discrepancies resulted from culture contamination with the cutaneous flora. A significant rate of contamination has been already reported, and the low specificity of valve culture that we observed confirms these results (23–25). One discrepancy was caused by identification problems at the species level for Streptococcus. This fact has been previously reported (7). Another discrepancy was linked to a Candida species misidentification by phenotypic analysis, which was corrected by using molecular tools. The last discordant case corresponded to a patient for whom blood cultures were positive for H. influenzae. When serum samples were analyzed, a diagnosis of B. quintana endocarditis has been established in the presence of positive Bartonella MIF, Western blot, and PCR. We do not know if B. quintana was misidentified as H. influenzae, which is possible as both are slow-growing, hemin-dependent, small, gram-negative bacteria (26). We believe that as fastidious, small, gram-negative bacteria growing in blood agar, the 2 organisms may be confused.

Homeless people are at risk for B. quintana endocarditis (30,31). Indeed, B. quintana, like Rickettsia prowazekii, the agent of epidemic typhus, is transmitted by body lice. Those who live in extreme poverty are often the persons who are infested. The recent description of typhus in Algeria confirms that poor socioeconomic conditions still exist in this country (32–34). In our studies, B. quintana endocarditis cases occurred in patients living in poor conditions. Although the only known reservoir for B. quintana is humans, the bacterium has recently been associated with fleas (35). Moreover, some cases of B. quintana infections have been linked to contact with cats and cat fleas in patients who were not homeless and did not have body lice (36).

Brucella melitensis, well known in northern Africa, where bucellosis is endemic in certain areas, accounts for 2.6% of all infective endocarditis cases for which an etiologic diagnosis has been performed (37). Be cause C. burnetii detection requires specialized tests not normally found in most laboratories, it is not often diagnosed in Algeria (38). Two cases were retrospectively detected.

Importance of infective endocarditis caused by zoonotic and arthropodborne agents in Algeria leads to 2 considerations. First, specific serologic tests need to be used for diagnosis. Indeed, 25% of our etiologic diagnoses correspond to microorganisms for which the diagnosis is usually based on serologic testing. Secondly, the therapeutic impact of Brucella and Coxiella diagnosis is important because the antimicrobial treatment of endocarditis caused by these agents must include doxycycline. The 2 patients with Q fever endocarditis died during their hospitalization because of inadequate antimicrobial therapy. Finally, the high rate of blood culture–negative endocarditis was not linked to prior antimicrobial therapy but rather to fastidious microorganisms for which serologic testing (as for zoonotic and arthropodborne disease agents) or molecular analysis (as for Mycoplasma hominis [39] and Corynebacterium spp.) are diagnostic tools.

Dr. Benslimani is a physician working at the E.H.S. Dr Maouche, Algiers, Algeria. Her research interests include the clinical features and diagnosis of endocarditis.

We thank Kelly Johnston for reviewing the manuscript.

1These 2 authors have contributed equally to the manuscript.