Figure 1. . Location of Hiroshima prefecture in Japan and the areas where patients 1–4 resided. Numbers 1–4 correspond to the patients' numbers.

CSF specimens were obtained for diagnostic purposes from 170 patients with a clinical diagnosis of aseptic meningitis from August to October in each year from 1999 to 2002, in Hiroshima prefecture. These CSF specimens were sent to the Division of Microbiology II, Hiroshima Prefectural Institute of Health and Environment, for virologic examination. Viruses were isolated from 112 of 170 CSF specimens in cell cultures by using Vero cells, BGM cells, FL cells, Hep2 cells, and RD18S cells. Enteroviruses and mumps viruses were isolated from 96 and 16 CSF specimens, respectively (Table A1). Thus, etiologic agents were not determined for 58 meningitis cases. CSF specimens from 57 of these 58 cases were used to detect Japanese encephalitis virus genome. Whether the 57 patients had been vaccinated for Japanese encephalitis virus was not known. 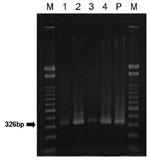 Patients 1–4 lived in Hiroshima prefecture (Figure 1). Patient 1 was a 3-year-old boy and patient 4 was a 6-year-old girl (Table 2). They became sick in early August 2000. Patient 2 was a 2-year-old girl who became sick in late August 2000. Patient 3 was a 4-year-old boy who got sick in mid-September 2000. CSF samples were obtained 2–3 days after the onset of illness. All 4 patients had symptoms characteristic of meningitis and were clinically diagnosed with meningitis.

Dr. Kuwayama is an infectious disease specialist and virologist. He is a vice-chief researcher at Division of Microbiology II, Hiroshima Prefectural Institute of Health and Environment, Hiroshima City, Hiroshima Prefecture, Japan. His research interests include emerging and reemerging viral infections, viral epidemiology, and zoonoses.

We thank physicians and pediatricians in the hospitals and clinics in Hiroshima prefecture for providing us with CSF samples.

This study was in part supported by the grant for the Research on Emerging and Re-emerging Infections Diseases from the ministry of Health, Labour and Welfare of Japan.

Page created: April 25, 2012
Page updated: April 25, 2012
Page reviewed: April 25, 2012
The conclusions, findings, and opinions expressed by authors contributing to this journal do not necessarily reflect the official position of the U.S. Department of Health and Human Services, the Public Health Service, the Centers for Disease Control and Prevention, or the authors' affiliated institutions. Use of trade names is for identification only and does not imply endorsement by any of the groups named above.