We describe the spread of a dengue virus during an outbreak in Saint Martin island (French West Indies) during winter 2003–2004. Dengue type 3 viruses were isolated from 6 patients exhibiting clinical symptoms. This serotype had not been detected on the island during the preceding 3 years. Genome sequence determinations and analyses showed a common origin with dengue type 3 viruses isolated in Martinique 2 years earlier.

Dengue virus (DENV) infection is recognized as a major public health problem; >50 million persons are infected each year worldwide (1), and the incidence of severe, sometimes lethal, forms of the disease is increasing (2). Dengue viruses are mosquitoborne flaviviruses with a single-stranded, nonsegmented, positive-sense RNA genome ≈11 kb in length. Four antigenically distinct serotypes, DENV types 1 to 4, exist (3). Infection with any serotype can lead to disease, ranging from mild infection, dengue fever (a generally mild disease with complete recovery), to severe forms (dengue hemorrhagic fever and dengue shock syndrome). Molecular epidemiologic studies have investigated the possibility of a link between particular DENV genotypes or clusters and particular clinical forms of disease (4,5). Consequently, finding new viral genotypes in areas where they had been absent could be of epidemiologic and clinical interest. A recent work described the emergence and the global spread of DENV-3 subtype III (5). Originating from the Sri Lankan/Indian subcontinent, the new variant likely spread to eastern Africa in the 1980s, then to Latin America in the mid-1990s (5). Previous work in our laboratory identified a DENV-3 subtype 3 of the same origin in Martinique in 1999 (6). 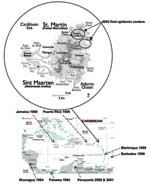 Figure 1. . Map of Saint Martin, an island in the Caribbean. The lower map represents the Caribbean subregion. The year of dengue virus type 3 subtype III detection is indicated under the...

Whereas other Caribbean islands had annual dengue epidemics, the last outbreak reported in Saint Martin (French West Indies) (Figure 1) was in 1977 (7). Only DENV-1 was isolated during this epidemic, while DENV-1, DENV-2, and DENV-3 circulated in Puerto Rico at the same time (8). In 2000, during an interepidemic period, 1 isolate of DENV-3 was reported in Saint Martin (http://www.carec.org/annrep00/index.html), but to our knowledge its sequence was not determined. During the last 3 years, no further DENV isolates have been reported on the island. However, in December 2003, an outbreak of febrile illness was reported after heavy rains. An estimated 108 persons were infected, and DENV was suspected to be the causative agent by Saint Martin Lepers Laboratory (9). During this period, blood samples collected at early and late stages of infections were examined at the Tropical Medicine Institute of the French Armed Forces Medical Service (Institut de Médecine Tropicale du Service de Santé des Armées [IMTSSA]) tropical virology laboratory in Marseille to identify the etiologic agent. DENV-3 was isolated on C6/36 cells (Aedes albopictus). Partial genomic sequences were determined for each isolated virus to evaluate the origin and diversity of its spread. This approach should help clarify the geographic distribution of isolates in the Caribbean islands as well as the virus' circulation in and transmission to humans.

In December 2003, an outbreak of febrile illness was reported (9) after heavy rainfalls in Saint Martin (29,000 inhabitants in the French part and 36,000 in the Dutch part). The outbreak seemed to start first in the northeastern part of the island ("Baie orientale" and "Cul de sac" neighborhoods), then spread through the island (Figure 1). The temporal distribution of the outbreak is shown in Figure 2 (10). We used a commercial enzyme-linked immunosorbent assay (ELISA) (Eurobio, Courtaboeuf, France) in Saint Martin Lepers Laboratory to determine that, from October 2003 to April 2004, a total of 108 persons were infected; a DENV was suspected as the etiologic agent (10). Twelve persons manifesting thrombocytopenia without hemorrhagic signs were hospitalized (9).

Collection and Transport of Samples

Sera from 26 patients with dengue-like syndromes were collected at a local laboratory and transported (by air, at 4°C) to the IMTSSA laboratory in Marseille for serologic diagnosis and etiologic agent identification. All these samples were collected from December 2003 to January 2004, the peak of the outbreak.

Work with the infectious virus was carried out in a biosafety level 3 laboratory. Virus isolation was attempted when the first sample could be collected <5 days after onset of illness and when enough serum was collected for serologic analysis (12). DENV-3 strains (Table A1) were all isolated from leukocytes of patients. Leukocytes of the samples were directly coincubated with C6/36 cells (Ae. albopictus) grown at 28°C in Leibowitz's L15 medium (BioWhittaker Europe, Verniers, Belgium) supplemented with 1% L-glutamine and 2% tryptose phosphate broth. Fetal bovine serum (5% final) was added 1 h later. Supernatants were collected on day 5 after infection.

Indirect immunofluorescence (IF) was performed on C6/36 cells with DENV-1, -2, -3, and -4 serotype–specific monoclonal antibodies (kindly provided by Nick Karabatsos, Centers for Disease Control and Prevention, Fort Collins, Colorado); on mouse hyperimmune ascitic fluids for West Nile virus and Bunyamwera virus; and on grouping fluids for alphaviruses, phleboviruses, and California serogroup viruses. After isolation attempts, remaining sera were used for serologic studies but not for DENV-3–specific reverse transcription–polymerase chain reaction (RT-PCR) because too little serum was available after serologic tests.

PCR products were purified from 1.5 % agarose gels, by using the QIAquick gel extraction kit (Qiagen, Courtaboeuf, France) and directly sequenced with the direct and reverse primers (Table) and the Big Dye Sequencing kit (Applera). Sequencing was carried out with an automatic sequence analyzer (ABI PRISM 3100, Applera) following the manufacturer's protocol.

Sequences of the Saint Martin DENV isolates were compared to GenBank database DENV sequences (Table A1). Alignments of nucleotide and amino acid sequences of the prM/M and partial E nucleotide sequences (nucleotide numbers 437–1144 by reference to the sequence of the D3H87 strain) were performed with ClustalW1.7 software (14). Phylograms were constructed with the MEGA 2 program (15), and tree drawing used the Jukes-Cantor algorithm for genetic distance determination and the Neighbor Joining method. The robustness of the resulting tree was tested by 1,000 bootstrap replications.

From October 2003 to April 2004, DENV-3 circulated on the island, and 108 cases of dengue fever were serologically or virologically confirmed in both the Lepers Laboratory and the IMTSSA laboratory, and 12 persons were hospitalized (10). If one takes into account the 180 suspected cases observed during this period, the incidence of dengue fever during the epidemic was ≈0.62% (180/29,000) on the French part of the island; this value was consistent with values already observed in the Caribbean region (http://www.carec.org/data/dengue/1998/table2.html). No data were available from the Dutch half.

During this period, an additional 26 blood samples from patients with dengue-like syndromes at early stage of the infection were received in IMTSSA Tropical Virology Laboratory in Marseille. Among them, 13 were positive for dengue infection by presence of IgM, elevation (4-fold) of specific IgG, or both. Virus was isolated from 6 other patients, and DENV-3 was identified by IF using serotype-specific monoclonal antibodies. No fluorescence was observed when DENV-1, DENV-2, or DENV-4 monoclonal antibodies were used. Moreover, IF tests were negative when antibody to West Nile virus, Toscana virus, Bunyamwera virus, alphaviruses, phleboviruses and California serogroup viruses was used. These cases were considered confirmed dengue fever; all the patients recovered fully.

DENV-3 was genetically identified in the 6 IF positive isolates (D3StMart1–D3StMart6, referred to as GenBank accession no. AY750713–AY750718) by using BLAST-NCBI software. Comparison of partial sequences showed a high degree of identity between the strains isolated from patients on Saint Martin: paired identity at the nucleotide level ranged from 99.3% to 100%. When compared to 00PuertoR1 strain of the Latin American cluster defined by Messer (5), the values were 99.5%–99.6%. Nucleotide comparison gave the following values: 98.3%–98.4% for East African cluster (5), 98.8%–98.9% for Group B (5), and 96.8%–96.9% for Group A (5). This comparison indicated a close relationship between Saint Martin and Latin American isolates.

The strains from Saint Martin shared an 11-nucleotide insertion between position 10,275 and position 10,276 in the 3´UTR (AGTGAAAAAGA). The same insertion was found in isolates from Martinique 2 years earlier (6) and from DENV-3 Sri Lanka (6), indicating a probable common ancestor. This finding was consistent with a Sri Lankan origin for DENV-3 subtype III circulating in the Latin American and Caribbean regions (5) and with extension of the virus from a single importation event.

A phylogenetic tree was constructed based on partial sequences of the prM/M-E gene region (position 437–1144) of the genomes, including the strains from Saint Martin and several other previously characterized strains from different origins (16–19). DENV isolated from Saint Martin was grouped in subtype III, as defined by Lanciotti (17) (data not shown). Another phylogenetic tree was constructed with the strains analyzed by Messer (5) (Figure 3). Despite the high overall similarity of the subtype III sequences, distinct groups could be distinguished. The 6 isolates from Saint Martin clustered together. The small lineage difference of D3StMart2 is supported by a 95-bootstrap value, but no evidence suggests that such difference implies multiple introductions or a longer transmission period. However, Saint Martin DENV-3 fell in the Latin American cluster defined by Messer (5), which also includes isolates from Guatemala, Nicaragua, and Mexico. Isolates from Saint Martin were particularly close to Martinique isolates (6) and the 00PuertoR1 isolate, which were the geographically and temporally closest isolates of the cluster. The analysis of the deduced amino acid sequences generated a similar phylogram. Altogether, these results indicate that the Saint Martin viral isolate belongs to the genotype Puerto Rico 2000 previously reported (5). These results also confirm a common origin for all DENV-3 circulating in the Caribbean and Latin American region; their ancestor probably originated from Sri Lanka. Additional American DENV-3 strain sequences, encompassing the insertion site, should help to confirm this hypothesis.

The question arose whether the introduction from Sri Lanka was a single event in the Latin American region, first appearing in Panama (5), then spreading through the Caribbean subregion and South America. In fact, viruses belonging to subtype III were first reported in Nicaragua and Panama in 1994 (20). They were then identified in Guatemala from 1996 to 1998; in Puerto Rico, Barbados, and Jamaica in 1998 (18); and in Martinique in 1999 (6). The introduction of DENV-3 in Saint Martin was reported in 2000 (http://www.carec.org/annrep00/index.html), but the subtype was not determined. No virus isolation was reported for 3 years, until the viruses we characterized were isolated. The rapid extension of DENV-3 belonging to subtype III, which have almost completely replaced preexisting DENV of serotype 1 and 2, is indicative that these particular viruses have adapted to Caribbean and Latin American conditions. Together with previous studies (5,6), identification of viruses belonging to subtype III in another area of the Caribbean region confirms the remarkable epidemiologic success of this particular lineage of dengue viruses.

Comparable substitution of local DENV by a new genotype was previously described in the Caribbean region (12). New viruses, often originating from Southeast Asia, arise as successive waves, replacing previous ones. In this regard, sampling of DENV-3 subtype III virus nucleotide sequences from all countries in the Caribbean and the peri-Caribbean area need to be expanded so that we can understand DENV circulation in the region.

Dr. Peyrefitte spent 4 years as a research assistant in the tropical virology unit at the Tropical Medicine Institute of the French Armed Forces Medical Service, in the diagnosis of arthropodborne viral diseases. He also works on arbovirus-cell interactions.

We are indebted to H. Puggelli for primer synthesis.

This work was partially funded by the French Armed Forces Medical Service and the French "Délégation Générale pour l'Armement."

The opinions and assertions contained herein are the private ones of the writers and are not to be construed as official or reflecting the views of the French Armed Forces Medical Service or the French Army at large.