To determine risk for drug-resistant malaria parasites entering Madagascar from Comoros Islands, we screened travelers. For the 141 Plasmodium falciparum isolates detected by real-time PCR, frequency of mutant alleles of genes associated with resistance to chloroquine and pyrimethamine was high. International-level antimalarial policy and a regional antimalarial forum are needed.

Historically, the Comoros Islands and Madagascar have been linked by human travel, and the importation of pathogens has already been documented, in the cholera epidemic of 1998–1999 (8) and in more recent outbreaks of arbovirus infection (9,10). Most travel between the Comoros Islands and Madagascar occurs through the seaport and airport of Mahajanga, the main city on the northwestern coast of Madagascar. To improve the monitoring of antimalarial drug resistance in Madagascar, we assessed the frequency of P. falciparum mutant alleles of genes associated with resistance to chloroquine (pfcrt and P. falciparum multidrug resistance 1 [pfmdr-1] gene) and pyrimethamine (dhfr) among travelers entering Madagascar from the Comoros Islands.

The study was performed from March to July 2006, in the seaport and the airport of Mahajanga, on the northwest coast of Madagascar (Figure 1). These sites are the main communications crossroads between the Comoros Islands and Madagascar. The study was approved by the National Ethics Committee of the Ministry of Health and Family Planning of Madagascar.

All travelers from the Comoros Islands who consented to participate on arrival in Madagascar, regardless of their age, sex, nationality, and presence or absence of symptoms, were enrolled in the study. For each participant, a questionnaire was filled out and a finger-prick blood sample was collected. Rapid diagnostic tests (OptiMAL-IT, DiaMed AG, Cressier sur Morat, Switzerland) and thick/thin blood smears were performed in the field. Patients with a positive rapid test result were promptly treated with an artesunate and amodiaquine combination (Arsucam, Sanofi-Aventis, Paris, France), according to Madagascar’s national malaria policy.

Thick/thin blood smears were stained and analyzed by an experienced technician, without reference to rapid test results. A minimum of 200 consecutive fields were counted for each thick blood film before a slide was classified as negative. The number of parasites in thick blood films was determined per 200 or 500 leukocytes, assuming 8,000 leukocytes/μL of blood. Thin blood smears were also examined for other Plasmodium spp.

Parasite DNA was extracted from blood samples by using the phenol/chloroform method. P. falciparum carriers were detected by real-time PCR in a RotorGene 3000 thermocycler (Corbett Life Science, Sydney, New South Wales, Australia), as described by Mangold et al. (11). PCR and restriction fragment length polymorphism analyses were performed for 3 genes (codon 108 of dhfr, codon 76 of pfcrt, and codon 86 of pfmd-1) for the detection of mutant alleles. (Detailed descriptions of these methods are available from http://medschool.umaryland.edu/cvd/plowe.html.) Laboratory strains of P. falciparum were used as controls (positive and negative) and included in all PCR and enzyme digestion procedures (DNA from the W2, HB3, and 3D7 reference strains from the Malaria Research and Reference Reagent Resource Center, Division of Microbiology and Infectious Diseases, National Institute of Allergy and Infectious Disease, National Institutes of Health, Manassas, VA, USA). Statistical analyses were performed by using SPSS software (SPSS Inc., Chicago, USA). Odds ratios were calculated from logistic regression parameter estimates, and p values were determined with the significance level set at p<0.05.

Among the 1,130 travelers registered on arrival in Mahajanga, 947 agreed to participate in the study (crude participation rate 83.8%). The baseline characteristics of the enrolled travelers are given as a function of nationality (Comorian or Malagasy) in the Table. The frequency of P. falciparum carriers was 0.5% (5/947) according to rapid diagnostic test, 3.2% (30/947) according to microscopy, and 14.9% (141/947) according to real-time PCR. 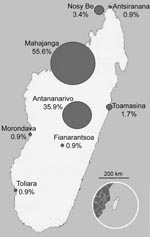 Figure 2. Map assessing the potential risk for spread of Plasmodium falciparum mutant-type alleles associated with resistance to chloroquine and pyrimethamine from the Comoros Islands to Madagascar, Mahajanga, Madagascar, 2006.

For the 141 P. falciparum isolates detected by real-time PCR, the frequency of the mutant alleles of genes associated with resistance to chloroquine (pfcrt and pfmdr-1) and pyrimethamine (dhfr) was 80.1% (113/141) for the 76T mutant allele of the pfcrt gene, 99.3% (140/141) for the 86Y mutant allele of the pfmdr-1 gene, and 95.0% (134/141) for the 108N allele of the dhfr gene. More detail is provided in the Table. Univariate analysis of risk factors associated with the carriage of P. falciparum mutant alleles showed that for Comorian travelers, only a history of travel in Africa in the past 3 months was identified as significant (odds ratio 2.29, 95% confidence interval 1.27–4.13, p<0.01). We used these data to generate a map assessing the potential risk for the spread of P. falciparum mutant-type alleles in Madagascar (Figure 2).

Despite some methodologic limitations (limited study period, limited number of passengers screened, taking into account only registered travelers), this study provides the first, to our knowledge, direct measurement of parasite movement between the Comoros Islands and Madagascar. This study thus enables an assessment of the potential threat of P. falciparum mutant allele parasites being introduced into Madagascar.

First, we noted that for detection of P. falciparum carriers, real-time PCR was 4.6 times more sensitive than microscopy and 30 times more sensitive than rapid diagnostic testing based on parasite lactate dehydrogenase detection, according to the threshold detection level of the techniques used (11,12). The results suggest that most of the P. falciparum carriers had low-level parasitemia. Second, most of the imported parasites carried resistance-associated mutations, consistent with the frequency of mutant forms of P. falciparum circulating in the Comoros Islands (4,5). Third, according to the places in which the Comorian travelers stayed and the places in which the Malagasy travelers lived, the potential area of antimalarial drug–resistant parasite spread was located in the northwestern area, which has a transmission season of >6 months per year (13).

On the basis of our findings, we suggest that antimalarial drug policy should be formulated at an international, rather than a national, level. Given that the Malagasy government’s goal is moving toward malaria elimination, international considerations in antimalarial policy would avoid the possibility of a coherent national policy being annulled by mutations originating in or spreading through neighboring countries. For example, the introduction of high-level chloroquine or pyrimethamine resistance from the Comoros Islands could compromise the use of the artesunate and amodiaquine combination as a first-line treatment for uncomplicated falciparum malaria or the use of sulfadoxine-pyrimethamine for intermittent preventive treatment in pregnant women and render these strategies useless.

In conclusion, we suggest the creation, as soon as possible, of a regional antimalarial forum in the Indian Ocean, similar to the East African Network for Monitoring Antimalarial Treatment (www.eanmat.org). Such a forum would enable the countries of the region to share national information on antimalarial drug efficacy, such as the prevalence of drug resistance molecular markers, and to debate proposed changes in national policy.

Dr Ménard is head of malaria unit research in the Institut Pasteur of Madagascar. His current research interest is surveillance of antimalarial drug resistance in Madagascar.

We thank the travelers for their participation in this study and the trainee doctors for their valuable assistance.

This study received financial support from the French Government through the FSP/RAI 2001-168 project (French Ministry of Foreign Affairs) and from the Global Fund to Fight AIDS, Tuberculosis and Malaria, round 3 (Community Action to Roll Back Malaria, grant no. MDG-304-G05-M).

Page created: July 05, 2010
Page updated: July 05, 2010
Page reviewed: July 05, 2010
The conclusions, findings, and opinions expressed by authors contributing to this journal do not necessarily reflect the official position of the U.S. Department of Health and Human Services, the Public Health Service, the Centers for Disease Control and Prevention, or the authors' affiliated institutions. Use of trade names is for identification only and does not imply endorsement by any of the groups named above.