A 53-year-old man was admitted to an intensive care unit of our hospital (University Teaching Hospital, Montpellier, France) on April 28, 2006, with a high fever and in a comatose state. The day before, he had experienced headache and neck pain. He had been infected with HIV for 9 years but had not had an opportunistic infection. His ongoing HIV treatment consisted of ritonavir, lopinavir, abacavir, lamivudine, and co-trimoxazole; 3 weeks before admission, his blood CD4+ T-cell count was 133/μL, and viral load was 118,000 copies/mL. At the time of admission, his body temperature was 38.9°C, heart rate was 105 beats/min, and blood pressure was 55/35 mmHg. He exhibited a fixed pupil in 1 eye, neck stiffness, and was nonresponsive. He had bilateral pulmonary infiltrates and severe hypoxemia. Treatment consisted of mechanical ventilation, fluid therapy, and norepinephrine. Laboratory investigations found the following: leukocyte count 9,600/mm3 with 90% neutrophils, hemoglobin level 9.0 g/dL, platelet count 32,000/mm3, C-reactive protein value 159 mg/L, and blood lactate concentration 3.2 mmol/L. Computed tomographic scanning of the brain showed no hemorrhage or edema. Lumbar puncture produced turbid cerebrospinal fluid (CSF) with 300 leukocytes/mm3 (95% neutrophils), protein 5.6 g/L, glucose <0.1 mmol/L, and gram-positive cocci. Three sets of aerobic-anaerobic blood cultures and bronchial aspirates were sampled, and intravenous treatment with dexamethasone (10 mg/6 h/day), cefotaxime (2 g/4 h/day), and vancomycin (30 mg/kg/day) was initiated. On day 2, the hemodynamic state was stabilized, but brain death occurred. 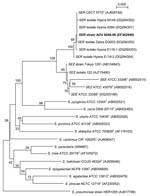 All sets of aero-anaerobic blood cultures, CSF, and bronchial aspirate fluid yielded the growth of a catalase-negative, β-hemolytic, gram-positive cocci belonging to the Lancefield group C of streptococci. Antimicrobial susceptibility testing showed a bacterium fully susceptible to antibiotics tested. MICs of penicillin, amoxicillin, and cefotaxime were 0.047, 0.125, and 0.125 mg/L, respectively. The isolates were identified as S. equi by using the Vitek2 system, rapid ID32 STREP, and API 20 STREP strips (bioMérieux, Marcy l’Etoile, France), but phenotype was inconclusive for subspecies identification. The strains were identified as S. equi subsp. zooepidemicus by Vitek2, but aesculin was not hydrolyzed, and D-ribose fermentation was noted, as previously described for S. equi subsp. ruminatorum. 16S rRNA gene–based identification was performed as previously described (4) on strain ADV 6048.06 from blood. The 1,396-bp sequence (GenBank accession no. EF362949) was compared with databases by using the BLAST program (5); the sequence differed by only 1 nucleotide position (>99.9% identity) from the sequence of S. equi subsp. ruminatorum CECT 5772T. Other primarily related sequences were from S. equi subsp. ruminatorum strains of animal origin (99.5%–99.9% identity) and from S. equi subsp. zooepidemicus, (98.7% identity). Phylogenetic trees clustered the clinical isolate with S. equi subsp. ruminatorum strains to form a robust lineage, well separated from other strains of S. equi and supported by a high bootstrap value (Figure).

Epidemiologic investigations were unsuccessful in tracing the patient’s infection to an animal source. The respiratory tract, from which S. equi subsp. ruminatorum was recovered in pure culture, could be considered the most probable portal of entry.

The mode of S. equi subsp. ruminatorum transmission to humans remains unknown. More information is needed on its reservoirs, but they likely resemble those of S. equi subsp. equi, and S. equi subsp. zooepidemicus (2,6,7). Prevention of human infections due to S. equi should include frequent microbiologic sampling of lactating animals and control measures for unpasteurized dairy products (7). Better characterization of underlying conditions that increase risk of invasive S. equi infections is also needed. This knowledge could help define high-risk groups of persons and could lead to generation of specific preventive recommendations.