Since 1987, Salmonella Enteritidis has been one of the most frequently isolated salmonellae associated with foodborne outbreaks (1). Illness from S. Enteritidis is linked to consumption of chickens, eggs, and foods that contain eggs (2). S. Enteritidis presents an interesting challenge from an epidemiologic perspective. Several reports documented a limited number of genotypes among ecologically diverse S. Enteritidis, reinforcing the notion that most S. Enteritidis strains are derived from a few endemic clones (3,4).

We examined 76 strains of S. Enteritidis and 74 strains of S. Typhimurium. Strains were isolated from poultry and poultry-related sources and were obtained from the Center for Veterinary Medicine and Center for Food Safety and Applied Nutrition of the US Food and Drug Administration and from the University of Georgia. After screening numerous restriction enzymes, the 6 selected were XbaI, BlnI, and SpeI, all used in PulseNet protocols (5); SfiI and PacI, previously used to improve resolution in PFGE studies involving Escherichia coli O157:H7 (8,9); and NotI, found to yield an optimal number of cut sites (10). The standard PulseNet PFGE protocol for non-typhoidal Salmonella was performed as described (11,12). Individual run conditions are listed in Table 1.

Five diversity indices were used to assess discriminatory potential among enzymes. First, unique PFGE patterns or pattern combinations, when analyzing >2 enzymes, were tallied. Second, the mean number of strains per polytomy (an unresolved strain cluster) was calculated as the number of polytomous strains divided by the number of polytomies in the tree. Third, the percentage of polytomous strains (of 76 S. Enteritidis strains) was calculated. Fourth, the node:strain ratio was calculated as the number of nodes (bifurcating tree forks) divided by 76 S. Enteritidis strains. A node:strain value closer to 1 indicated a more resolved tree. Finally, the Simpson diversity index was calculated as a numerical assessment of the relative discriminatory potential of each enzyme and enzyme combination (13). 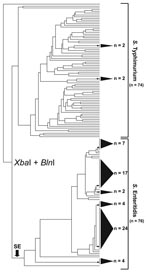 XbaI-BlnI patterns from 76 S. Enteritidis strains and 74 S. Typhimurium strains were analyzed simultaneously for a direct comparison of PFGE diversity. The resultant dendrogram yielded striking topologic differences between the 2 serovars (Figure 1). S. Typhimurium strains were almost entirely resolved; nearly every strain possessed its own branch on the dendrogram. In contrast, S. Enteritidis strain discrimination was sharply weaker, affirming extensive genetic homogeneity among strains. For example, 6 polytomies were evident in the S. Enteritidis portion of the tree, 5 of which comprised 4 or more strains and 1 of which comprised 24 strains. In total, 76% of S. Enteritidis strains occupied unresolved clusters with an average of ≈10 strains per cluster. Moreover, the S. Typhimurium dendrogram retained a nearly 1:1 ratio of nodes to strains, indicating that almost every strain retained a unique XbaI/BlnI pattern combination. S. Enteritidis, however, yielded a node:strain ratio of 1:3, indicating a relatively poorly bifurcated tree. Together, these observations highlighted the difficulty in differentiating S. Enteritidis with conventional PFGE approaches.

To develop a more discriminatory scheme for S. Enteritidis, we examined pattern diversity for 4 additional restriction endonucleases (SpeI, SfiI, PacI, and NotI). Diversity indices associated with each of the 6 enzymes are listed in Table 2. Many of the indices designated NotI as being effective for discriminating S. Enteritidis. Among the 6 enzymes, NotI yielded the highest number of unique patterns (n = 26), the fewest average number of strains per polytomy (5.2), the lowest percentage of strains captured by polytomies (82%), the highest node:strain ratio (0.47), and the highest Simpson diversity value (0.92). NotI was followed closely by PacI for most indices, which suggests that PacI was also useful for S. Enteritidis strain discrimination.

Previous studies that used PFGE noted the combining of restriction enzyme data into a single analysis as an approach for improving strain differentiation (8,9). In our study, a dendrogram of the combined 6-enzyme S. Enteritidis data was highly resolved and yielded 57 unique pattern combinations. The tree contained, on average, 3.6 strains per polytomy (n = 8), and only 38% of the strains in the 6-enzyme tree were associated with unresolved clusters (Table 2). The node:strain ratio was 0.78, and the Simpson index was 0.98, surpassing the accepted threshold (0.95) for a useful subtyping scheme (14).

Although highly effective for S. Enteritidis discrimination, 6-enzyme simultaneous analysis would increase the time and resources needed to complete investigations. Thus, a streamlined PFGE scheme with enhanced discrimination was desirable. First, 2-enzyme combinations were assessed to ascertain a minimal enzyme set for useful discrimination of S. Enteritidis. Combinations SfiI/NotI and PacI/NotI yielded optimal diversity measures, compared with the others (Table 2). However, because no 2-enzyme pair rivaled the discriminatory potential of the 6-enzyme analysis, 3-enzyme combinations were explored. A SfiI/PacI/NotI combination was found to be superior in all diversity categories (Table 2). It yielded 51 unique pattern combinations, an average of 3.3 strains per unresolved cluster, a node:strain ratio of 0.79, and a Simpson index of 0.98. The latter 3 measures matched or exceeded corresponding values in the 6-enzyme analysis, which indicates that most of the diversity in the 6-enzyme analysis was captured by this 3-enzyme combination. 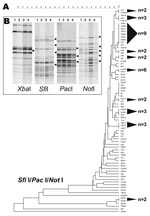 Figure 2. A 3-enzyme pulsed-field gel electrophoresis (PFGE)–based discriminatory scheme of Salmonella Enteritidis. A) Dendrogram derived from the combined analysis of PFGE data from SfiI, PacI, and NotI. Shaded cones to the right...

The SfiI/PacI/NotI dendrogram showed a highly resolved tree topology and earmarked this 3-enzyme combination as being particularly effective for differentiating S. Enteritidis strains (Figure 2, panel A). Of 11 clusters, 9 comprised 3 or fewer strains, and only 47% of S. Enteritidis strains composed these 11 clusters, which, aside from the 6-enzyme analysis, represented the lowest portion of polytomous strains in the study.

Dr Zheng is a microbiologist and a faculty research associate at the University of Maryland, College Park, Maryland, USA. Her research interests include molecular characterization and pathogenesis of foodborne bacterial pathogens.