African swine fever is a highly contagious disease of pigs in Africa. Although its persistence in Senegal may be caused by asymptomatic carriers involved in the domestic transmission cycle, we demonstrated that the soft tick Ornithodoros sonrai can be naturally infected with the causative agent.

African swine fever (ASF) is one of the most severe diseases of pigs in Africa. It is caused by African swine fever virus (ASFV), an Asfaviridae virus, and usually results in acute hemorrhagic fever in susceptible animals with mortality rates up to 100% in some herds (1). ASF is defined by the World Organization for Animal Health as a highly contagious disease that can spread rapidly and have serious socioeconomic effects in international trade of pigs or pig products and food security. No treatment or vaccine is currently available, and control is essentially based on sanitary measures (1).

ASF is endemic in eastern and southern Africa, where ASFV is maintained either in a sylvatic cycle between warthogs (Phacochoerus aethiopicus) or bushpigs (Potamochoerus spp.) and soft tick vectors of the Ornithodoros moubata complex or in a domestic cycle that involves pigs of local breeds with or without tick involvement (2–4). Long-term persistence of ASFV caused by the presence of the soft tick vector O. erraticus (5) has also been reported in the Iberian Peninsula.

In west Africa, ASFV has been introduced several times since the 1970s in different countries by importing infected pigs or meat. These imports resulted in massive sporadic outbreaks that have been eradicated (6). Senegal has had several outbreaks caused by regular reemergence of ASFV since its first description in 1959, which suggests a unique epidemiology that has not been reported in most west African countries infected with ASFV (6). The presence of warthogs (7) and the soft tick O. sonrai (8) in Senegal suggest a sylvatic cycle of ASF. O. sonrai is closely related to O. erraticus and the O. moubata complex and shares similar vector competence for some pathogens, such as Borrelia, which causes human relapsing fever in Africa (9). This article reports preliminary results on potential involvement of O. sonrai in persistence and transmission of ASFV and discusses the role of reservoirs or vectors in control measures.

Figure 1. Sampling sites in the Fatick region of Sine-Saloum, Senegal.

Tick investigations were conducted in January 2006 in the Fatick region of Sine-Saloum in west-central Senegal (Figure 1). This region is a major area of pig production and a center for trade with Dakar and Casamance in Sengal and Bissau-Guinea (10). Despite no national reporting, ASF outbreaks occur almost every year in Sine-Saloum (6,10). O. sonrai has also been found in the Fatick region of Senegal in previous investigations on human relapsing fever (11). 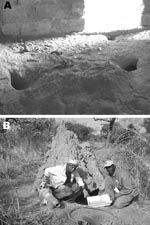 Three criteria were selected to assess the role of O. sonrai in ASF (12): presence of this tick in domestic pig buildings and warthog habitats, its probability of contact with domestic pigs and warthogs, and its natural infection with ASFV. We searched for O. sonrai in pigpens in 5 villages or groups of villages, 20–30 km apart per sampling site, along a north-south transect, as well as in warthog burrows in wild areas from 3 different forests (Figure 1). For tick collection, we used a portable gasoline-powered vacuum cleaner adapted for burrow-dwelling ticks (13) (Figure 2, panel B). Specimens were stored in liquid nitrogen. Pigpens and warthog burrows were systematically described to determine ecologic preferences of O. sonrai. Rodent or insectivore burrows, which are known to be favorable natural habitats for O. sonrai, were also examined at each sampling site to determine the presence or absence of the tick. Collected ticks were tested for ASFV infection by nested PCR amplification of the VP72 gene, a method considered most sensitive for detection of viral DNA in ticks (14).

O. sonrai was found in 11 of the 25 examined pigpens in villages in the 4 most northern sampling sites (Table). Specimens were always found in rodent and insectivore burrows or in deep hollows, in openings inside pig buildings, or near sleeping or foraging areas around pig buildings, as described for the closely related Iberian soft tick O. erraticus during investigations of ASF (5) (Figure 2, panel A). O. sonrai was not found in litter or buildings, except at 1 farm in Fatick, where nearby burrows were highly infested. The village of Karang showed negative results, even in suitable microhabitats, a finding that confirmed the southern distribution limit of O. sonrai proposed by Morel (8). In wild areas, O. sonrai was not found in 10 warthog burrows examined (Figure 2, panel B), although its presence was confirmed in contiguous rodent or insectivore burrows. Of 36 ticks tested for ASFV infection, 4 from the 4 most northern sampling sites were positive for ASFV (Table). The farms where ASFV was detected in ticks had reported recent outbreaks in the summers of 2004 and 2005, except for the farm in Fatick. This farm, which belonged to a fattener/collector, had a high turnvover rate of pigs that may have caused difficulties in monitoring their health. Sequencing and BLAST analysis (www.ncbi.nlm.nih.gov) of PCR products confirmed a 100% relationship with ASFV. One sample was positive by repeated analysis. Three samples showed doubtful results when retested by PCR, which indicated low virus titers.

To our knowledge, this study demonstrated for the first time that O. sonrai is naturally infected with ASFV. Although these preliminary results suggest a role for O. sonrai in persistence of ASFV within a sylvatic cycle, only experimental infections will enable formal testing of O. sonrai as a reservoir and competent vector for AFSV. Additional tick sampling and virus detection analyses are also being conducted to estimate its natural prevalence of infection. If one considers that the ability of pathogens to infect a wide range of hosts is a risk factor for disease reemergence (15), our findings are useful for the design of control measures for ASF in Senegal, which currently focus only on pig slaughtering and environment disinfection.

Although contact between soft ticks and domestic pigs has been confirmed in villages in this study, this contact is considered limited. O. sonrai colonizes mainly rodent or insectivore burrows with high humidity and a cool temperature favorable for its development and survival. It is rare that such favorable microhabitats are near pigpens and enable ticks to feed on pigs instead of small mammals inhabiting burrows. In addition, heterogeneous and relatively low infestation rates for such microhabitats have been shown in a previous study (11). Conversely, in wild areas, contact between ticks and warthogs was unlikely, which is contrary to the situation in eastern and southern Africa. In Senegal, warthogs inhabit mainly dry forests and dig superficial burrows under termite mounds, which are not optimal conditions for O. sonrai. To more clearly quantify contacts between ticks and domestic pigs or warthogs and assess their effect on ASF transmission, analyses of mammalian cytochrome B in tick blood meals and detection of antibodies to tick saliva in serum samples of pigs and warthogs are being conducted.

We thank Omar Niang for help with field work, the Institut de Recherche et de Développement and the Institut Sengelais de Recherches Agricoles in Dakar for providing equipment and facilities, Jean-Louis Camicas for assistance with tick identification, and Philip Agnew for editing the manuscript.

This study was supported by the Wellcome Trust Foundation.