We describe a 66-year-old woman with therapy-refractory cryoglobulinemia treated with rituximab, plasmapheresis, and steroids; a case of fatal meningoencephalitis caused by Acanthamoeba spp. then developed. Such infections are rare and show an unusually rapid course (possibly related to rituximab).

Infection with Acanthamoeba, a free-living ameba, is a rare cause of slowly progressive granulomatous amebic encephalitis (GAE) in immunocompromised patients. This form of encephalitis is almost universally progressive and fatal, typically within 2 months of symptom onset (1). We describe a patient with cryoglobulinemia refractory to standard therapy who died of GAE after receiving rituximab.

Rituximab is a monoclonal antibody directed against CD20, a surface antigen expressed in cells of B-lymphocyte lineage. It was developed for treatment of B-cell lymphomas. Recently, therapy with rituximab has been extended to a variety of autoimmune diseases in which B cells have been thought to play a role. The drug substantially depletes normal B cells from the peripheral blood and its use leads to a prolonged period of humoral immune dysfunction (2).

Figure 1. Magnetic resonance image of the patient’s brain after the first seizure showing a hemorrhagic lesion in the right frontal lobe.

In March 2005, a 66-year-old woman was referred to our hospital because of status epilepticus. A diagnosis of hepatitis C had been made in 2003. In January 2005, hepatitis C–related cryoglobulinemic vasculitis with cutaneous and renal involvement developed. The cryoprecipitate contained 586 mg/L of immunoglobulin G (IgG) and 517 mg/L of IgM (normal <10 mg/L). Treatment with prednisolone (1 g intravenously for 3 days, followed by 64 mg orally once a day until day 31) was started in January 2005 (day 1). Despite this treatment, the vasculitis worsened. Plasmapheresis was started on day 10 (8 sessions) and resumed on day 39 (10 sessions). The patient’s cryocrit decreased. The prednisolone dose was tapered on day 31 to 16 mg. Increasing palpable purpura on the lower legs was observed on day 46. The decision was made to start rituximab infusions (375 mg/m2), which she received starting on day 48 on a weekly basis; she received 2 infusions. On day 55, she had a seizure and was transferred to the intensive care unit. She was deeply comatose with a Glasgow coma score of 4/15. Vital signs were normal. Magnetic resonance imaging showed a T2 hyperintense lesion in the left frontal region of the brain (Figure 1). At that time, the lesion was believed to be related to the cryoglobulinemia. Examination of cerebrospinal fluid (CSF) showed a protein level of 228 mg/dL, a glucose level of 53 mg/dL, and 13 lymphocytes/µL. Culture of blood and CSF, serologic tests, and PCR did not show any fungi, viruses, or bacteria. The patient remained in a nonconvulsive status epilepticus despite combination anticonvulsive therapy. She died on day 61. 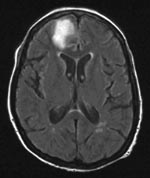 Postmortem examination showed signs of glomerulonephritis, liver fibrosis, and moderate signs of myocarditis. A formalin-fixed, 1,378-g brain specimen showed no discoloration or meningeal opacification throughout most parts of the brain. Small lacerations were visible in the pedunculus cerebri superior and both hemispheres of the cerebellum. No obvious intraparenchymal bleeding was present. Hematoxylin and eosin–stained sections showed a necrotizing hemorrhagic meningoencephalitis and adjacent recent infarctions. Numerous trophozoites and Acanthamoeba cysts were observed within necrotic areas and overlying meninges. Trophozoites were predominantly perivascularly located in nonnecrotic areas and cysts were detectable within blood vessel walls (Figure 2A). For immunohistochemical analysis, 3-µm–thick sections of paraffin-embedded brain tissue were cut and stained with an antibody to Acanthamoeba spp. (from rabbits immunized with Acanthamoeba genotype T4) at a dilution of 1:2,000. Antigen retrieval was performed by heating sections in 0.01 mol/L citrate buffer (pH 6.0) for 60 minutes. ChemMate kit K5001 (Dako, Glostrup, Denmark) was used for immunostaining (Figure 2B).

We conducted a PCR for detection of Acanthamoeba spp., Balamuthia mandrillaris, and Naegleria fowleri in brain tissue and CSF by using JDP primers for a diagnostic small subunit rDNA fragment as previously described (3). Acanthamoeba DNA was detected in brain tissue but not in CSF. Typing of the Acanthamoeba strain by sequencing the amplified partial small subunit rRNA gene region (ASA.S1) with primer 892c as previously described (4) showed that the strain had genotype T4. The sequenced region is identical to that found in the European Molecular Biology Laboratory database (accession no. AP07407 (Figure 2C).

We report a rapidly fatal case of GAE in a woman with cryoglobulinemia treated with rituximab. GAE is a rare but often lethal subacute cause of meningoencephalitis, typically occurring in immunocompromised patients. Acanthamoeba spp. are the most common free-living amebae, are ubiquitous in the environment, and are widespread in water and soil. Low-level antibody titers are found in >50% of asymptomatic patients (5,6). More than 20 species of these amebae have been described (1). In addition to causing keratitis after use of contact lenses, Acanthamoeba spp. are responsible for meningoencephalitis in chronically ill, debilitated patients, in patients taking immunosuppressive drugs or receiving chemotherapy, and in patients with AIDS (1). GAE shows a chronic course with atypical symptoms of low-grade fever, encephalopathy with cognitive abnormalities, headache, and seizures. This disease is rarely identified in patients before death. CSF analysis shows moderate pleiocytosis, but it rarely contributes to the diagnosis because amebae are generally not found in the CSF. Recently, detection of serum antibodies was successfully used in screening for free-living amebae in patients in California with encephalitis (7). However, this process proved to be of value mainly for identifying B. mandrillaris, another free-living ameba.

Evidence of Acanthamoeba infection was recently found by PCR in brain tissue of a patient with lupus, even without isolating the ameba (8). A PCR with tissue and CSF is potentially useful in clinical laboratories in identifying the cause of meningoencephalitis without the need for specific antibodies.

Because the patient’s cryoglobulinemia was poorly controlled, we decided to begin treating our patient’s condition with rituximab. This monoclonal antibody has been shown to be effective in treating cryoglobulinemia resistant to standard therapies with corticosteroids and plasmapheresis (9). This antibody against the CD20 receptor on the surface of the B lymphocytes destroys these cells by mechanisms involving complement-mediated and antibody-dependent cytotoxicity (10). Levels of B cells remain low for 2 to 6 months, which leads to long-term humoral immune dysfunction. Serious viral infections such as erythrocyte aplasia caused by parvovirus B19, fatal hepatitis B, and cytomegalovirus and varicella zoster virus infections have been reported after administration of rituximab (11–14). The fact that our patient died of Acanthamoeba encephalitis is striking because rituximab is believed to interfere with humoral immunity, which is not known to play a major role against free-living amebic infections.

We identified a temporal relationship between the weekly rituximab treatments and meningoencephalitis. Although the patient received corticosteroids and underwent plasmapheresis, GAE developed only after rituximab infusions had begun and the steroid dose was being tapered. It is not clear whether rituximab is the only agent responsible for the GAE, or what contributions were made by the earlier treatments the patient received. We could not identify the source of infection in this patient. In particular, we found no evidence for nosocomial acquisition. No other patient had a diagnosis of Acanthamoeba brain infection, and no one receiving rituximab had unexplained meningoencephalitis in 2005 in our institution. Our hypothesis is that Acanthamoeba spp. were already present in the brain at the time of the first rituximab infusion, but that rituximab may have precipitated the unusually rapid course of the encephalitis.

Rituximab is obtaining widespread use in hematologic and autoimmune diseases as an adjuvant therapy. The full spectrum of opportunistic infections in patients receiving combinations of immunosuppressive regimens remains to be elucidated and warrants vigilance.

We are greatly indebted to Elke Wollants for performing the PCR for Acanthamoeba spp. on brain tissue and CSF.