We isolated Candida dubliniensis from a nonhuman source, namely, tick samples from an Irish seabird colony. The species was unambiguously identified by phenotypic and genotypic means. Analysis of the 5.8S rRNA gene showed that the environmental isolates belong to C. dubliniensis genotype 1.

The ever increasing number of immunosuppressed humans has led to a marked rise in opportunistic infections, particularly those caused by fungi (1). Candida albicans is the yeast species most commonly associated with oropharyngeal and systemic candidiasis in immunocompromised persons. However, the last 2 decades have seen an increase in infections by other Candida species, including C. dubliniensis, which was first recognized as distinct from C. albicans in 1995 in Ireland (2,3). C. dubliniensis has been recovered mainly from the oral cavities of HIV-infected persons (4) but also from lungs, vaginas, blood, and feces; occasionally this organism causes fatal systemic infections (5). Isolates are assigned to 4 genotypes, defined by the sequence of the internal transcribed spacer regions of the rRNA gene (6).

C. dubliniensis is globally distributed. In HIV-infected patients, the oral prevalence is 1.5%–32% (5). In healthy persons not infected with HIV, C. dubliniensis is absent or rare, but 14% of healthy Caucasians had oral C. dubliniensis in a South African study (7). Like C. albicans, C. dubliniensis may be a member of the normal oral microbial flora of humans, and oral candidosis may result from overgrowth of resident strains. In contrast to other Candida species, some of which are associated with birds (8,9), C. dubliniensis has not been found to date in nonhuman environmental sources. This has led to speculation that the species may be restricted to humans, possibly occupying sites deep within the oropharynx or upper respiratory tract (5).

Fungal strains were obtained from Ixodes uriae ticks (as part of a National Environment Research Council–funded study of a tickborne virus) at a seabird breeding colony on Great Saltee Island, Ireland (52°07′N, 6°36′W). The ticks were taken from cracks in cliffs used by common guillemots (Uria aalge). Tissue cultures of tick homogenates undertaken for virus isolation were occasionally contaminated with yeastlike fungi.

Fungal isolation was undertaken on 2 separate days with samples from 2 distinct sites on the island (Table 1). On both days, Happy Hole West (HHW) ticks were processed immediately after Labour in Vain (LIV) ticks in the same class II microbiologic cabinet. No fungi were detected in HHW ticks, whereas 16.7%–27.6% of ticks sampled from 2 locations within LIV gave positive cultures (Table 1). Twenty-two isolates were obtained (Table 1); SL370–429 were from LIV-1 and SL495–531 from LIV-2 (SL = Saltee). 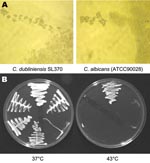 Figure 2. Alignment of the ITS1 5.8S ITS2 DNA region of Candida dubliniensis Saltee (SL) isolates and representative human isolates of genotypes 1–4. All polymorphic sites are shown: ITS1 (bp 32–137), 5.8S rRNA...

On SAB the colonies from positive cultures were a creamy white color with a glabrous appearance similar to C. albicans. SL375 had a mixed phenotype (large and small colonies, designated SL375–1 and SL375–2). Like C. albicans, all SL isolates were germ-tube positive and produced chlamydospores at 37°C on Corn Meal Tween 80 agar (Oxoid Ltd, Basingstoke, England, UK) and Czapek Dox (1%) Tween 80 agar (Oxoid) (Figure 1A). None of the SL isolates grew at 43°C on SAB (Figure 1B), which suggests that they might be C. dubliniensis (14). This was confirmed by carbohydrate assimilation tests (Table 2) and by sequencing the 5.8S rRNA gene (Figure 2). With the API 20C AUX kit, all SL isolates yielded the same profile at 48 h, interpreted as 99.9% C. dubliniensis (Table 2). Eleven isolates from LIV-1 and the C. dubliniensis (NCPF 3949) reference strain were also tested with API 32C. All had an identical profile (7143100015), interpreted as 81.9% C. dubliniensis and 16.9% C. albicans.

To determine whether C. dubliniensis was present on their outer surface LIV-2 and HHW-2 ticks (n = 102) were individually washed in 1 mL MEM before homogenization. C. dubliniensis was cultured from the wash supernatants of 8 of 9 ticks that proved positive after homogenization but not from any of the negative ticks. These findings strongly suggest that the fungus is present in particles adhering to the ticks.

Our serendipitous isolation of C. dubliniensis from the environment ends speculation (5) that the species might be confined to humans. Because ticks were collected from cracks filled with guillemot guano and the fungal isolates were associated with the surface of ticks, the most likely source of the fungus is bird excrement. Thus, like C. albicans (8), C. dubliniensis may inhabit the digestive tract of marine birds. Only C. dubliniensis was isolated from the Great Saltee ticks; however, we have detected other Candida spp. from both soil and tick samples (unpub. data) at other seabird colonies, which suggests that marine as well as terrestrial birds (9) carry a variety of yeast species (15).

Dr Nunn heads the Tick and Tick-Borne Pathogen Research Group at the Centre for Ecology and Hydrology in Oxford. His research interests focus on the evolution and transmission of tickborne pathogens and functional characterization of tick immunomodulators.

We thank Stuart Murray for collecting tick and soil samples from Great Saltee Island and Guido Paesen for reviewing the manuscript.

This work was supported by the National Environment Research Council Environmental Genomics and Biodiversity Programs.