We applied multispacer typing (MST) by incorporating 9 variable intergenic spacers to Bartonella henselae DNA detected in lymph node biopsy specimens from 70 patients with cat-scratch disease (CSD), in cardiac valve specimens from 2 patients with endocarditis, and in 3 human isolates from patients with bacillary angiomatosis, CSD, and endocarditis. Sixteen MST genotypes were found, 5 previously identified in cats and 11 new. Of the studied DNA, 78.7% belonged to 2 genotypes, which were phylogenetically organized into 4 lineages. Human strains were mostly grouped within 2 lineages, previously identified as Marseille and Houston-1. Our results suggest a greater genetic diversity in human-infecting B. henselae than what has previously been evaluated by using other genotyping methods. However, the diversity is not significantly different from that of cat strains. MST is thus a suitable genotyping tool for evaluating the genetic heterogeneity of B. henselae among isolates obtained from human patients.

Bartonella henselae, first identified in 1990 and characterized as a new species in 1992, is a gram-negative, fastidious bacterium associated with cats. B. henselae infection in cats is usually asymptomatic, but infected cats may remain bacteremic for long periods, thus playing a major role as a reservoir for the bacterium (1,2). Transmission of B. henselae among cats may be mediated by the cat flea, Ctenocephalides felis (3), and to humans by cat scratches or bites (4). B. henselae infection in humans exhibits a variety of clinical syndromes including the most common, cat-scratch disease (CSD) (5), endocarditis (6), bacillary angiomatosis (7) and peliosis hepatis in immunocompromised patients (8), and other less frequent manifestations (9). B. henselae has also been detected in various domestic or wild animals, including dogs, lions, panthers, and cheetahs (10). More recently, B. henselae was detected in the porpoise, a marine mammal (11).

Because B. henselae has a complex and expanding host or reservoir system and has been associated with a rapidly increasing spectrum of clinical syndromes (12), epidemiologic survey and exploration of population structure of this organism are critical. The following techniques have been used for this purpose: pulsed-field gel electrophoresis (PFGE); restriction fragment length polymorphism; enterobacterial repetitive intergenic consensus (ERIC)–PCR; repetitive extragenic palindromic (REP)–PCR; infrequent restriction site (IRS)–PCR (10,13–18); DNA sequencing–based approaches represented by sequences of 16S rDNA (19,20), ftsZ (21), gltA (22), 35-kDa protein–encoding (23), groEL, and pap31 genes (24); and the 16S-23S intergenic spacer (25). These investigations gradually offered insight into the population structure of B. henselae and allowed several genetic groups to be identified. Initially, B. henselae isolates were classified within 2 16S rRNA–based genotypes, I and II, and 2 serotypes, Marseille and Houston-1 (20,23,26). Studies that used gltA, groEL, and pap31 gene sequence analysis, arbitrarily primed–PCR, ERIC-PCR, IRS-PCR, PFGE, or multilocus sequence typing (MLST) were congruent with serotypes, but not with genotype I and II classification (13,22–24,27–29). Altogether, B. henselae isolates were found to be distributed within 3 distinct lineages (Marseille, Houston-1, and Berlin-2), and the 16S rRNA gene was not a sensitive marker of the clonal divisions of B. henselae. This suggested that a 16S rRNA recombination occurred in this species that may be facilitated by the coexistence of several strains in the blood of cats (27).

Several studies have suggested that human-associated isolates were less genetically heterogeneous than cat isolates (22,27,30), and a small group of cat isolates were hypothesized to be the source of human infection (22,27). However, the limited discriminatory power of the available genotyping methods, with a maximum of only 7 genotypes identified (27), and the small number of human isolates studied prevented the population structure and the genetic relationship between cat and human isolates of B. henselae to be reliably investigated. Recently, we applied multispacer typing (MST), using 9 highly variable intergenic spacers, to 126 B. henselae cat isolates and identified 39 MST genotypes, which made it the highest resolution typing system (available from http://ifr48.timone.univ-mrs.fr/mst_bhenselae/mst) (31). In this study, we applied MST, based on sequences from the 9 previously described variable intergenic spacers (31), to 75 human-infecting B. henselae isolates to evaluate their genetic diversity and compare it to that of cat isolates. 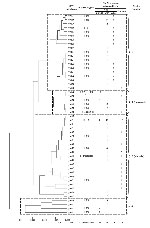 Appendix Figure. Dendrogram showing the phylogenetic organization of the 50 multispacer typing genotypes identified among 126 Bartonella henselae cat isolates and 75 B. henselae isolates detected in humans, constructed by using the neighbor-joining...

We included in the study, when available, lymph node biopsy specimens and cardiac valve specimens from patients with a clinical diagnosis of CSD or endocarditis who had been referred to our laboratory from 2004 to 2006. All specimens were then frozen at –80°C for further culture and molecular detection of Bartonella species. B. henselae was detected by using PCR targeting the 16S-23S rRNA spacer (ITS) and pap31 gene (24,25). In addition, 3 human B. henselae isolates—type strain Houston-1, isolated from the blood of a patient with bacillary angiomatosis in USA; type strain Marseille, isolated from the lymph node biopsy specimen of a patient with CSD in France; and strain URBHTOIE49, isolated from the valve biopsy specimen of a patient with endocarditis in France (26)—were incorporated in this study. All B. henselae isolates and PCR amplicons were tested by MST by using 9 variable intergenic spacers named S1-S9, from the most to the least variable among cat isolates (31). When available, the 16S rRNA genotypes of studied strains were indicated (Appendix Figure).

Total genomic DNA was extracted from the 3 studied B. henselae isolates by using the Chelex procedure as previously described (32). For patients’ specimens, we used the QIAamp Tissue kit (QIAGEN, Hilden, Germany) to extract the total genomic DNA, as described by the manufacturer.

ITS and pap31 gene PCR amplifications were performed by using the previously described conditions and the 16SF-23S1 (25) and PAPn1-PAPn2 (24) primer pairs, respectively. For amplification and sequencing of the 9 intergenic spacers, we used the same primers as in our previous study (31), except for primers amplifying spacers S1 and S8, which caused unspecific amplifications from DNA extracted from human specimens. One new set of primers was designed to amplify each of these 2 spacers, as indicated in the Appendix Table.

These new primers also amplified the whole intergenic spacer and thus did not affect genotype comparison between human and cat strains. All primers were obtained from Eurogentec (Seraing, Belgium). PCRs were performed in a PTC-200 automated thermal cycler (MJ Research, Waltham, MA, USA). One nanomolar concentration of each DNA preparation was amplified in a 25-μL reaction mixture containing 50 pmol/L of each primer; 200 μmol/L (each) dATP, dCTP, dGTP, and dTTP (Invitrogen, Gaithersburg, MD, USA); 1.5 U of HotstarTaq DNA polymerase (QIAGEN); 2.5 μL 10× PCR buffer; and 1 μL 25 mmol/L MgCl2. The following conditions were used for amplification: an initial 15-min step at 95°C was followed by 40 cycles of denaturation for 30 s at 94°C, annealing for 30 s at 55°C, and extension for 1 min at 72°C. Final amplification was completed by holding the reaction mixture for 5 min at 72°C to allow complete extension of the PCR products. PCR products were purified by using the MultiScreen PCR filter plate (Millipore, Saint-Quentin-en-Yvelines, France) as recommended by the manufacturer. Amplicons were sequenced in both directions by using the BigDye 1.1 chemistry (Applied Biosystems, Foster City, CA, USA) on an ABI 3130XL automated sequencer (Applied Biosystems) as described by the manufacturer. To avoid contamination, no positive control was used. Sterile water was used as a negative control in each PCR. Sequences from each DNA sample were checked twice in both directions to ensure the reliability of the MST method.

Nucleotide sequences were edited by using the Autoassembler package (PerkinElmer, Waltham, MA, USA). For each intergenic spacer, a genotype was defined as a sequence exhibiting unique mutations, which were checked by sequencing the corresponding spacers 3 times. MST genotypes were defined as unique combinations of the 9 spacer genotypes.

For the phylogenetic analysis, we concatenated sequences from the 9 studied spacers. We included in the analysis the 39 MST genotypes previously obtained from the MST analysis of cat isolates (31) and those, when different, obtained in the present study. Multiple alignment of sequences was carried out by using CLUSTALW software (33). Phylogenetic relationships were obtained by using the neighbor-joining and maximum parsimony methods within the MEGA 2.1 software (34), and the maximum likelihood method within the BioEdit software (available from www.mbio.ncsu.edu/bioedit/bioedit.html).

The genotypic diversities of human and cat strains of B. henselae were compared by using the Fisher exact test within the Epi Info 6.0 software (Centers for Disease Control and Prevention, Atlanta, GA, USA). A difference was considered statistically significant when p<0.01.

Genotypic Distribution of 75 B. henselae Strains Detected in Humans

The addition of 11 new MST genotypes to the 39 previously identified did not modify the phylogenetic distribution of 4 main clusters (lineages) described among cat isolates (31). However, the human strains had a specific phylogenetic distribution. Clusters 1 and 4 contained significantly fewer human strains than did clusters Houston-1 and Marseille (p<0.01). For cluster 1, this difference may be explained by the fact that this cluster contained only cat isolates from the United States and Asia, whereas we studied mostly human strains from France. The only human strain classified within cluster 1 was detected in 1 patient from the West Indies, but we acknowledge that this single patient, although exhibiting a specific genotype, does not allow us to draw any conclusions about the distribution of B. henselae genotypes in this area. Therefore, estimating the MST genotypes of human strains from the West Indies, United States, and Asia and comparing them to MST genotypes classified within cluster 1 might be useful. Regarding the distribution of strains within cluster 4 (4 cat strains from the United States, 10 cat strains from France, and 3 cat strains from Germany, but no human strain), we speculate that these strains may be less pathogenic for humans or that a sampling bias occurred. Thus, additional human and cat B. henselae isolates or amplicons from more countries will be needed to investigate the geographic correlation between human and cat isolates.

When we compared the MST classification to classification by 16S rRNA genotypes, we observed that 16SrRNA type I strains were restricted to clusters 1 and 2 (Houston-1), whereas most type II strains were grouped into clusters 3 (Marseille) and 4. However, a discrepancy between MST and 16S rRNA typing was observed within the Houston-1 cluster. One German cat strain classified in MST genotype 22 exhibited the 16S rRNA type II, in contrast to all other strains for which the 16S rRNA type was known, including other German strains. Such a discrepancy is consistent with the findings of Iredell et al., who demonstrated that 16S rRNA typing of B. henselae isolates was not entirely congruent with their lineage allocations (27).

In conclusion, we demonstrated, with 16 genotypes identified among 75 B. henselae human strains, that MST was more discriminatory than previously described methods for investigating B. henselae infection in humans. We did not find any statistically significant difference in genetic diversity between human and cat isolates of B. henselae. The studied human strains, although geographically limited, were phylogenetically organized into 2 clusters, which matched the origin of cat strains previously described as Houston-1 and Marseille clusters. Further studies incorporating strains from more diverse geographic origins and clinical features will be needed to improve our understanding of the population dynamics of B. henselae. We believe that MST can be a valuable tool for this purpose.

Dr Li is a physician and research scientist at the World Health Organization Collaborative Unité des Rickettsies in Marseille, France. His main research interests are the epidemiology and genetic diversity of human pathogenic bacteria.