We investigated the zoonotic potential of Waddlia chondrophila, a new Chlamydia-like abortigenic agent in ruminants. Anti-Waddlia antibody reactivity was tested by immunofluorescence and Western blot. Waddlia seroprevalence was higher in women who had had sporadic and recurrent miscarriages than in control women (p<0.001). Waddlia spp. may represent a cause of human fetal loss.

Approximately 15% of pregnancies end in miscarriage (1). However, a cause is identified in only 50% of these cases. Obligate intracellular bacteria, which fail to grow on media used routinely to isolate human pathogens, could represent yet unrecognized agents of miscarriage.

Chlamydia trachomatis, an intracellular bacterium, is the world’s most common sexually transmitted bacterial pathogen (2). Because C. trachomatis is asymptomatic, most infected women remain untreated. Although the effect of C. trachomatis infection on pregnancy outcome is unclear, an increased prevalence of C. trachomatis immunoglobulin (Ig) G antibodies in women with a history of miscarriage has been observed (2,3). Chlamydophila abortus is the most common etiology of abortion in ruminants (4) and can also cause miscarriage in pregnant women exposed to infected animals.

Waddlia chondrophila, another Chlamydiales, is a new abortigenic agent in bovines (5,6). This obligate intracellular bacterium was isolated from aborted fetuses in the United States (7) and in Germany (8). A serologic study further supported the abortigenic role of Waddlia in bovine species (6). Moreover, infection of bovine fetuses with Waddlia was associated with their deaths within 2 weeks (6). In this study, we tested women with sporadic and recurrent miscarriages for antibody reactivity against Waddlia and compared seroprevalence with that found in a control group of women with uneventful term pregnancies.

From July 2004 to March 2005, we studied 69 women with sporadic miscarriages (SM), 200 women who had suffered from recurrent miscarriages (RM), and 169 control women who had had uneventful pregnancies (Table 1). The RM group comprised women who had >3 miscarriages and who had attended the Recurrent Miscarriage Clinic of St Mary’s Hospital, London, the largest specialist referral center in Europe.

Immunofluorescence tests were performed (9); we used W. chondrophila strain ATCC VR-1470 as antigen and we screened sera at a 1:64 dilution with FluolineH (bioMerieux, Marcy l’Etoile, France). Antigen was isolated as described (10,11). Mice and rabbit anti-Waddlia antibodies were used as positive controls with a fluorescein-conjugated anti-mouse and anti-rabbit globulin. Sera that exhibited an Ig titer >64 were tested for IgG and IgM reactivity by using corresponding anti-human Ig fluorescein (FluolineG or FluolineM, bioMérieux) and serial 2-fold dilutions of serum. IgG and IgM positivity cut-offs were >1:64 and >1:32, as proposed for other chlamydia-like organisms. One hundred women had an anti-Waddlia IgG titer >64 (Table 1). Seroprevalence was higher for patients who had sporadic (31.9%) and recurrent (33%) miscarriages than that for women who had had uneventful pregnancies (7.1%, p<0.001 when comparing either SM or RM groups to controls). One woman had a positive IgM titer of 64 and an IgG titer of 512.

To confirm the specificity of immunofluorescence, we performed Western blot analyses on all Waddlia-positive sera samples. Western blot was performed (9), but Waddlia was used as the antigen. A polyclonal peroxidase-labeled anti-human IgG (Dako, Glostrup, Denmark) was used as a secondary antibody. The presence of anti-Waddlia IgG antibodies was confirmed by Western blot in 97 of the 100 positive samples by immunofluorescence (Table 1; Figure 1, panels B and C). By using Waddlia spp. hyperimmune mouse and rabbit sera and corresponding peroxidase-conjugated anti-mouse/rabbit sera, we obtained similar patterns of 61-, 55-, 53-, 45-, 41-, 38- and 30-kDa proteins (Figure 1, panels D and E). Antibody reactivity against the 55-, 53-, 45-, 41- and 38-kDa proteins disappeared after adsorption with 108 Waddlia antigen for 48 hours, which demonstrated the specificity of the antibody response (Figure 1, panel F).

For further statistical analyses, only patients whose samples were positive for Waddlia spp. by immunofluorescence and confirmed by Western blot were considered seropositive for Waddlia spp. (n = 97). In all age groups, the rate of Waddlia seropositivity was higher in patients who had miscarried than in those who had not (data not shown). Moreover, most women with anti-Waddlia antibodies did not exhibit serologic reactivity against C. trachomatis (Table 2). 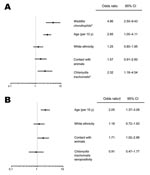 In a multivariate logistic regression adjusted for age, ethnicity, contact with animals and C. trachomatis serostatus (Figure 2), miscarriage (SM/RM) remained strongly associated with Waddlia seropositivity (odds ratio [OR] 4.9, 95% confidence interval [CI] 2.5–9.4). In this model, miscarriage was also independently associated with age (OR 2.9, 95% CI 2.0–4.1) and C. trachomatis seropositivity (OR 2.3, 95% CI 1.2–4.5). Additional multivariate models confirmed the association between Waddlia IgG seropositivity and miscarriage, with ORs ranging from 4.9 to 6.2.

Waddlia seropositivity was associated with early miscarriage (p<0.001, Table 2). No difference in ethnicity was observed between those who were IgG positive for Waddlia spp. and those who were negative. Moreover, there was no difference in C. trachomatis, Chlamydophila pneumoniae, or Cp. psittaci seropositivity between women who had anti-Waddlia antibodies and those who did not, which suggests that Waddlia antibodies do not cross-react with Chlamydiaceae. Moreover, only 7 (1.6%) of 438 patients had a Parachlamydia IgG titer >64. With such a low Parachlamydia prevalence, cross-reactivity with this chlamydia-like organism is unlikely to explain the high Waddlia seroprevalence observed in the miscarriage groups.

Women who were IgG seropositive for Waddlia spp. were more likely to have had contact with animals. In a multivariate logistic regression model adjusted for age, ethnicity, and C. trachomatis serostatus, those who had had previous contact with animals were more likely to exhibit anti-Waddlia antibodies (OR 1.7, 95% CI 1.0–2.9, Figure 2). In this model, Waddlia IgG–positive serologic test results were also independently associated with age (OR 2.1, 95% CI 1.4–3.1).

This study demonstrates a strong association between the presence of W. chondrophila–specific IgG antibodies and early fetal loss. Cross-reactivity with other microorganisms seems an unlikely explanation for our results because W. chondrophila did not react with monoclonal or polyclonal antisera directed against Rickettsia, Coxiella, Wolbachia, Anaplasma, and Chlamydia spp (8,12). We did not detect any cross-reactivity of W. chondrophila with C. trachomatis, Cp. pneumoniae, and Cp. psittaci. Moreover, the molecular weights of Waddlial immunoreactive proteins obtained by Western blot are clearly different than those reported for C. trachomatis or Cp. pneumoniae (13).

With the exception of 1 patient who had IgM, only IgG antibody reactivity against W. chondrophila was observed. Because IgG antibodies may persist for years after an acute infection has resolved (3), the underlying mechanism of miscarriage due to W. chondrophila may involve reactivation of a latent asymptomatic waddlial infection, endometrial damage from a past waddlial infection, or an immune response to an epitope shared by a waddlial and fetal antigen, as proposed for C. trachomatis (3).

Further investigations are urgently needed to define how Waddlia spp. infection may be acquired. To confirm the role of W. chondrophila in miscarriage, it will be important to isolate this intracellular bacterium from miscarriage products or confirm its presence in the placenta by immunohistochemistry or PCR. This may be difficult to achieve, if, as suggested for C. trachomatis (3), W. chondrophila causes miscarriage indirectly, e.g., through increased cytokine production or molecular mimicry with fetal antigens. To our knowledge, this work provides the first evidence that W. chondrophila may be implicated in human fetal death.

Dr Baud is a physician working in the Department of Obstetrics and Gynecology of Professor Lesley Regan (London) and in the group of Gilbert Greub (Lausanne). His current research focuses on emerging infectious causes of adverse pregnancy outcomes.

We thank all midwives and doctors who participated in this study. Their involvement was essential to the whole process, and they enthusiastically gave their time to provide information and samples. We thank André Baud for computer assistance, Ludivine Pugin for technical help, and Philip E. Tarr for critical review of the manuscript.

The research of the group directed by G.G. is supported by grants from the Swiss National Science Foundation (FN3200BO-105885 and FN3200BO-116445) and COST Action 855 (European Cooperation in the field of Scientific and Technical Research).