Tuberculosis in Children and Adolescents, Taiwan, 1996–2003

Analysis of data from Taiwan’s National Tuberculosis (TB) Registry showed that incidence of TB in persons <20 years of age was 9.61/100,000 person-years, biphasic, and age-relevant, with a major peak in persons slightly >12 years. Aboriginal children were 8.1–17.4× more likely to have TB than non-Aboriginal children.

Because epidemiologic data on childhood tuberculosis (TB) are limited, we conducted a study in Taiwan to estimate the incidence of TB in children and adolescents and to characterize epidemiologic, geographic, and ethnic differences. To do this, we analyzed nationwide data obtained from Taiwan’s National TB Registration, Center for Disease Control.

Taiwan’s computer-based system for reporting cases of TB disease was established in 1996. In this system, even suspected cases of TB must be reported and registered. A diagnosis or confirmation of TB is made on the basis of clinical or laboratory findings (1). If no TB is confirmed or another diagnosis is made later, the TB registration is cancelled. To ensure compliance with the TB registration system, Taiwan’s National Health Insurance Bureau, a universal healthcare system that has insured 96% of the population since 1996, introduced 2 policies in 1997. The first was the no-notification–no-reimbursement policy, which requires that no claim would be reimbursed for the treatment of a case of TB unless it is reported. The second was the notification-fee policy, which provides an extra cash award to physicians for reporting a new case of TB (2).

Population data for Taiwan, including those regarding Aboriginal and non-Aboriginal populations, were obtained from official publications of the Ministry of the Interior (3). Age- and gender-specific notification rates (per 100,000) were then calculated based on Taiwan’s National TB Registry data and population data from 1996 through 2003.

Differences in incidences between groups were measured by the χ2 test. All reported p values were 2-tailed; p<0.05 was considered statistically significant. The strength of the associations between 2 variables was calculated by using Spearman rank order correlation. All analyses were performed with Epi Info 6.0 (available from www.cdc.gov/epiinfo/epi6/ei6dnjp.htm). 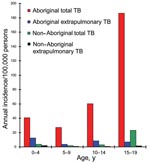 In conclusion, the overall incidence of childhood TB is 9.61/100,000 person-years in Taiwan; the incidence is also biphasic and age-relevant, with a major peak found in those just above 12 years of age. The incidence of TB in children is higher in Taiwan than in Western countries (4,5). In Western countries that do not require bacillus Calmette-Guérin (BCG) vaccination, the highest incidence of childhood TB has been reported in children <5 years of age (4,5). One possible reason for this difference may be because almost all neonates in Taiwan receive BCG vaccinations (2001, 98%) (6), which may protect children <5 years of age from TB.

Previously, higher incidences of TB cases and TB-related deaths have been reported in Aboriginal areas than in non-Aboriginal areas in Taiwan (1,7). In our study, depending on the age group, the incidence of TB among Aboriginal children was 8.1–17.4× higher than that in non-Aboriginal children. The higher incidence in this population has been attributed to their lower socioeconomic status and an inherited susceptibility (8). Aboriginal children may also be exposed to more TB in adults than other groups are or have less access to medical resources than their counterparts (1). Although BCG vaccination coverage is high in Taiwan, a lower coverage rate may still play some role in a higher incidence of TB there. Checking the coverage rates of BCG in 2 counties from 2003 through 2005, we found that although 98.5% of all children in Taiwan received BCG vaccinations, only 92.2% of the children in Aboriginal areas did. The difference was significant (p = 0.03, with 2-tailed, 2-proportional t test). Therefore, childhood TB in Aboriginal areas might be reduced if the following measures were adopted: implementing directly observed therapy for infected persons, increasing BCG vaccination coverage, and providing more accessible treatment for latent TB infection for the indigenous people in these areas.

Dr Chan is an infection control physician at the Center for Disease Control, Taiwan, and is responsible for TB control. She is also a pediatrician at the National Taiwan University Hospital, Taipei, Taiwan. Her primary research interests include the clinical epidemiology of TB, infectious diseases, and infection control.

We thank the Center for Disease Control, Taiwan, for providing us with data from Taiwan’s National TB Registration and data regarding the reporting of HIV.

Tuberculosis in Children and Adolescents, Taiwan, 1996–2003