Rickettsia typhi (prevalence 1.9%) and R. felis (prevalence 24.8%) DNA were detected in rat fleas (Xenopsylla cheopis) collected from mice on Oahu Island, Hawaii. The low prevalence of R. typhi on Oahu suggests that R. felis may be a more common cause of rickettsiosis than R. typhi in Hawaii.

Murine typhus is a febrile zoonotic disease caused by Rickettsia typhi. The classic view is that R. typhi circulates among rats (Rattus rattus or R. norvegicus) and rat fleas (Xenopsylla cheopis) (1,2), although other rodents and their ectoparasites have been implicated in maintenance of R. typhi in nature. Humans become infected when they visit disease-endemic areas infested with rats and acquire infection by inhalation or by self-inoculating infected fleas or flea feces into skin.

The most recent outbreak of murine typhus in Hawaii occurred in 2002 with 47 cases reported on 5 islands (3). Concomitantly, an increase occurred in the mouse population on the island of Maui, which reported 35 human cases. Peak occurrence of murine typhus in Hawaii was in 1944 with 186 cases reported, of which 80% occurred on the island of Oahu (4). Previous serologic surveys in Hawaii have identified antibodies reactive with R. typhi antigen in the Polynesian rat (R. exulans), black rat (R. rattus), Norway rat (R. norvegicus), and house mouse (Mus musculus) (3,4). The Indian mongoose (Herpestes auropunctatus) was also identified as a potential reservoir; however, its role has not yet been evaluated. We conducted a molecular survey of fleas in Oahu to characterize the prevalence and identity of rickettsiae in Hawaii. 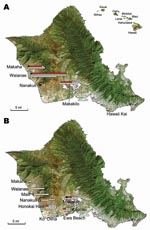 Figure. Detection of Rickettsia typhi and R. felis DNA in Xenopsylla cheopis trapped in Oahu, Hawaii, in A) 2004 and B) 2006 and 2007. Hawaii is shown in the inset. Symbols correspond...

M. musculus mice were collected during rodent population studies in the leeward and southeast parts of Oahu during the summers of 2004, 2006, and 2007 (Figure). Fleas were combed from each animal, identified as X. cheopis by using standard taxonomic keys, and kept frozen at –70°C until they were sent to the Centers for Disease Control and Prevention (Atlanta, GA, USA) for further analyses. Mice were humanely killed; only brains were removed and frozen.

DNA from 210 X. cheopis fleas was examined, including 122 fleas collected from 61 mice trapped in 2004, 84 fleas from 55 mice trapped in 2006, and 4 fleas from 2 mice trapped in 2007 (Table). Victor Tin Cat Repeating Mouse Traps (Woodstream Corp., Lititz, PA, USA) were located in 10 communities on the leeward and southeast parts of Oahu, the former representing areas where typhus cases are most frequently diagnosed on this island. The largest collections were obtained from Waianae (36.6% of flea specimens), Makakilo (20%), and Makaha (11.9%); only 1 sample each was available from Ewa Beach and Hawaii Kai. An average of 1.8 (median 1) fleas was collected from each animal.

The role of commensal rats and their fleas is often regarded as axiomatic for maintenance of murine typhus (1,2). However, other rodents and their ectoparasites have been implicated as alternative competent reservoirs and vectors of R. typhi, respectively (1,5). House mice are highly susceptible to experimental infection with R. typhi, which may establish a persistent intracerebral infection lasting for up to 5 months and is excreted in the urine (6). A previous study reported house mice naturally infected with R. typhi in the state of Georgia (7); however, no PCR-positive mice were detected in our study. Eruptions of mouse populations in the absence of rats have been implicated in several outbreaks of murine typhus (1); however, these observations were not supported by laboratory data. Early reports relied mostly on isolation of rickettsiae from tissue or fleas and serosurveys that did not necessarily provide accurate speciation of rickettsial isolates in the absence of precise molecular characteristics. Recent surveillance reports applying PCR and sequencing for detection and identification of rickettsiae have also detected R. typhi DNA in X. cheopis, Leptosylla segnis, and Ctenocephalides felis fleas in different parts of the world (2,5,8).

R. felis has been detected in many countries, primarily associated with C. felis fleas parasitizing cats, dogs, or opossums (2), although R. felis is rarely detected in cats or opossums. Surprisingly, R. felis may be present in rat fleas (X. cheopis) as demonstrated here and in a recent report from Indonesia (9). The prevalence of R. felis ranges from 5% to 45.8% for large collections of fleas, sometimes up to 100% when small collections are tested (8,10,11), and is often higher when compared with the prevalence of R. typhi, as in our study. R. felis has also been detected in Anomiopsyllus nudata collected on white-throated woodrats (Neotoma albigula) (12). Co-infection with R. felis and R. typhi in fleas has been reported only in experimentally infected fleas (13). However, it is not known if either pathogen has any advantage for acquisition, life-long persistence, or transmission by fleas.

Murine typhus caused by R. typhi has been considered to be the only rickettsiosis present in Hawaii, but our data indicate that a second flea-borne rickettsia, R. felis, circulates in areas on Oahu where murine typhus is endemic. Clinical symptoms for cat flea rickettsiosis (CFR) are not agent specific and, as for other rickettsioses, include fever, headache, and rash. Antibodies against R. felis variably cross-react with R. typhi, R. rickettsii, and other spotted fever group rickettsia antigens (14). Consequently, R. felis infection in humans can be misdiagnosed or missed without R. felis antigen testing. Only a handful of cases of CFR have been reported worldwide, and only 8 cases have been specifically confirmed by PCR (14,15). The Hawaii State Department of Health reported a mean of 4.2 cases annually from 1992 through 2001 and a mean of 20 cases annually through 2006, but an outbreak of 47 cases occurred in 2002 (3). Because all cases of murine typhus in Hawaii were diagnosed by using potentially cross-group reactive serologic tests and not specific molecular or serologic tests, it is difficult to exclude or confirm if humans have CFR or what the relative prevalence of the 2 rickettsial diseases may be in Hawaii.

Since 25% of the fleas removed from mice were positive for only R. felis DNA, this pathogen may pose a serious risk to human health in Oahu. Further studies are warranted to establish the true human prevalence of murine typhus and cat flea rickettsiosis in Hawaii, to define the clinical spectrum of these infections with more specific confirmatory diagnostic tests, and to establish the role of fleas and different rodents in the epidemiology of the 2 diseases.

Dr Eremeeva is a research microbiologist at the Centers for Disease Control and Prevention. Her primary research interests are molecular diagnosis and molecular epidemiology of rickettsial diseases.

We thank Gregory A. Dasch for helpful discussions and review of the manuscript, and Yamitzel Zaldivar and Ashley M. Williams for help in setting up PCR testing.

This research was supported in part by an appointment of S.E.K. and M.M.S. to the Emerging Infectious Diseases Fellowship Program administered by the Association of Public Health Laboratories and funded by the Centers for Disease Control and Prevention.