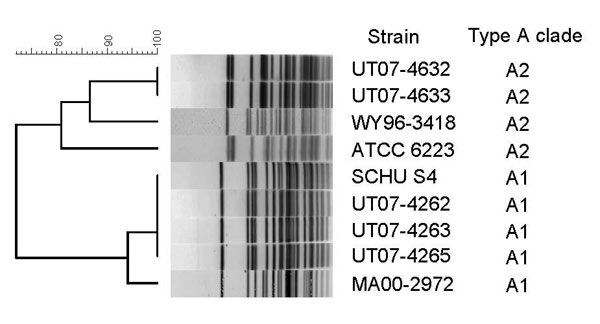 Figure 1. Dendrogram based on PmeI pulsed-field gel electrophoresis (PFGE) patterns of Francisella tularensis type A isolates. The dendrogram was constructed by using Dice similarity coefficients (1.5% optimization and 1.5% tolerance) and unweighted pair group method with averages. Strains WY96–3418, ATCC 6223, SCHU S4, and MA00–2972 were included as known A1 and A2 controls for creation of the dendrogram. Control strains were previously identified as either A1 or A2 by multiple methods including multilocus variable number tandem repeat analysis, PFGE, housekeeping gene sequence analysis, whole genome sequencing, and Indel analysis (1,2,4–7,9).