Molecular characterization of methicillin-resistant Staphylococcus aureus (MRSA) strains different from those of an endemic healthcare-associated clone was conducted over 13 years in Geneva, Switzerland. We demonstrated strain diversity, including clones rarely found in Europe. Local epidemiology of community-associated MRSA is diverse and is evolving by importation and transmission of new strains.

Community-associated methicillin-resistant Staphylococcus aureus (CA-MRSA) is responsible for severe infections related to carriage of exotoxins such as the Panton-Valentine leukocidin (PVL), toxic shock syndrome toxin 1 (TSST-1), or exfoliatin A (1). Genetic content of CA-MRSA strains depends on the local epidemiology and was recently described as polyclonal (2) Another study reported more uniformity in CA-MRSA lineages (3). We have recently evaluated prevalence of MRSA at hospital admission and showed a low CA-MRSA prevalence, a reservoir of asymptomatic carriers, and a high degree of CA-MRSA diversity (2). However, despite an increasing number of CA-MRSA infections in Europe (4), few, if any, studies have assessed long-term epidemiology of CA-MRSA in a geographically confined area. Awareness of secular trends in molecular features of CA-MRSA could affect public health and patient care. Therefore, our aim was to evaluate genetic diversity and spread of non–multidrug-resistant MRSA strains isolated in Geneva over a 13-year period.

We selected 2 collections of strains with 151 nonduplicated MRSA isolates identified in patients or carriers treated at our institution. The first collection was from a retrospective review of laboratory records and included non–multidrug-resistant (gentamicin- and ciprofloxacin-susceptible) strains collected during 1993–2002 that had a phenotype different from the endemic healthcare-associated MRSA (HA-MRSA) strain in Geneva. The prevalent HA-MRSA clone in Geneva is sequence type (ST) 228-MRSA-I (CC5), which shows resistance to gentamicin, ciprofloxacin, clindamycin, and erythromycin. HA-MRSA strain ST8-MRSA-IV has been sporadically introduced from France. This strain has the same phenotype as ST228-MRSA-I (CC5) except for its susceptibility to gentamicin (5). We included all strains resistant to or with intermediate susceptibility to fusidic acid, a characteristic of many CA-MRSA isolates in Europe.

The second collection was isolates selected from patients prospectively identified as colonized or infected with CA-MRSA by the CA-MRSA surveillance program during 2003–2005 (6). CA-MRSA was defined as any isolate with an antimicrobial drug resistance profile different from the strain endemic in the Geneva healthcare setting and diagnosed in a patient without a history of hospitalization in the previous 12 months.

Since late 2002, all patient demographic and epidemiologic data have been reviewed and recorded on a standardized form by a public health nurse (6). For this analysis, we included only those patients who were seen at our institution or outpatient clinic.

Table 1 shows that most CA-MRSA strains isolated during 2002–2005 were associated with skin and soft tissue infections. Most cases of infection or colonization were associated with migration or travel history. Four healthcare workers acquired CA-MRSA strains epidemiologically unrelated to each other. In 2 instances, family members of these workers were also affected.

Strains were rarely resistant to clindamycin (5%), gentamicin (8% only in isolates recovered after 2002), or rifampicin (<1%). Susceptibility to cotrimoxazole was 89% during the first period and 100% during the second period. PVL-positive isolates remained multidrug susceptible throughout the study period, and were distinct from our endemic nosocomial strain. 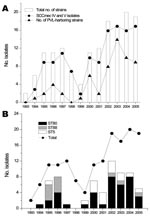 From 1994 through 1999, we identified 14 PVL-positive MRSA isolates. The Figure, panel B, shows that CA-MRSA identified during 1993–2002 consisted mainly of 3 clonotypes (ST80, ST88, and ST5). After 2002, these strains were less frequent and the proportion of other clonotypes increased. 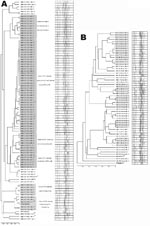 Several epidemiologically linked cases were identified in the second period (Appendix Figure: a cluster of 6 family members with recurrent furunculosis over 5 years (ST80-MRSA-IV), 4 smaller family clusters with the same clone, and 3 family clusters with other clonally related strains (ST5-MRSA-IV, ST59-MRSA-V, ST1-MRSA-V). Two inmates incarcerated in the same cell of the Geneva prison had abscesses caused by the ST8-MRSA-IV (USA300) strain. One outbreak involved 5 neonates and 2 mothers colonized or infected with ST5-MRSA-IV harboring the PVL gene (5). We also observed a cluster of 5 patients from Kosovo infected or colonized with a PVL-producing strain (ST152-MRSA-V) resistant to gentamicin and amikacin.

Strains lacking toxins (Appendix Figure, panel B) showed a wide diversity of patterns. Most isolates (n = 33) were obtained from the first stain collection and showed many different genetic backgrounds (n = 21).

We studied 2 collections of non-multiresistant MRSA strains identified over a 13-year period at our institution. Our analysis showed that sporadic PVL-positive CA-MRSA has been isolated in Geneva since 1994; the largest cluster corresponded to ST 80 (SCCmec IV, PVL positive); the PVL gene is disseminated in many genetic backgrounds; strains showed diversity of genomic content; several epidemiologic clusters were identified; and many cases were linked to migration and travel.

Our data showed that resistance to fusidic acid or susceptibility to gentamicin should not be used as phenotypic criteria for CA-MRSA in Europe. For example, gentamicin-resistant ST152-MRSA-V found in 5 patients from Kosovo is common.

The number of genetic profiles identified appears particularly high, which is similar to profiles described in European countries, northern Africa, Oceania, and the Americas. In contrast to CA-MRSA epidemiology described as homogeneous in Australia (13), some parts of the United States (14), or Sweden (15), our local epidemiology appears more heterogeneous.

Our study has limitations. First, we used 2 strain collections. The collection obtained before 2003 may have omitted gentamicin-resistant CA-MRSA strains (e.g., ST152). Second, retrospective case ascertainment does not distinguish invasive from colonizing strains in all patients. Finally, we cannot exclude detection bias caused by our active MRSA screening policy (6,7).

Dr Francois works in the Genomic Research Laboratory at Geneva University Hospitals. His primary research interests are mechanisms of S. aureus pathogenicity and technology transfer of molecular assays for rapid identification and genotyping of MRSA.

We thank Philippe Sudre, Roberta Pastore, and Martine Girard for their support, and all members of the Geneva CA-MRSA Task Force for this collaborative effort uniting microbiologists and epidemiologists.