We report the autopsy findings for a 45-year-old man with polyradiculoneuropathy and fatal acute disseminated encephalomyelitis after having Mycoplasma pneumoniae pneumonia. M. pneumoniae antigens were demonstrated by immunohistochemical analysis of brain tissue, indicating neuroinvasion as an additional pathogenetic mechanism in central neurologic complications of M. pneumoniae infection.

A 45-year-old, previously healthy man had fever, pain in the extremities, nasal discharge, and cough with nonpurulent sputum. He sought clinical care 1 week after onset of illness because of his deteriorating general state, including a headache and paresthesias in both hands. Bilateral basal pneumonia was diagnosed and treated with clarithromycin. During the ensuing 4 days, a rapidly ascending polyradiculoneuropathy resulted in tetraparesis, followed by facial palsy, ophthalmoplegia, and then paralysis of all cranial nerves. The initially fully alert patient became comatose, and assisted respiration was necessary.

A computed tomographic scan on day 15 showed brain edema and multiple inflammatory/demyelination lesions in the subcortical white matter of both hemispheres and within the brain thalami, capsulae internae, midbrain, and pons. Electroneurographic and myographic results showed a severe form of a peripheral axonal neuropathy. No anti-gangliosid (GM) 1 or anti-GM2 antibodies were found in the patient’s serum on day 12. We did not look for GQ1b antibodies.

The clinical diagnosis was polyradiculoneuropathy (atypical Guillain-Barré syndrome) and acute encephalitis as complications of bilateral pneumonia caused by M. pneumoniae. In addition to clarithromycin, the patient received amoxicillin and ceftriaxone and was given Ig (0.4 g/kg bodyweight/day for 5 days). He died of intractable cerebral edema on day 17 of illness, 10 days after the onset of neurologic symptoms.

At autopsy, the brain was edematous, weighing 1,560 g. The cerebral meninges were macroscopically unconspicuous. On sectioning, multiple hemorrhagic foci with diameters from 0.5 mm to 2 mm were seen within the white matter of the cerebral and cerebellar hemispheres, the brainstem, and also sparsely within the cortex and basal ganglia. There were mild bilateral basal bronchopneumonia and mild hepatic steatosis. 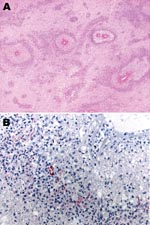 Microscopically, most of the hemorrhagic foci in the brain consisted of fibrinoid necrosis of the wall of small veins, surrounded by hemorrhagic parenchymal necrosis and a dense annular infiltrate of neutrophils and macrophages (Figure). In less disease-advanced areas, zones of acute perivascular periaxial demyelination were seen around intact vessels; within these same areas, a few vessels were associated with a sleevelike infiltrate of T lymphocytes and macrophages with no evidence of demyelination or necrosis, which probably represented an earlier stage of the process.

Multiple levels of the spinal cord had undergone near total necrosis, extending focally into the spinal nerve roots. Perivascular lesions, as observed in the brain, were also present, albeit in smaller numbers. The spinal meninges were focally occupied by a granulocytic infiltrate. Many meningeal vessels were occluded by fresh thrombi. Tissue samples of the anterior and posterior spinal nerve roots, spinal ganglia, sciatic nerve, and brachial plexus showed acute widespread demyelination, with a dense infiltrate of CD68-positive macrophages and a mild perivascular infiltrate of T lymphocytes and plasma cells.

Neurologic disease is a well-known extrapulmonary complication of M. pneumoniae infection (1,2), manifesting as meningoencephalitis, cerebellar ataxia (3), brainstem disease (4), transverse myelitis (5), polyradiculitis (4,6), or cranial nerve palsies (4,6). Our findings and previous anatomopathologic reports (4,6–8) support the generally held view that central neurologic complications are the result of disseminated acute encephalomyelitis (ADEM) or of Hurst syndrome, regarded as a hyperacute variant of ADEM. Congestion and edema of the brain, widespread perivenous demyelination mainly in the cerebral and cerebellar white matter, basal ganglia, brainstem, and spinal cord, and in severe cases, necrosis of vessels and perivascular tissue are the histologic characteristics. Rarely, the demyelinating process extends into spinal nerve roots and peripheral nerves.

The pathogenesis of this syndrome is not fully elucidated. An infection-induced, autoimmune hypersensitivity reaction to myelin proteins is the most frequently advanced hypothesis, suggested by the morphologic similarity to experimental allergic encephalitis and the interval between onset of infection and beginning of neurologic symptoms. A T-cell–mediated, delayed type, hypersensitivity reaction, possibly accompanied by an immune-complex type vasculitis (4), seems most probable. The occasional demonstration of circulating antibodies against neural tissue supports this hypothesis. Necrosis of the spinal cord found at autopsy in our patient was probably due to secondary ischemia caused by edema and vascular thrombosis, and a similar process may be responsible for the permanent paraplegia of other reported patients with transverse myelitis after M. pneumoniae infection (5,6).

In recent years, the additional or alternative role of invasion of the CNS by the organism itself has gained renewed interest. M. pneumoniae RNA can be detected in brain tissue by nucleic acid hybridization (8), and the presence of the organism was demonstrated in cerebrospinal fluid by PCR (1,9–12) and by culture (3,12). As shown in our case, the microbial antigens can be immunohistochemically detected in histopathologically involved areas of the CNS, both in brain biopsy specimens and at autopsy.

Narita et al. searched for M. pneumoniae by PCR in the cerebrospinal fluid of 32 patients; all were <15 years and had meningitis, encephalitis, or meningoencephalitis after M. pneumoniae infection. Positive results were found in 16 of 32 patients. Of the 16 positive results, 15 were seen in samples from 23 patients who had neurologic complications within 7 days after onset of infection, whereas the search was positive in only 1 of the 9 remaining patients with late onset of neurologic complications (11,13). Bitnun et al. draw a similar conclusion in their review of childhood encephalitis and M. pneumoniae, stating that “direct invasion of the CNS is the probable pathogenetic mechanism in children with a brief (<5 days) duration of the prodromal illness” (9). In our patient, neurologic symptoms started 7 days after onset of illness.

The organism is likely present, at least in some patients, in the CNS of those who have an early onset of neurologic complications. To assess its pathogenetic role is difficult. The organism may either cause direct damage or trigger a more violent immunologic reaction. Treatment should in that case aim at arriving rapidly at a sufficient concentration of effective antimicrobial agents within the CNS. The fact that neuroinvasion is more prevalent in patients who have an early onset neurologic complications may also relate to necrosis of vessels, a feature of rapidly progressing disease, which may be caused by or facilitate microbial invasion. Prevention, diagnosis, and treatment of neurologic complications in mycoplasmal infections still pose many problems. Immunohistochemistry may contribute to a better understanding of the pathogenesis of the disease and provide insights on clinical management of patients.

Dr Stamm is a general pathologist and head of the Pathology Department at Kantonsspital Aarau since 1990. He is also a professor of pathology at the University of Zürich, Switzerland. His special interests include the pathology of infectious diseases and of the digestive tract.