Multiple sublineages of highly pathogenic avian influenza (HPAI) virus (H5N1) have been detected from poultry in Vietnam since 2001 (1–3). However, the introduction of subtype H5N1 genotype Z virus in 2003 resulted in unprecedented widespread outbreaks in poultry and repeated interspecies transmission to humans; 93 cases were confirmed in Vietnam by the end of November 2005 (4,5). These viruses became endemic in poultry in Vietnam, causing repeated outbreaks, and have been transmitted to other Southeast Asian countries, where they have caused poultry outbreaks and human infections (3–6). This virus is designated as clade 1 in the World Health Organization (WHO) influenza (H5N1) virus nomenclature system (7). In 2005 a novel reassortant virus of subtype H5N1 (genotype G) from clade 2.3.2 (Mixed/VNM2) was also recognized in Vietnam (2). The close phylogenetic relationship of the influenza virus (H5N1) lineages in Vietnam and the southern People’s Republic of China suggests repeated introduction of subtype H5N1 virus into Vietnam (2,3,8). However, the development and evolution of influenza virus (H5N1) in Vietnam since 2005 are not clear.

Since 2003, multiple sublineages of the Goose/Guangdong/1/96 (Gs/GD)–like virus became established in poultry in China (2). However, in late 2005, clade 2.3.4 (Fujian-like) influenza virus (H5N1) became dominant and replaced almost all of these previously circulating sublineages; these sublineages have also been been detected in wild birds in Hong Kong Special Administrative Region (SAR), China, and from poultry in Lao People’s Democratic Republic, Malaysia, and Thailand (3). Vaccination of poultry in Vietnam against H5 virus was initiated in October 2005. After that, no influenza (H5N1) outbreaks were reported in the country from December 2005 to October 2006 (9). However, renewed subtype H5N1 outbreaks in poultry have occurred in Vietnam since November 2006, with evidence of limited human infections during 2007 and 2008. Whether clade 2.3.4 viruses have been introduced into Vietnam is not known. 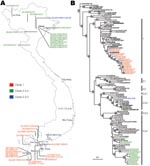 We sequenced the whole genomes of 33 avian influenza virus (H5N1) isolates collected during poultry outbreaks in Vietnam from October 2005 through May 2007. All sequences that were generated in this study have been deposited in GenBank (CY029508–CY029771). The virus was primarily detected in aquatic poultry (ducks, muskovy ducks), but it was also isolated from 2 chickens in December 2006 and January 2007. The date and location of virus isolation are summarized in the Table and Figure 1, panel A.

To understand the developments of influenza virus (H5N1) in Vietnam, we characterized all 8 gene segments of these 33 viral isolates and phylogenetically analyzed them with all available influenza virus (H5N1) previously isolated from Vietnam, Thailand, Malaysia, Lao People’s Democratic Republic, and southern China and with reference viruses belonging to each of the designated clades of the WHO influenza (H5N1) nomenclature system. Sequence assembly, editing, multiple sequence alignment, neighbor-joining, and Bayesian phylogenetic analyses were conducted as previously described (3). Maximum-likelihood trees were constructed by using Garli version 9.04 (10).

The hemagglutinin (HA) genes of all 33 Vietnam isolates were derived from the Gs/GD-like lineage; however, they fell into 3 distinct sublineages (Figure 1, panel B). Seventeen of 33 isolates analyzed were clade 1; however, 15 isolates between March and May 2007 belonged to clade 2.3.4. A single virus isolated in February 2006 (Muscovy duck/Vietnam/1455/2006) clustered within clade 2.3.2.

Phylogenetic analyses also showed a geographic distinction among the isolates characterized in this study. Isolates from samples taken in the northern provinces of Vietnam belonged to clades 2.3.2 and 2.3.4, whereas all isolates in the southern provinces of Vietnam were clade 1 (Figure 1). The clade 1 viruses isolated in the southern provinces from October 2005 through January 2007 were most closely related to viral isolates from poultry in Cambodia in the same period. When one considers the shared land border between Cambodia and southern Vietnam, the close relatedness of these viruses is reasonable. Two of the human influenza (H5N1) cases that were detected from Cambodia were located near the Vietnam-Cambodia border region (11). The genetic similarity of strains of influenza virus (H5N1) in Cambodia and southern Vietnam have been observed since 2004 (4). 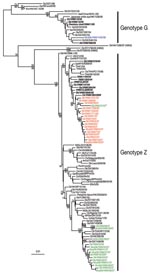 Figure 2. Phylogenetic relationship of the polymerase basic 2 (PB2) gene of influenza A viruses isolated in Vietnam from 2006 to 2007. Numbers above and below branches indicate neighbor-joining and Bayesian posterior probabilities,...

Phylogenetic analyses of the neuraminidase gene and all internal gene segments (data not shown) show that while most of the isolates were genotype Z viruses, they also formed distinct groups that were broadly similar to the evolutionary relationships seen in the HA tree. Duck/Vietnam/37/2007, which belongs to clade 2.3.4, shared the internal gene constellation of clade 1 viruses (Figure 2), providing evidence for cocirculation of these virus groups and evidence of reassortment between different sublineages within Vietnam influenza (H5N1) isolates. A single influenza (H5N1) genotype G virus (Muscovy duck/Vietnam/1455/2006) was also identified in February 2006, which indicates that genotype G viruses may be persistent in poultry in Vietnam (Figure 2). These results confirm that the genetic diversity of strains of influenza virus (H5N1) in Vietnam is similar to that in southern China during the same period (3).

The motif of multiple basic amino acids at the HA cleavage site that is characteristic of HPAI was maintained in all viruses characterized; however, clade-specific mutations were observed in different sublineages, consistent with previous reports (3,4,8,12). The receptor-binding pocket of HA1 retains Gln 222 and Gly 224 (H5 numbering), which preferentially binds avian-like α2,3-NeuAcGal linkages. However, all 12 clade 2.3.4 viruses and the single clade 2.3.2 virus have an Arg-212-Lys mutation in the HA, whereas 12 clade 1 viruses (marked on Figure 1) have a Ser-123-Pro mutation, previously reported from a Vietnam influenza (H5N1) human isolate (8), which has been associated with receptor binding. The importance of this change is not clear (13,14).

Mutations in the Matrix protein 2 ion channel associated with amantadine resistance were detected in all clade 1 virus isolates tested. These viral strains retained the dual mutations Leu26Ile and Ser30Asn in the M2 protein similar to previous clade 1 strains (15). No mutation associated with amantadine resistance was recognized in those clade 2.3.2 and clade 2.3.4 strains except the reassortant Dk/VNM/37/07, which had an additional Val-27-Ala mutation in the M2 protein. Thus we recorded an HPAI (H5N1) virus strain with a triple mutation associated with amantadine resistance. All viruses characterized do not have mutations in the NA gene that confer resistance to oseltamivir. Other known virulence mutations, including at polymerase basic protein 2 position 627, were not present in any of the viruses characterized.

This study confirms that clade 2.3.4 virus sublineages that are dominant in southern China have now spread to northern Vietnam (3). These viruses appear to have replaced the clade 1 viruses in northern Vietnam just as previous influenza (H5N1) sublineages were replaced in southern China (3); however, clade 1 viruses are still detected in the southern provinces of Vietnam. It is, therefore, possible that the clade 1 viruses in southern Vietnam may eventually be replaced by clade 2.3.4. The availability of extensive genetic data from southern China enables us to recognize the development of influenza virus (H5N1) in Vietnam and indicates that clade 2.3.4 viruses may have been introduced into Vietnam on multiple occasions. However, because systematic surveillance data are lacking, determining the interaction of viruses between the northern and southern provinces of Vietnam, and also between different countries in Southeast Asia, is not possible. When one considers that multiple sublineages of influenza virus (H5N1) are simultaneously endemic to Southeast Asia, systematic surveillance in poultry remains essential to understand the further evolution of this subtype in this region and the potential for pandemic emergence, as well as to monitor the efficacy and cross-protection of poultry vaccines.

Dr T.D. Nguyen has been the head of the Department of Virology in the National Institute of Veterinary Research since 1988. His research interests include viral diseases of poultry and swine.

We thank the Department of Animal Health of Vietnam for providing some of the viruses used in this study.

This study was supported by the Research Grants Council (HKU1/05C) of the Hong Kong SAR government, the Li Ka-Shing Foundation, the National Institutes of Health (NIAID contract HHSN266200700005C), and the Ministry of Agriculture and Rural Development of Vietnam. G.J.D.S. is supported by a career development award under NIAID contract HHSN266200700005C.