Enterohemorrhagic Escherichia coli (EHEC) strains are a highly pathogenic subgroup of Shiga toxin–producing E. coli (STEC) that cause severe human diseases, including bloody diarrhea and hemolytic uremic syndrome (HUS) (1). The ability to cause severe human disease differentiates EHEC from other STEC found in the environment that are less pathogenic or nonpathogenic. E. coli O157:H7 is the most frequent EHEC implicated as a cause of HUS (2), but non–O157:H7 EHEC are variably present as the only pathogens in stools from HUS patients (1,3,4).

A recent phylogenetic analysis of E. coli isolated from humans and animals in different geographic areas by multilocus sequence typing (MLST), the current standard for phylogenetic analyses of bacteria, indicated extensive allelic variations and homolog recombinations in pathogenic lineages and demonstrated repeated and independent evolution of pathogenic strains (5,6). However, only a limited number of EHEC associated with HUS have been so investigated. Therefore, we performed a comprehensive MLST-based examination of the molecular phylogeny of EHEC isolated from HUS patients and established a collection of representative HUS-associated enterohemorrhagic E. coli (HUSEC) (www.ehec.org). 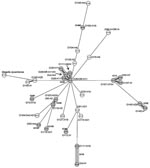 From 1996 through 2006, 524 EHEC were isolated as the only pathogens from fecal samples of epidemiologically unrelated patients with HUS (1 strain per patient). The isolation was achieved by using previously described procedures (7). The isolates were confirmed as E. coli by API 20 E (bioMérieux, Marcy l’Etoile, France) and serotyped (8) by using antisera against E. coli O antigens 1–181 and H antigens 1–56. In all nonmotile isolates from serogroups O26, O103, O111, O145, and O157, fliC genes were genotyped (9,10). MLST was performed as described previously (6) with small modifications (11). Phylogenetic analyses were based on allelic data that used the BURST algorithm (12) to achieve a more robust interpretation of the clustering and to reduce the influences by the effects of the recombination, which are widespread in E. coli (6). In addition, the stringent definition of clonal complexes (CCs), with which strains sharing at least 6 identical alleles are grouped into the same CC, was applied. The minimum spanning tree was generated from the allelic profiles by using Shigella dysenteriae strain M1354 (ST243, by using data from http://web.mpiib-berlin.mpg.de/mlst/dbs/Ecoli) as outgroup ( Appendix Figure).

The most frequent serotypes including O26:H11/H–, O103:H2/H–, O111:H8/H–, and O145:H28/H– clustered into the 5 most prevalent STs (Table 1). However, not all isolates of the same serotype always belonged to the same ST (Table 1). One example is serotype O26:H11/H– (fliCH11), which was the most common non–O157 EHEC associated with HUS and clustered into 4 STs as single-locus variants (Table 1). Each of four O rough (OR) strains (2 OR:H11, and 1 each OR:H2 and OR:H–), none of which could be successfully serotyped, was matched by its ST to an O typeable strain, indicating a recent conversion from the smooth to the rough strain form.

The combination of MLST analysis and serotyping enabled us to establish the HUSEC collection. This collection comprises 41 EHEC isolated from HUS patients in Germany, which includes all 36 EHEC serotypes (O157 and non-O157) isolated from HUS patients and all 31 STs identified within these serotypes (Table 2). The strains included in this HUSEC collection were reserotyped and characterized for their stx genotypes and the presence of the eae gene (Table 2). Phenotypic characteristics and additional properties such as putative virulence determinants are available at www.EHEC.org.

Most (81.1%) of the non-O157 EHEC clustered into 3 CCs and belonged to a limited number of serotypes. These strains were recovered independently from different regions in Germany over an 11-year period. For the remaining strains, epidemiologic support is not as strong, and the clonal analysis demonstrated that their chromosomal backgrounds are highly divergent from those of CC29, CC32, and CC20. In 14 STs, we have only 1 isolate. In these cases, excluding concurrent or recent infection by E. coli O157 serologically is even more important. This exclusion was not always possible because patients’ serum for the investigation of immunoglobulin M anti-O157 lipopolysaccharide antibodies is frequently not available. However, at least some of these strains might represent emerging clones in the human population, such as O111:H10 (10), O113:H21 (14), and O121:H19 (15). Thus, strains of these serotypes included in our HUSEC collection can be used in future studies as a reference to compare EHEC isolated in other countries from HUS patients. This would allow timely discovery of the emergence of new non-O157 clones associated with HUS and the virulence traits that they contain (www.ehec.org).

Dr Mellmann is a consultant for hygiene and infectious diseases at the University Hospital Münster. His professional interests include molecular identification and epidemiology of EHEC and other bacterial pathogens.

We are grateful to Phillip I. Tarr for extensive discussions of the manuscript.

This study was supported by grants from the Federal Ministry of Education and Research Network Zoonoses and the Network European Research ERA–NET PathoGenoMics.