A total of 161 cases of cutaneous leishmaniasis caused by Leishmania tropica occurred in the Jerusalem district during 2004–2005; 127 (79%) cases were in a town just outside Jerusalem. Environmental models suggest that in the context of global warming, this outbreak has the potential to extend into Jerusalem.

Leishmaniasis is a zoonotic infection in which parasites of the genus Leishmania are transmitted from rodents and small mammals to Phlebotomus species sandfly vectors. Humans may inadvertently enter the zoonotic cycle and contract cutaneous leishmaniasis (CL). This disease manifests as a chronic ulcer, potentially leaving unattractive scars.

CL incidence throughout the 1990s remained at a relatively stable 0.5–2.5 cases/100,000 (1). Leishmania major is found in low-lying arid and semiarid deserts and has been responsible for most cases in Israel (2). L. tropica, typically anthroponotic, is more common in suburbs and villages, although in hilly rural areas, mammals may act as reservoirs (3). The sandfly Phlebotomus papatasi is vectorially competent for L. major only (4), and Ph. sergenti is specific for L. tropica (5). Sandflies are usually found within 200 m of their source.

Since the 1990s, L. tropica, either alone or in conjunction with L. major, has been implicated in several outbreaks of CL in the western regions of the Jordan Valley (6). We report a large outbreak of CL caused by L. tropica in a town on the outskirts of Jerusalem.

Jerusalem is located atop the Judean Hills, on the edge of the Judean Desert. The desert drops off steeply to the east, falling 1,200 m over a course of 20 km to a nadir of –400 m on the shores of the Dead Sea, the lowest point on land on Earth. On the edge of this region is Ma’ale Adumim, 5 km east of Jerusalem (population ≈33,000). The town is built along narrow ridges that fall away to deep ravines inhabited by wildlife. Houses on the periphery are often just meters from desert crags and crevices; none is more than 500 m from the wilderness.

All cases of leishmaniasis in Israel are required to be reported to the district health office, and a weekly national report is published by the Department of Epidemiology, Israeli Ministry of Health (7). We confirmed suspected cases by using stained smears, culture, or serologic analysis. Cases were plotted on the Ministry of Health geographic information system (Environmental Systems Research Institute, Redlands, CA, USA), adapted specifically for the Informatics and Computation Division of the Ministry of Health (Systematics Technologies Ltd., Tel Aviv, Israel). National population data were derived from the Israeli Central Bureau of Statistics. Local population data were supplied by the town municipality, and neighborhood incidence rates were derived and averaged for 2004–2005. Patients were interviewed by using a standardized national CL questionnaire (Technical Appendix). Simple rate ratios (RRs) were calculated where applicable. 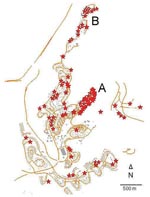 Figure 2. Geographic distribution of cutaneous leishmaniasis cases in Ma'ale Adumim, Israel, 2004–2005. Each star represents 1 case. In dense areas, some marks may be missing because of technical limitations. Wilderness ravines (white...

Age distribution of patients was not different from that of uninfected persons in the town (Table). More than one third of the patients (37.5%) reported a family member who was infected with CL in the same period. Most patients (62.2%) had >1 lesion, 70% reported having a private garden, 57.1% lived adjacent to public parks, 52.7% had a home that faced a wilderness area, 45.8% reported a construction site near their home, and 65.1% had intact insect screens on their windows. Eight patients (14%) (6 in neighborhood A and 2 in neighborhood B) reported seeing hyraxes near their homes (Figure 2).

We report a large outbreak of CL in Israel caused by L. tropica that was centered on a town just outside Jerusalem. This outbreak was observed in the context of increasing rates of CL in Israel. During the outbreak, highly visible environmental intervention and active surveillance were undertaken, which may have introduced detection bias, but it is unlikely that these alone could explain the dramatic increase in incidence.

The association between CL outbreaks and urban development has been noted repeatedly, and construction waste and soil humidity are considered intermediaries (8,9). A study in Colombia found that habitat degradation negatively affected phlebotomine populations but that medically important sandfly species were able to exploit modified environments (10). Ma’ale Adumim has undergone rapid development and expansion over the past decade, and sandflies are abundant in the area. A 2005 study collected 80,000 sandflies near the town, of which 85% were Ph. sergenti (11), the vector for L. tropica. Hyraxes were sighted most frequently in the worst CL-affected neighborhoods. Although environmental investigation is ongoing, we suspect that hyraxes infesting building sites were the source of this outbreak. This hypothesis is in accordance with current knowledge that associates L. tropica with urban outbreaks and hilly terrain. However, the pattern of this outbreak supports a zoonotic rather than anthroponotic source.

In 2006, Chaves and Pascual reported that climate was a valuable covariate in predicting incidence of CL (12). A 1996 computerized model examined the effect of warming of 1°C, 3°C, and 5°C on the likelihood of CL transmission at 115 southwest Asian sites. Sandflies are not known to reproduce in Jerusalem, but Cross and Hyams suggest that Jerusalem could support endemic transmission if the average temperature increased by 1°C (13). Since that model was proposed, the average temperature in Jerusalem has increased by ≈1°C (14). The spate of recent outbreaks suggests that L. tropica is no longer an emerging pathogen but rather that it is an established pathogen in Israel. The proximity of the outbreak to Jerusalem, in light of the trend toward global warming (15), makes an outbreak of CL in Jerusalem a real and disturbing prospect.

Dr Singer is a public health specialist at the Jerusalem district health office. His research interests include epidemiology, health policy, and the cost/utility of alternative medical practices.

We thank Laor Orshan, David Enk, Charles L. Jaffe, the Ministry of Environmental Protection, and the physicians and nurses in the Ma’aleh Adumim Municipality Community for their invaluable assistance.