During a study to extend our knowledge of the host range and genetic diversity of arenaviruses in Great Britain, 66 of 1,147 rodent blood samples tested for antibody, and 127 of 482 tested by PCR, were found positive. All sequences most closely resembled those of previously identified lymphocytic choriomeningitis virus.

Viruses in the family Arenaviridae are separated into 2 distinct serocomplexes, the New World serocomplex and the Old World serocomplex (1). Several arenavirus species are known to cause human disease, including lymphocytic choriomeningitis virus (LCMV), which causes influenza-like clinical signs, occasionally with neurologic complications. Infection may be asymptomatic in up to one third of patients (2), and serious complications often occur in intrauterine infection (3). Less severe cases of adult human infection are likely underreported and often misdiagnosed (4).

LCMV is found worldwide, probably because of its association with its natural Old World host, the house mouse, Mus musculus (5). Although antibodies have also been detected in other rodent species (6,7), arenaviruses are known to be serologically cross-reactive. Few isolates of LCMV have been obtained from wild rodents so little is known about its genetic diversity. Recent studies on American arenaviruses found that diverse arenaviruses co-evolved with their rodent hosts (8), a finding that suggests that a more thorough study of European rodents might also identify novel arenaviruses. The purpose of this study was therefore to extend our knowledge of LCMV and LCMV-like arenaviruses in rodents in Great Britain.

Serum samples were separated by centrifugation (10,000 rpm, 10 min) and tested for LCMV antibody by using the manufacturer’s protocol for commercial indirect fluorescent antibody assay slides (Charles River Laboratories, Wilmington, MA, USA). A 1:40 dilution of anti-rat or anti-mouse immunoglobulin G fluorescein isothiocyanate (Sigma-Aldrich, Gillingham, UK) or a combination of both were used as secondary antibody. Ninety-three serum samples (from the original serum samples tested for antibody) that were either antibody positive or from sites with high seroprevalence were tested for arenavirus RNA by PCR. Another 379 blood samples from the captive colony of house mice, which had not been previously tested for antibody, were also tested. The PCR targeted a fragment of the glycoprotein precursor gene (GPC) (10). A selection of samples found negative by the GPC PCR were subsequently retested by PCR targeted at a fragment of the nucleoprotein (N) gene (8), by using primers to sequences common to the Old World arenaviruses. Total RNA was extracted by using QIAamp viral RNA mini-kit (QIAGEN, Crawley, UK), converted to cDNA, and amplified by using a single-step kit (Superscript III one-step RT-PCR with Platinum Taq polymerase system; Invitrogen, Paisley, UK) in conjunction with oligonucleotides arena1+ and LCMV322– (10) or 1010C and either OW1696R or NW1696R (8). Products were separated and visualized by agarose gel electrophoresis, and amplicons were purified with the QIAquick PCR purification kit (QIAGEN). Bidirectional sequencing was performed off-site (MWG Biotech AG, Ebersberg, Germany). The 97-nt sequences generated here were deposited with GenBank (accession nos. DQ275199–DQ275295).

The software package MEGA version 4.0 (11) was used to construct an alignment of a 283-nt fragment of the GPC gene nucleotide sequences and predicted amino acid sequences, and for phylogenetic analysis with the neighbor-joining method (p distance model), with bootstrap support based on 1,000 pseudoreplicates. Other GenBank sequences included for comparison are listed in Table 2. Pairwise genetic distances were calculated by using the p distance model; percentage sequence identities were calculated by subtracting the genetic distances from 1.0 and multiplying by 100.

Overall, 66 of 1,147 serum samples and 7 of 9 rodent species had antibodies to arenaviruses. Sciurus vulgaris had the highest prevalence, 26%, although only 15 squirrels were tested. M. musculus had the second highest prevalence, 17.5%. Antibodies were also detected in Apodemus sylvaticus, Microtus agrestis, Micromys minutis, captive-housed Cynomys ludovicianus, and Rattus norvegicus. Seroprevalence varied between species (1.4%–26%) and between sites (0%–50%) (Table 1).

GPC PCR amplicons were obtained from 127 of 472 tested samples, and sequences were determined for 97 samples (Table 1). All positive samples were from Mus musculus except 1 from A. sylvaticus. Twenty samples negative in the GPC PCR, but seropositive or from high prevalence sites, were tested by N gene PCR, and 2 were weakly positive: 1 S. vulgaris and 1 A. sylvaticus. In neither case, however, could a sequence be obtained from the amplicon. 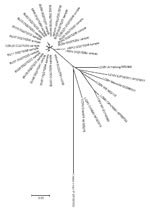 Nucleotide and amino acid GPC sequence identities for all the samples in this study ranged from 93.6%–100% (Table 2), and 94.5%–100%, respectively (data not shown). When compared with other arenaviruses, the nucleotide sequences exhibited 78.7%–85.8% identity with LCMV reference sequences and only 58.1%–59.9% identity with Lassa virus (Appendix Figure).

The nucleotide sequences of most PCR amplicons clearly identified LCMV as the most frequent cause of the antibody detected. However, the detection of arenaviral RNA in 2 animals by the N gene PCR, but not by the LCMV-specific GPC PCR, may suggest the presence of another species of arenavirus. Further studies are needed to determine if other arenaviruses species are present in European rodent populations (8).

Figure. Unrooted neighbor-joining tree using the p-distance model (1,000 replicates) for a section of the glycoprotein precursor gene gene, showing bootstrap values of >60 for all sequences identified in this study (283...

Genetic heterogeneity was present within and between sites (Figure), as seen in previous studies of arenaviruses (13,14). Sequences from animals in the captive colony and a nearby farm (MF) clustered and were different from those from a more distant farm (BHF). Furthermore, all of the British sequences clearly clustered separately from the reference strain sequences (from the United States, France, Germany, or Slovakia). These findings suggest spatial heterogeneity in sequence may be reflected in host range and pathogenicity. Sequencing might be useful in tracing sources of future human outbreaks.

This study has increased the list of European (and North American) rodents that may be infected with LCMV and that might therefore pose a risk to humans. The genetic variation observed and potential variations in pathogenicity may indicate that some wildlife populations pose more of a public health risk than others. Further studies are needed to assess which mutations cause increased pathogenicity and to establish whether or not LCMV represents the only arenavirus present in European rodent populations.

Dr Blasdell is based at the Pasteur Institute, Phnom Penh, Cambodia, where she is studying hantaviruses in Southeast Asia. Her research interests are in the ecology and evolution of natural host-virus systems.

We thank all those who contributed samples, allowed us access to their animals, and allowed us to trap on their land. Thanks also to Alan Radford for his assistance with sequence analysis.