Ducks as Sentinels for Avian Influenza in Wild Birds

To determine the effectiveness of ducks as sentinels for avian influenza virus (AIV) infection, we placed mallards in contact with wild birds at resting sites in Germany, Austria, and Switzerland. Infections of sentinel birds with different AIV subtypes confirmed the value of such surveillance for AIV monitoring.

As a consequence of infections of wild birds and poultry with highly pathogenic avian influenza virus (HPAIV) subtype H5N1, surveillance of wild birds for avian influenza viruses (AIVs) has intensified in Europe since 2005. Reporting of results is compulsory in the European Union (1,2). HPAIV surveillance includes investigation of dead or sick wild birds (3) with the aim of early detection of HPAIV (H5N1) complemented by sampling of healthy wild birds to monitor for low pathogenicity (LP) AIV strains (4). Previously, sentinel birds were used successfully to obtain information about AIV subtypes circulating in wild birds (5), but results of those studies are now outdated. Also, the effectiveness of sentinel birds has not yet been documented for AIV strains that emerged during the past decade.

We evaluated a sentinel approach to monitor the prevalence of HPAIV and LPAIV within an ecosystem, obtain information about seroconversion and duration of immunity after infection with AIV, and serve as an early warning system for the introduction of HPAIV (H5N1) and other notifiable AIVs (subtypes H5 and H7) to wild bird populations. Here we summarize results from a 2-year period of 3 international sentinel projects ongoing since 2006. 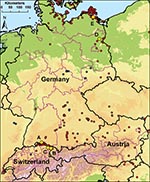 In 2006, multiple introductions and spread of HPAIV (H5N1) occurred in Europe, including the wetlands in Austria, Germany, and Switzerland (3,4,6,7). For our study, we selected 5 locations with substantial and heterogeneous wild bird populations on the basis of HPAIV (H5N1) subtype detected during 2006. Sentinel stations were located around Lake Constance and in 2 other wetlands in Germany. The sentinel flocks at Lake Constance were situated in 1) Radolfzell (Möggingen), Germany (47°45′58′′N, 8°59′45′′E); 2) Altenrhein, Switzerland (47°29′25′′N, 9°32′45′′E); and 3) Bregenz-Thal (Rheindelta), Austria (47°30′60′′N, 9°38′55′′E). The 2 other stations were situated 4) on the Isle of Koos close to the Island of Rügen in Mecklenburg–Western Pomerania, Germany (54°10′13′′N, 13°24′11′′E) and 5) near the Oder Valley at Lake Felchow (Brandenburg), Germany, (53°03′09′′N, 14°08′06′′E) (Figure 1). After their wing feathers were clipped, 10–20 hand-bred adult mallard ducks (Anas plathyrhynchos) <1 year of age were placed in pens in natural water bodies, allowing continuous direct contact with wild water birds as previously described (5). Cloacal and oropharyngeal swabs and blood were taken from the mallards and tested negatively by using 1-step TaqMan real-time reverse transcription–PCR (RT-PCR) or competitive nucleoprotein antibody ELISA (cNP ELISA) (ID-Vet, Montpellier, France; Anigen, MegaCorGmbH, Hörbanz, Austria) before their use as sentinels.

At all sentinel stations in Germany, we collected oropharyngeal and cloacal swab samples from the sentinels every 14 days starting in autumn 2006. Sampling at the station in Austria started in February 2007 and at the station in Switzerland in October 2007. Laboratory tests were conducted in accordance with the Diagnostic Manual for Avian Influenza of the European Union (8). RNA was isolated from swabs by using viral RNA kits (QIAGEN, Hilden, Germany; Macherey-Nagel, Oensingen, Switzerland) and analyzed by real-time RT-PCR for influenza virus matrix (M) or nucleocapsid protein (NP) gene fragments. In positive samples, H5-, N1- and H7-specific real-time RT-PCRs were used to identify or exclude respective subtypes (9,10). H5 and H7 isolates were pathotyped following the European Union directive (8). Direct hemagglutinin (HA) typing or sequencing of positive samples was carried out as previously described (7,11–13). The neuraminidase (NA) subtype was identified molecularly, by following the method of Fereidouni et al. (14). Simultaneously, we attempted virus isolation in embryonated chicken eggs from positive samples (8).

From October 2006 through September 2008, at least 23 specifiable AIV infections were detected at the sentinel stations by the fortnightly swabbing. After initial AIV introduction, virus was excreted during the following 1–3 sampling dates (Figure 2). All ducks at all sites tested positive at least once. Infections caused by AIV of 8 HA subtypes, including H5 and H7, and 6 NA subtypes, were found in clinically healthy sentinel birds (Tables 1, 2). Viral RNA and, in 44% of AIV cases, infectious virus also were recovered both from cloacal and oropharyngeal swabs. AIVs were subtyped as H1N1, H1Nx, H2N2, H2N5, H3N2, H3Nx, H3N8, H4N6, H5Nx, H6N5, H6N8, H7N3, H7Nx, and H9N2. Cycle threshold values ranged from 24 to 40. Pathotyping of H5 and H7 subtypes showed the exclusive presence of LP viruses. Additional AIVs were detected but could neither be isolated nor sequenced for subtype identification because of low loads of viral RNA. However, we did not detect H5, N1, and H7 subtypes by using real-time RT-PCR. Infections occurred most frequently from August through January (Figure 2; Table 1). Reinfection of the sentinels with the same subtype occurred in 2 of the sentinel flocks in Germany (Table 1).

Blood samples were collected from the ducks once a month, and serum was tested in a cNP-ELISA after heat inactivation at 56°C for 30 min. After each natural infection, sentinel animals seroconverted, and serum scored positive in the cNP-ELISA within 2–4 weeks. By hemagglutination inhibition test using homosubtypic but not autologous antigen, HA-specific antibodies were detected only rarely and at low titers.

In practice, AIV surveillance of live wild birds is difficult and involves substantial labor and costs, particularly for purchase and maintenance of trapping equipment, salary of trapping staff, and laboratory analysis. Trapping of wild birds also can be biased by season and by bird species that are easier to catch. Low proportions of AIV-positive results (<3%) indicate the low cost:benefit ratio of surveillance based on trapping wild birds (2). In contrast, our findings demonstrate that the use of sentinel birds in regions with substantial wild bird populations achieves a high rate of AIV detection and, therefore, is an efficient supplement to active AIV monitoring. The detection of different AIVs among the sentinel ducks reflects the natural ecology of AIV at discrete locations. Recently, all duck species, especially dabbling ducks, have been assessed as high-risk species for possibly contributing to the transmission of HPAIV (H5N1) (15). Therefore, mallards as sentinel species ensure a high probability of detecting AIV if kept in direct contact with wild water birds. In addition, sites for sentinel stations need to be selected carefully to achieve spatial representation.

Although our study was conducted in areas where HPAIV (H5N1) had circulated in wild birds in 2006, this subtype was not found by screening live wild birds or by using sentinel birds during the study period. Therefore, persistent circulation of HPAIV (H5N1) in the wild bird populations is unlikely for the area of Lake Constance, the coastal area of Mecklenburg–Western Pomerania, and the region of the Oder Valley in Brandenburg. However, because of the limited sample sizes, a low prevalence cannot be excluded. Although HPAIV (H5N1) was found only rarely in apparently healthy birds, e.g., in a pochard (Aythya ferina) in Switzerland in 2008 (Figure 1), regular testing of sentinel birds could increase the probability of detecting sporadic transmission of HPAIV in healthy wild water birds even in the absence of detectable deaths.

Dr Globig is a veterinarian working with the International Animal Health team of the Friedrich-Loeffler-Institute, Federal Research institute for Animal Health. Her main research interests are emerging infectious diseases and veterinary epidemiology.

We thank the Ministry of Food and Rural Areas in Baden-Württemberg; nature conservation and veterinary authorities in Baden-Württemberg, Brandenburg, and Mecklenburg–Western Pomerania; and veterinary authorities of the Canton Thurgau and St. Gallen in Switzerland for authorization of sentinel stations. We also thank the Nature Conservation Society Rheindelta, Austria. We appreciate the excellent assistance of J. Anklam and M. Calderana in sample processing and virus testing.

Ducks as Sentinels for Avian Influenza in Wild Birds