Hemorrhagic Fever with Renal Syndrome in 4 US Soldiers, South Korea, 2005

Hantaan virus (HTNV), the etiologic agent for hemorrhagic fever with renal syndrome (HFRS), accounts for ≈70% of all HFRS cases in South Korea and is the most severe of the 4 rodent-borne hantaviruses (Seoul virus, Soochong virus, and Muju virus) found there (1–3). Recently, a shrew-borne hantavirus, Imjin virus, was isolated from Ussuri white toothed shrews (Crocidura lasiura) captured near the Imjin River in South Korea (4). The reservoir host of HTNV, the striped field mouse (Apodemus agrarius), is the most abundant field rodent found in South Korea. We conducted an epidemiologic investigation for rodents at 6 training sites near the Demilitarized Zone after 4 US soldiers acquired HFRS in 2005, because no evidence of rodent activity was found where the soldiers worked or resided at their base camp (Camps Hovey and Casey).

On October 27, 2005, a US soldier (patient 1) assigned to Camp Hovey, Dongducheon, exhibited signs and symptoms of HFRS (Table 1). The patient was transferred to the Brian Allgood Army Community Hospital (BAACH), Yongsan Army Garrison, Seoul, South Korea, and on October 28, 2005, was confirmed to be seropositive for hantavirus infection by ELISA. A medical advisor initially suspected that the patient may have acquired the infection while sweeping out a dusty storage area at Camp Hovey, where he resided, ≈3 days before the onset of symptoms. A survey of the suspected storage room did not uncover any signs of rodent activity. These data along with the known incubation period of hantaviruses (4–>50 days) prompted a further search for the actual site of transmission.

Figure 1. Location of training sites where hemorrhagic fever with renal syndrome (HFRS) patients 1–4 conducted training exercises 50 days before the onset of illness. Rodent surveillance was not conducted at Watkins Range...

A blood sample from patient 1, tested by both the indirect immunofluorescent antibody (IFA) technique and reverse transcription–PCR (RT-PCR), confirmed that the patient was infected with HTNV. An epidemiologic survey was conducted, and results showed that the patient had trained at 4 US- and South Korea–operated training sites from 26 to 35 days before the onset of symptoms. The patient had first trained at local training area (LTA) 320, then at LTA 36/37, and finally at firing point (FP)-60 (Figure 1). The training consisted of setting up firing positions, establishing a cantonment site, and performing other training activities for 5 days before moving on to FP-60, where troops conducted firing exercises from September 25–29, 2005, before returning to Camp Hovey.

On November 8–9, 2005, two soldiers (patients 2 and 3) from Camp Casey, Dongducheon, had signs and symptoms of HFRS and so were sent to the BAACH where they received a diagnosis of HFRS (Table 1). Patient 4 from the same unit sought treatment at the Camp Casey Troop Medical Clinic on November 13 with low-grade fever, decreased appetite, abdominal pain, chills, low back pain, nausea, and vomiting, and was provided fluids and assigned to quarters (home bed rest). On November 14, laboratory results indicated a nonspecific proteinuria characteristic of HFRS infections, and the patient was transported to the BAACH, where HFRS was diagnosed. Blood samples from all 3 patients were positive for HTNV by IFA and RT-PCR. All 3 patients had trained at Twin Bridges Training Area (TBTA) with potential incubation periods that ranged from 16 to 35 days, and 2 (patients 2 and 4) had trained together at Rodriguez and Watkins Ranges 3 days before conducting a tactical move to TBTA (Table 1; Figure 1). Patients 2 and 4 conducted training at TBTA-North (N) and TBTA-South (S), and patient 3 only conducted training at TBTA-N. 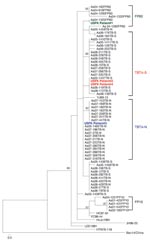 Figure 2. Phylogenetic tree by maximum parsimony method, rooted at the midpoint, based on the 320-bp region of G2 glycoprotein–encoding medium segment of 4 hemorrhagic fever with renal syndrome patients who were US...

The relationships between rodent density, the proportion of hantavirus-seropositive rodents, and incidence of human infection are complex and poorly understood (7,8). Previous literature indicates that a prevalence of hantavirus seropositivity >20% among A. agrarius mice greatly increased the risk for transmission (9–11). Although monitoring rodent populations may provide some warning, the most effective means of controlling hantavirus infections is limiting human contact with rodents and the inhalation of dust with virus-laden rodent excreta (12).

The large patches of tall dense grasses narrowly separated by barren ground where artillery firing is conducted at FP-60 provide harborage for A. agrarius mice and, during the winter trapping period, yielded ≈20% capture rates (10). Eliminating these large grassy islands, and thus the rodents that inhabit these areas, and cutting the tall grasses and scrub vegetation to <10 cm along the training site perimeter would decrease hantavirus infection risks by reducing the rodent populations. Efforts to mitigate disease risks through modernization of training sites, cutting of vegetation that increases predation of small mammals, and habitat reduction within 50 m of military operations, where possible, are being instituted at selected US-operated training sites as a result of consolidation and modernization of large, multipurpose range complexes.

Previously, phylogenetic analysis of a 324-nt region of the G2 glycoprotein-encoding M genomic segment has been shown to be representative of the entire M segment (6). This region may be useful for classifying newly identified hantaviruses (when cross-neutralization data are unavailable) or for further analysis of molecular phylogeny of hantaviruses spatially. The genome of HTNV sequences obtained from patient 1 was identical to a viral sequence from an A. agrarius field mouse captured at FP-60 and those from patients 2 and 4 were identical to 3 viral sequences from A. agrarius at TBTA-South, and patient 3 was identical to 11 viral sequences from A. agrarius field mice at TBTA-North. These data showed the epidemiologic link between US soldier patients and rodent hosts at the training sites near the Demilitarized Zone in South Korea.

Dr Jin-Won Song is a professor of microbiology at Korea University. He has had a long-term interest in the global epizootiology and epidemiology of hantaviruses.

We thank Brian Allgood (deceased), Martha Sanders, and Hee-Choon Lee for their support in pursuing the epidemiologic investigations leading to identification of sites of HFRS transmission. We thank Suk Hee Yi for analysis of data and GIS mapping. We also thank Jiun Yoon, Amy Nguyen, Min Ro, and Rex Bergren for their support.

Hemorrhagic Fever with Renal Syndrome in 4 US Soldiers, South Korea, 2005