A fatal case of enterovirus 71 infection with pulmonary edema and rhombencephalitis occurred in Brest, France, in April 2007. The virus was identified as subgenogroup C2. This highly neurotropic enterovirus merits specific surveillance outside the Asia-Pacific region.

Enterovirus 71 (EV71), like other enteroviruses (family Picornaviridae), induces mostly asymptomatic or clinically benign infections. The virus is a leading cause of foot and mouth disease and, above all, is an emerging agent of acute central nervous system disease (aseptic meningitis, flaccid paralysis, encephalitis). Since its identification in 1969, EV71 has been the subject of several studies, particularly over the past decade in the Asia-Pacific region where several outbreaks have been reported (1–5). Epidemics have also been described in the United States, Brazil, and Europe (Sweden in 1974, Bulgaria in 1975, and Hungary in 1978) (6). EV71 can be divided into 3 independent genogroups by molecular typing: A, B, and C (1). Genogroups B and C can be further subdivided into subgenogroups B1–B5 and C1–C5 (6). Subgenogroups can replace each other within a short period of time, but several genotypes can also cocirculate as seen in Malaysia (2).

Death caused by this virus occurs rarely; young children are especially at risk. This report describes a fatal case of acute pulmonary edema with rhombencephalitis that occurred within the course of an EV71 infection in France.

In April 2007, a 17-month-old boy was referred to the pediatric emergency ward of the Brest University Hospital. He had hyperthermia, which had begun 48 hours earlier. Upon arrival, he appeared to be in good general condition, despite mild respiratory discomfort and episodes of vomiting. Nasopharyngitis was diagnosed. He was discharged with treatment consisting of symptomatic medication and oral rehydration.

He was readmitted to the pediatric emergency unit 12 hours later, in severe respiratory distress. Disorders of consciousness and drowsiness were observed. He was immediately given supportive intravenous corticotherapy in association with aerosol and oxygen therapy. He was subsequently transferred to the pediatric intensive care unit. Results of his chest radiograph were normal. Laboratory test results were as follows: leukocytosis 23,300/mm3 (67.5% polynuclear neutrophils), platelets 453,000/mm3, hemoglobin 116 g/L, and hematocrit 34.9%. The C-reactive protein value was elevated (11 mg/L) and liver function was conserved. Severe dyspnea, hyperglycemia (2.02 g/L), and a decreased blood pressure (38 mm Hg) rapidly developed. After the onset of this acute respiratory distress syndrome, a second chest radiograph showed marked lung infiltration. The patient was intubated because of increased oxygen dependence. Cardiorespiratory arrest occurred during the induction of anesthesia. Despite cardiopulmonary resuscitation, he died <12 hours after his second admission to the pediatric emergency ward. 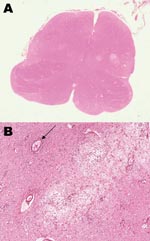 An autopsy was performed with the prior consent of the parents. Pulmonary edema and multiple foci of polymorph inflammatory infiltrate were present in lung samples. Encephalitic necrotic lesions were multifocal but predominant in the inferior brainstem and superior cervical medulla. Respiratory centers were affected, as were vegetative nucleates of the medulla oblongata (Figure 1). No inflammatory or necrotic areas were found in cardiac muscle. 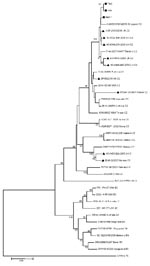 An enterovirus was isolated in the MRC-5 cell culture from a bronchial aspirate taken just before death. An enterovirus was also isolated in an autopsy nasal swab. Other autopsy samples (lung, spleen, and urine) were positive for enterovirus by reverse transcription–PCR (RT-PCR) (Enterovirus consensus kit, Argene, Verniolle, France), but no virus was isolated from these samples. Brain tissue could not be used for virologic studies because of formalin fixation. The enterovirus strain isolated in cell culture was sent to the French National Reference Centre for Enteroviruses, where it was identified as EV71 by partial viral protein (VP) 1 sequencing (7). A second analysis was performed that targeted the 891 nucleotides of the VP1 gene, as described by Bible et al. (8). This sequence was compared by phylogenetic analysis with 34 GenBank-selected VP1 enterovirus 71 strains (Table). A phylogenetic tree was constructed by neighbor-joining, using the Kimura 2-parameter distance method to define relationships between the current isolate and other EV71 subgenogroups. The VP1 sequence of the French patient who died clustered with VP1 sequences belonging to the C2 subgenogroup (Figure 2). The 2 closest-matching isolates originated from 2 young children admitted to the Brest Hospital emergency ward a few months later, in June and July 2008, respectively. The first, 13 months of age, was admitted for acute respiratory syndrome, which rapidly resolved. Enterovirus 71 was isolated from the child’s bronchial secretions. The second child, 31 months of age, had acute gingivostomatitis, fever, and cerebellar syndrome evocative of meningoencephalitis. Enterovirus was isolated from buccal lesions, but no virus was detected by RT-PCR in cerebrospinal fluid (CSF), even though pleocytosis was present. He recovered quickly. The VP1 full-length sequences of the 3 strains were deposited in GenBank under the accession nos. FJ824734–FJ824736. The high nucleotide identity among the 3 strains (>98%), and their place and period of circulation suggest a probable identical ancestral strain, which remains undefined. The origin of the EV71 strain responsible for the substantial pulmonary edema described here remains unknown. The 3 strains isolated clustered with 3 other European strains, isolated in 2006 and 2008 in the United Kingdom (8,9), and with 2 Asian strains, isolated in 2007 in Thailand and in 2008 in Singapore and Thailand (GenBank, unpub. data).

Acute pulmonary edema in EV71 infections was rarely reported before the 1998 outbreak in Taiwan (12). Since then, this disease, which is often fatal, has been more frequently described, with known prognostic factors, including clinical and biologic features such as central nervous system involvement, leukocytosis, decreased blood pressure, and hyperglycemia (13). The fatal infection reported here, which ran a biphasic course, featured all of these signs, with death occurring within a few hours of the onset of respiratory distress. This devastating syndrome is believed to result from the extensive damage of bulbar vasomotor and respiratory centers (Figure 1). In the study by Kao et al. all 21 patients who had acute pulmonary edema associated with these signs died within 4 hours of the development of acute respiratory distress syndrome (13).

No reports of fatal cases of EV71 infection in Europe have been made since cases were reported in Hungary in 1978 (9–11,14) with the exception of a fatal case of panencephalitis associated with subgenogroup C2 in the United Kingdom (8). No single neurovirulent genotype appears to be associated with severe and fatal cases; at least 3 separate genotypes have been isolated from patients with fatal cases in Malaysia (Sarawak), Japan, and Taiwan (6). A similar subgenogroup such as C1 may be associated with complicated disease in Sarawak and asymptomatic infection in Norway (2,10). A specific marker for virulence has yet to be defined.

Further studies are required to estimate the prevalence of EV71 infection, and only extensive clinical, virologic, and anatomopathologic investigation may determine the actual prevalence of EV71 in severe and sometimes fatal neurologic diseases. EV71, like poliovirus, is not always recovered from CSF during central nervous system infection (15). This fact underscores the importance of virologic investigations on peripheral samples (throat swabs, urine, stool, and vesicles).

Since 2006, centers participating in the French Enterovirus Surveillance Network have declared a significantly growing number of EV71 infections (D. Antona, pers. comm.). The international spread of EV71 outside the Asia-Pacific region needs to be vigilantly monitored, because both the possibility of an outbreak and the unpredictability of virus circulation patterns represent a public health concern.

Dr Vallet is a microbiologist involved in the study of viral genetic diversity and phylogenic analyses. She works in the virological unit of Brest University Hospital, which is a member of the French Enterovirus Surveillance Network.

We thank Michèle Odermat and Marie-Annick L’Her for their help with the clinical enterovirus strain cultures in our laboratory.