Em2007, a porcine reproductive and respiratory syndrome virus (PRRSV) variant with a unique 68 aa deletion in Nsp2, was recently isolated in China. Phylogenetic and molecular evolutionary analyses indicated that Em2007 is a natural recombinant between a vaccine strain of PRRSV and circulating virus. We also tested its pathogenicity in piglets.

Porcine reproductive and respiratory syndrome (PRRS) is now considered one of the most economically important diseases in countries with intensive swine industries. The causative agent, PRRS virus (PRRSV), is a member of the family Arteriviridae (1). The genome of PRRSV is ≈15 kb and encodes 9 open reading frames (ORFs). Two distinct genotypes of PRRSV share only ≈60% nucleotide identity and are represented by the North American prototype VR-2332 and the European prototype Lelystad virus (LV) (2). Sequence differences have also been found among isolates of the same genotype, particularly in the Nsp2 regions within ORF1a, and ORF5 (3). Mutation and genetic recombination play an important role in the evolution of PRRSV (4–6).

Since May 2006, porcine high fever syndrome, caused by highly pathogenic PRRSV and characterized by high fever and high death rates in pigs of all ages, has emerged in China and affected >20 million pigs (7–9). Genomic analysis showed that nearly all of the emerging highly pathogenic PRRSVs isolated from this outbreak share a unique discontinuous deletion of 30 aa in Nsp2 (7–10). However, a novel PRRSV variant, with a 68 aa deletion in Nsp2, emerged in central China in 2007. We report the unique genetic characteristics of this novel variant and its pathogenicity in piglets.

At the end of 2007, a smaller cDNA fragment than the expected size was observed from a fetal piglet when a diagnostic reverse transcription–PCR (RT-PCR) was performed to amplify the unique genetic marker of the highly pathogenic PRRSV, indicating that a novel PRRSV variant was found. This strain, designated Em2007, was subsequently isolated and the full-length genomic sequence was determined. The genome of Em2007 was 15,272 bp, including the poly(A) tail (GenBank accession no. EU262603), and shared 87.6% and 57.9% sequence identity with VR-2332 and LV, respectively, indicating that Em2007 belongs to the North American genotype. The Nsp2 gene of Em2007 was 2,736 bp and encoded 912 aa, with a unique continuous deletion of 68 aa at positions 499–566, relative to strain VR-2332 (Technical Appendix). This unique deletion is substantially different from previous PRRSV isolates with deletions in Nsp2 (3,7–11).

To establish the genetic relationships of Em2007, we constructed phylogenetic trees using the neighbor-joining method based on the full-length genome. Results showed that Em2007 formed a minor branch, which was located in the middle of 2 clusters represented by CH-1a (the first PRRSV isolated in China in 1996) and JXA1 (the highly pathogenic PRRSV isolated in China in 2006), respectively (data not shown).

We also compared the sequence identity of individual Em2007 ORFs with representative PRRSV isolates and found that all ORFs have highest identity (>92%) with CH-1R (an attenuated vaccine strain used in China), except for Nsp2 (80.2%). Because recombinations have been reported in PRRSV in previous studies (6), we speculated that Em2007 is a mosaic. To test our hypothesis, we used 3 approaches to detect possible recombination events within Em2007. 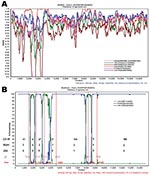 Figure 1. Recombination event analyses of the Em2007 strain of porcine reproductive and respiratory syndrome virus (PRRSV). A) Similarity plot analysis using Em2007 as query sequence. Analysis made use of a sliding window...

First, SimPlot, which calculates and plots the percent identity of a query sequence against a panel of reference sequences in sliding windows (12), was performed using Em2007 as a query. Based on a set of complete genome sequences, including 56 Chinese PRRSVs isolated during 1996-2008, three representative North American strains (VR-2332, MN184B, and P129), and 2 attenuated vaccine strains (RespPRRS, CH-1R) (the origin of all strains is listed in the Table), the SimPlot graph clearly showed that Em2007 was generally closer to CH-1R than to any other strain. However, there were 3 narrow zones showing disproportionately low levels of similarity between the 2 strains compared to other regions (Figure 1, panel A). Notably, the 3 narrow zones of Em2007 had high levels of similarity with WUH1 (a highly pathogenic PRRSV, isolated in Wuhan, China in 2006). These results indicated that Em2007 is a possible recombinant and CH-1R and WUH1 are 2 putative parental-like strains. Recombination was further analyzed by Bootscan, a program for the detection of recombination events, and the Genetic Algorithm for Recombination Detection (GARD) (13). Six potential recombination breakpoints, with maximal χ2, were found (Figure 1, panel B), indicating that 3 recombination events have taken place within Em2007. Two recombination fragments (1,457–2,312 and 3,245–4,584) are located in Nsp2; the third (8,195–9,168) is located in Nsp9.

Phylogenetic trees of nucleotide sequences of each recombination region defined by GARD, including flanking regions, were further reconstructed by the neighbor-joining method. A large discrepancy (p<0.001, by Shimodaira-Hasegawa test) between phylogenetic trees inferred for each recombination region constitutes powerful evidence for recombination (Technical Appendix). In addition, a retrospective survey found that the fetal piglet from which Em2007 was isolated was from a farm in Wuhan, China, and CH-1R was used on this farm to control PRRS, indicating the potential for recombination between CH-1R and WUH1. This evidence further supported the possibility that Em2007 is a natural recombinant between CH-1R and WUH1.

To test the virulence of Em2007, 40-day-old PRRSV-free piglets (9 piglets in each group) were inoculated intramuscularly with 105.0 mean tissue cultures infectious doses/2 mL of Em2007, CH-1a, and WUH1, respectively. Control piglets were inoculated with Dulbecco minimal essential medium. Clinical signs and rectal temperature were recorded daily. Two piglets from each group were euthanized and necropsied at 7 and 10 days postinoculation, and organs including lung, brain, spleen, kidney, liver, intestines, and lymph nodes were collected for viral load analyses and histopathologic examinations. The remaining 5 piglets in each group were observed for 21 days to evaluate death rates. 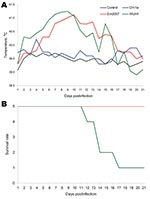 Figure 2. Pathogenicity comparison among the Em2007, CH-1a, and WUH1 strains of porcine reproductive and respiratory syndrome virus (PRRSV). Forty-day-old piglets (9 piglets in each group) free of PRRSV were inoculated intramuscularly with...

Results showed that piglets inoculated with CH-1a experienced only temporary fever and mild respiratory symptoms. Obvious clinical signs, including inappetence, lethargy, high and continuous fever, red discolorations in the body, and blue ears were observed in piglets inoculated with WUH1 (Figure 2, panel A). Furthermore, severe interstitial pneumonia (Technical Appendix) and nonsuppurative encephalitis cases were also observed 7 and 10 days postinoculation (Figure 2, panel B). Four of 5 piglets died within 21 days after inoculation. Piglets inoculated with Em2007 also showed similar clinical signs to those seen in the WUH1 group. However, the interstitial pneumonia and nonsuppurative encephalitis were mild and no deaths occurred throughout the experimental period in Em2007 group. The results of viremia and viral load also indicated that Em2007 was more mild than WUH1, but of substantially higher virulence than CH-1a (data not shown).

Em2007, a PRRSV variant with a unique continuous deletion of 68 aa in Nsp2, was isolated in China. This variant is a natural recombinant between an attenuated PRRSV vaccine strain CH-1R and a highly pathogenic PRRSV strain, WUH1. Animal experiments demonstrated that while Em2007 has higher virulence than CH-1a, the parental strain of CH-1R, it is attenuated relative to WUH1.

Previous studies have shown that genetic recombination occurs between attenuated vaccine strains of PRRSV grown together in culture (14). This study demonstrates for the first time that natural recombination can occur between vaccine and field strains, suggesting that live vaccines have the capacity to shape PRRSV evolution by homologous recombination with circulating virus.

Mr Li is a doctoral student at Huazhong Agricultural University, Wuhan, China. His research interest focuses on the evolution of PRRSV.