Plague seroprevalence was estimated in populations of pumas and bobcats in the western United States. High levels of exposure in plague-endemic regions indicate the need to consider the ecology and pathobiology of plague in nondomestic felid hosts to better understand the role of these species in disease persistence and transmission.

Zoonotic pathogens account for ≈60% of emerging diseases (1,2). Yersinia pestis, a vector-borne bacterium and the causative agent of plague in mammals, is 1 such emergent pathogen (3). Plague is maintained among rodent hosts and their fleas; however, spillover into accidental hosts can result in severe illness and death, as well as geographic spread of the disease (4).

Domestic cats are a major source of human plague infections in the United States (5), putting veterinary workers and pet owners at risk for Y. pestis infections. During 1924–2006, a total of 13 human cases of primary pneumonic plague were documented in the United States, and >5 were associated with felids (D. Wong, pers. comm.). Twelve cases of plague transmission from nondomestic carnivores to humans have been documented (5–7), including a fatal case of human pneumonic plague in 2007 that resulted from direct contact with an infected puma (Puma concolor) (8). Despite the known association of felids with human plague, the prevalence of Y. pestis infection in nondomestic cats remains relatively unknown.

Pumas and bobcats (Lynx rufus) are 2 of the most widespread felids in North American, with pumas having the greatest range of any wild terrestrial mammal in the Western Hemisphere (9). Both species inhabit large territories and travel great distances during dispersal (9,10). These highly mobile animals may periodically reintroduce Y. pestis–positive fleas to distant regions, especially during epizootics (11). Consequently, carnivore-aided flea dispersal could play an important role in the spread and persistence of plague during interepizootic periods.

We examined plague exposure in populations of bobcats and pumas in California and Colorado. This gave us an opportunity to evaluate Y. pestis seroprevalence in multiple difficult-to-sample, plague-susceptible felid species across a wide geographic area. 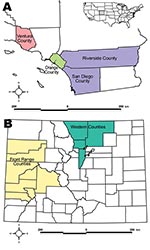 We collected samples from 119 pumas and 212 bobcats (Table 1) in 3 locations in southern California and 2 locations in western and north-central Colorado (Figure) from autumn 2002 through summer 2008. Seventy-seven of these bobcat samples consisted of thoracic fluid collected postmortem from hunter-killed animals. Eight puma samples collected in the 1980s served as historical reference for puma samples from the Colorado Western Slope (i.e., area west of the Continental Divide). Animals were captured, sampled, and released with permission of cooperating agencies after approval by animal care and use committees. Samples were processed according to protocol (12).

Data were analyzed by using a logistic link function and binary error, with antibody presence (positive vs. negative) as the outcome variable (SAS version 9.1; SAS, Cary, NC, USA). Estimates used maximum likelihood. Degrees of freedom were calculated by using a Kenward-Roger adjustment. Categorical factors included location, species, age, sex, and capture season. Animals captured in the fall (September–November) and in Ventura County were not plague positive and were omitted. All factors were treated as fixed variables, including location, because of previously reported differences in regional seroprevalence rates.

A total of 76 of 77 thoracic fluid samples had immunoglobulin present, as assessed by visual comparison of immunoblot staining, and were included in Y. pestis antibody analysis. Interactions were not significant and were omitted. Mean Y. pestis seroprevalence for pumas and bobcats across all locations was 17.7% (95% confidence interval [CI] 13.6%–21.8%). However, considerable variability existed across locations (Front Range, Colorado, mean 21.1 [95% CI 8.23–44.75]; Orange County, California, mean 1.23 [95% CI 0.13–10.01]; San Diego/Riverside counties, California, mean 6.58 [95% CI 1.52–24.33]; Ventura County, California, mean 0 [NA]; Western Slope, Colorado, mean 46.03 [95% CI 24.37–69.29]). Species and sex were not significant predictors of plague exposure; however, animal age, geographic location, and capture season were significant (Table 2). Adult animals (>2 years of age) and animals from the Colorado Western Slope were more likely to be seropositive (Table 1). Sixty-three percent (5/8) of historical puma samples from the Western Slope had detectable plague antibodies, similar to the seroprevalence rate of contemporary puma samples from this region (46.03%). Season also played a role, and spring-captured animals were more likely to be seropositive (Tables 1 and 2).

Colorado sample sites showed 51 (38%) positive of 135 animals tested. Seroprevalence rates in the Colorado sample areas were 21% (Front Range) and 46% (Western Slope) respectively, a higher proportion than expected given the severe disease seen in plague infections in some domestic cats (3). California sample sites had limited plague seroreactivity, with only 4 (2.2%) of 181 animals positive for plague exposure.

The Colorado Western Slope is near the Four Corners region (i.e., contiguous boundaries of southwestern Colorado, northwestern New Mexico, northeastern Arizona, and southeastern Utah). During 1957–2004, a total of 419 human plague cases were documented in the United States, of which 83% were from this region (14). The complex dynamics governing high plague incidence in this region are not fully understood despite extensive research but most likely involve climate, mammalian reservoirs, vector species, and habitat ecotypes (4,7,14).

Plague dynamics often are characterized by epizootics, resulting in interannual variation in infection rates among plague hosts; however, seroprevalence of 8 puma samples collected in the 1980s mirrored contemporary samples collected since 2002 and may indicate high levels of sustained plague activity in the area in this species. Seroprevalence rates were similar across multiple sample years. Vector-borne disease often is highly seasonal because of annual shifts in vector activities and abundance (4); however, seasonal patterns based on serologic data must be interpreted with caution because of long-term antibody persistence in some recaptured animals (S.N. Bevins, unpub. data).

Puma and bobcat data from this study suggest exposure followed by recovery. All animals were outwardly healthy. Deaths caused by plague have been documented in wild felids (8,9,15), and the potential for plague exposure remains a concern for field biologists, veterinarians, hunters, and skinners. Field biosafety guidelines have been developed in conjunction with Colorado State University’s Biosafety Office as a result of these findings. Recommendations include wearing disposable gloves, long pants, and long-sleeved shirts when handling anesthetized animals and using an N95-rated mask when conducting necropsies or handling deceased animals. Outside of human infections, plague could constitute a problem for felid conservation in areas of high plague activity (1,15).

Results suggest large numbers of Y. pestis–exposed pumas and bobcats. Regular serosurveys that document seroreactivity increases above an original baseline could indicate epizootic activity in felids and other plague hosts. High regional seroprevalence indicate these animals may be involved in the persistence and transmission of Y. pestis. This and the documented transmission of plague from nondomestic carnivores to humans (6–8) emphasize the need to better understand the role of wild felids in plague dynamics.

Dr Bevins is a postdoctoral researcher, with an emphasis in disease ecology, at Colorado State University.