We tested 55 deceased vespertilionid bats of 12 species from southern Germany for virus infections. A new adenovirus was isolated from tissue samples of 2 Pipistrellus pipistrellus bats, which represents the only chiropteran virus isolate found in Europe besides lyssavirus (rabies virus). Evidence was found for adenovirus transmission between bats.

Since the recent discoveries of Ebola virus, Henipavirus, and severe acute respiratory syndrome–associated coronavirus infections, interest in the role of bats as hosts for pathogens has markedly increased (1). With the exception of worldwide studies on bat lyssaviruses (2), most virologic investigations in bats have been limited to a particular zoonotic agent implicated in a geographically localized disease outbreak (3–5). In the remaining studies, various medically less important viruses have been discovered in bats in the Americas, Africa, Asia, and Australia (1,6). As a result of increasing research efforts regarding bats and infectious diseases in Europe, 2 new virus groups were recently detected, namely beta- and gammaherpesviruses in organ tissue (7) and group I coronaviruses in feces of European vespertilionid bats (8). However, because all bat species in Europe/Germany are protected by strict regulations, the acquisition of suitable samples for virus isolation is rather challenging in comparison to most other parts of the world.

For virologic examination, homogenized organ tissue was inoculated onto VeroE6/7 cells and monitored daily for cytopathic effects. Remaining tissue material was used for RNA/DNA extraction and further molecular analysis by generic PCR assays to detect members of several virus families including flaviviruses, hantaviruses, coronaviruses, orthomyxoviruses, and paramyxoviruses. The species of bat involved was determined by amplification and sequencing of the cytochrome B (cytB) gene, a standard technique for species identification (9). 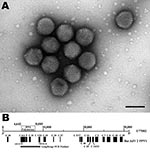 Of the tested samples from 55 bats, virus was initially detected in only 2 adult common pipistrelles (P. pipistrellus, nos. 198/07 and 199/07). A cytopathic effect was detected in Vero E6/7 cells after the second passage, indicating the presence of virus in the cell culture. Purified supernatant of these cell cultures was subjected to negative-staining electron microscopy, which showed numerous adenovirus-like particles (Figure 1, panel A). The family Adenoviridae was verified by the first reaction of a generic adenovirus-specific nested PCR (10). The obtained sequence of a fragment of the DNA polymerase gene (≈550 bp) indicated that the viruses were a novel virus type within the genus Mastadenovirus and was tentatively named bat adenovirus 2 (bat AdV-2) strain P. pipistrellus virus 1 (PPV1). 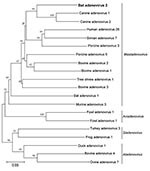 To obtain additional sequence information of bat AdV-2, a random PCR method (virus discovery based on cDNA–amplified fragment length polymorphism) (11) was applied, which showed >20 adenovirus sequences distributed over the genome (Figure 1, panel B). The partial sequence of the bat AdV-2 DNA polymerase (3,408 bp; GenBank accession no. FJ983127) was obtained after LongRange PCR by using the Expand Long Range dNTPack (Roche, Mannheim, Germany) according to the manufacturer’s directions and the following 2 primers: ABS F1-B (5′-AAAAgAggCAAAgCAAgACAgTgg-3′) and ABS R2-B (5′-ggCgggCAACAAAgACCTCA-3′). After repeated sequence analysis of the partial DNA polymerase gene for validation, we found that the identities of bat AdV-2 PPV1 to closely related adenoviruses ranged from 68% to 74% on nucleic acid level (Table 1), with the closest relationship found to canine adenoviruses 1 and 2. So far, the only other adenovirus in bats has been accidentally isolated from primary bat kidney cells of a healthy Ryukyu flying fox (Pteropus dasymallus yayeyamae) (12), which proved to have a rather distant phylogenetic relationship to bat AdV-2 (Figure 2).

After screening all 55 bats from Germany of 12 species, comprising an additional 11 common pipistrelles, an identical adenovirus was detected in 1 additional common pipistrelle. Moreover, the tissue tropism of bat AdV-2 was investigated in all 3 infected bats (Table 2). Of all tested organs, bat AdV-2 was detected in high DNA copy numbers in the intestine of all 3 bats with lesser DNA copy numbers in liver and kidneys, whereas the other organs contained little or no adenovirus DNA. Unfortunately, due to advanced tissue decomposition in most of the organs, including liver, kidneys, and intestines, thorough histopathologic examination of the 3 bats was markedly impaired.

In contrast to Maeda et al. (12), who postulated the necessity of primary bat cells to isolate DNA virus from chiroptera, our isolation of a DNA virus from an European bat in a permanent cell line (monkey kidney cells) proved the opposite. We believe that the rare detection and isolation of viruses might be attributed to the fast natural degradation of bats of the suborder Microchiroptera in comparison to that of other animal carcasses, most likely due to their extremely low weight (2–10 g). Although viruses were not detected by various generic PCR assays from homogenized frozen tissue samples, we isolated a novel virus from a hibernating insectivorous bat species. This virus was detected in high DNA copy numbers in the intestine of 3 bats that died of natural causes.

The fact that no other viral or bacterial agents were detected in these animals suggests a clinical correlation to the isolated adenovirus. Moreover, all 3 bats belonged to the same species and were of similar age. Several days before their death, they were found moribund and subsequently admitted together to the rehabilitation center, which highlights the strong likelihood of infection in the colony of origin. Cross-contamination during tissue preparation can be excluded because sterilized instruments were used for each animal, and after every incision, instruments were cleaned with 70% ethanol and a Bunsen burner flame to destroy adhering tissue remnants.

Various adenovirus types of the genus Mastdenovirus infect a range of different mammals and cause respiratory, ocular, and gastrointestinal diseases. Here, in all 3 infected bats, the highest copy number of adenovirus DNA was detected in the intestine, which suggests a correlation with a gastrointestinal disease. The host range of mastadenoviruses is known to be limited to a single (or a few closely related) mammalian species (13) with a probable co-evolution between virus and their hosts (14). The acquired partial sequence of the bat AdV-2 DNA polymerase with the closest relation to canine adenovirus (only 74% at the nucleic acid level) and the isolation from a new animal host suggests that this virus is a new adenovirus species within the genus Mastadenovirus. A comparison to the only other adenovirus found in a bat (flying fox, order Megachiroptera) with the available sequence information of a ≈550-bp fragment of the DNA polymerase gene showed their distant relationship. This strict separation reflects either the co-evolutionary development between the 2 adenoviruses (bat AdV-1 FBV1, bat AdV-2 PPV1) and their host families Pteropodidae and Vespertilionidae or a host switch of the virus originating from a yet-undetermined vertebrate host. To elucidate this problem, further research will be necessary.

In conclusion, we isolated a new virus from free-ranging vespertilionid bats, which represents the only chiropteran virus isolate besides lyssavirus (rabies) found in Europe. Moreover, the detection of this chiropteran virus can be connected with its transmission between individual bats living in close proximity to other bats.

Mr Sonntag is a master’s degree student at the Centre for Biological Safety, Robert Koch Institute, Berlin. His primary research interest is the isolation and molecular characterization of human and animal pathogens, with a special focus on emerging viral infections.

We are grateful to bat protectionists for bat collection; Jung-Won Sim-Brandenburg, Julia Tesch, and Angelina Kus for excellent technical assistance; Andreas Nitsche for design of the real-time PCR assay for bat AdV-2; and Ursula Erikli and Alan Curry for their dedicated editorial help.