We present the molecular identification of Apodemus agrarius (striped field mouse) as reservoir host of the Dobrava-Belgrade virus (DOBV) lineage DOBV-Aa in 3 federal states of Germany. Phylogenetic analyses provided evidence for multiple spillover of DOBV-Aa to A. flavicollis, a crucial prerequisite for host switch and genetic reassortment.

European hantaviruses are emerging viruses that can cause hemorrhagic fever with renal syndrome (HFRS) of differing severities. Dobrava-Belgrade virus (DOBV) is a hantavirus that appears in 3 distinct lineages hosted by different Apodemus species. The DOBV-Af lineage associated with the yellow-necked mouse (A. flavicollis) has caused serious HFRS in southeast Europe with a case-fatality rate <12% (1,2). Human infections with Caucasian wood mouse (A. ponticus)–associated DOBV-Ap have resulted in more moderate than severe HFRS in the southern part of European Russia (3). Mild-to-moderate human DOBV disease in central and eastern Europe has been connected with infection by DOBV-Aa lineage carried by the striped field mouse (A. agrarius) (3–5). Other A. agarius–associated strains, found in Estonia and called Saaremaa virus, have been proposed to form a distinct hantavirus species (6). In Germany, human DOBV cases with mild to moderate clinical outcomes have been detected by serologic investigations (4,7) but only 1 short DOBV-Aa small (S) segment sequence derived from a patient in northern Germany has been identified (8). The natural host and the geographic distribution of DOBV in its reservoir host has remained unknown in Germany. 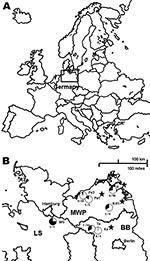 Figure 1. Seroprevalence of Dobrava-Belgrade virus (DOBV) in Apodemus agrarius mice within 3 federal states of Germany, central Europe. A) Location of the study area (box). B) Locations of the study sites. WG,...

During 2002 through 2008, a total of 366 Apodemus mice were trapped at 7 different sites in Germany (Figure 1). Serologic screening of transudates collected from these rodents by using an in-house DOBV immunoglobulin (Ig) G-ELISA, with a yeast-expressed nucleocapsid protein of DOBV-Af as antigen, identified 16 reactive and 5 equivocal samples of 114 A. agrarius trapped at 7 trapping sites in 3 federal states of Germany (Figure 1; Technical Appendix). Additionally, of 237 A. flavicollis mice, 1 equivocal sample and 4 DOBV-reactive samples were detected at 4 trapping sites (Figure 1; Technical Appendix). In contrast, of 15 wood mice (A. sylvaticus) originating from 3 trapping sites, none were found to be DOBV-seroreactive. A subsequent focus-reduction neutralization test showed a higher endpoint titer with DOBV-Aa than DOBV-Af (Technical Appendix) for 6 of the 8 investigated transudates independently, whether originating from A. agrarius or A. flavicollis.

The sequences from Germany share a common ancestor with the DOBV-Aa sequences originating from Slovakia and Russia. Together, they form a monophyletic group (DOBV-Aa lineage) that is clearly separated from A. flavicollis–borne (DOBV-Af) and A. ponticus–borne (DOBV-Ap) sequences and from A. agrarius–borne Saaremaa virus sequences. Subsequent analysis of nucleotide sequences of the entire nucleocapsid (N) protein– and glycoprotein precursor (GPC)–encoding regions confirmed these findings (Figure 2, panel B; Technical Appendix). A pairwise comparison between nucleotide and amino acid sequences of the complete N and GPC open reading frames from the novel German DOBV strains showed divergences of 1.5%–8.8% (0.3%–1.4%) and 2.1%–8.3% (0.8%–1.8%), respectively (Technical Appendix Table 2). The highest identity values on the nucleotide and amino acid sequence level (91.2%–91.7% and 99%–99.7%) were found for an S segment sequence from Denmark (Lolland/1403; GenBank accession no. AJ616854; Technical Appendix). The nucleotide and amino acid sequence divergence to other DOBV sequences was much higher, reaching 10.1%–14.3% (1%–3.3%) and 12.6%–20.7% (2.9%–9.4%), respectively.

Morphologic species determination for all DOBV-seroreactive and RT-PCR–positive rodents was confirmed by a mitochondrial cytochrome b gene-specific PCR (9,10), sequence determination, and comparison with available GenBank sequences from A. agrarius and A. flavicollis (Technical Appendix Table 1).

Based on a large panel of the entire N- and GPC-encoding DOBV sequences, we report direct molecular evidence that DOBV in Germany is represented by a genetic lineage associated with A. agrarius (DOBV-Aa). In contrast, we found no evidence for the occurrence of DOBV-Af in A. flavicollis or other Apodemus species from Germany. Consistent with the geographic distribution of A. agrarius (11) and the report of human DOBV disease exclusively in northern and northeastern Germany, this finding may confirm DOBV-Aa as the sole causative agent of DOBV infections in Germany (4; Robert Koch-Institut, SurvStat, www.rki.de).

The phylogenetic analyses demonstrated 2 well-separated clusters within the DOBV-Aa lineage. These rodent-derived DOBV sequences in Germany represent a major contribution to the DOBV genomics and phylogenetics. Future investigations should help to identify specific features of these DOBV-Aa strains resulting in its frequent spillover to A. flavicollis and to prove a putative adaptation of DOBV-Aa on A. flavicollis after spillover, as well as possible reassortment processes.

Mr Schlegel is a doctoral student at the Friedrich-Loeffler-Institut. His research interests are the ecology, molecular evolution, and pathogenesis of rodent-borne viruses.

We kindly acknowledge the support of the various partners in the network “Rodent-borne pathogens,” additional collaborators from different parts of Germany, and Dörte Kaufmann, Daniel Balkema, and Heike Lerch.

This work was supported by the Bundesministerium für Ernährung, Landwirtschaft und Verbraucherschutz, grant number 07HS027 (to R.G.U.); by the Deutsche Forschungsgemeinschaft, grant no. KR 1293/9-1 (to D.H.K.); by the Slovak Scientific Grant Agency VEGA, grant number 2/0189/09 (to B.K.), by the Förderverein of the Friedrich-Loeffler-Institut (to M.S.), and by the Paul und Ursula Klein-Stiftung (to J.S.C.).