To the Editor: Oropouche virus (OROV), a member of the Bunyaviridae family, Orthobunyavirus genus, Simbu serogroup, is transmitted to humans in urban areas by the biting midge Culicoides paraensis and causes epidemic acute febrile disease (1). Since its first isolation in Trinidad in 1955 (2), OROV has been associated with large outbreaks in South and Central America; half a million cases have been described during the past 45 years (1). The tripartite genome of OROV comprises single-strand, negative-sense large (L), medium (M), and small (S) RNAs that encode RNA polymerase, glycoproteins, and nucleocapsid, respectively. Studies have indicated the existence of 3 genotypes of OROV circulating in Brazil: genotypes I and II in the Amazon Basin and genotype III in the Southeast Region (3–5).

OROV causes explosive urban epidemics. Serologic evidence of exposure to OROV in populations not affected by known outbreaks suggests that the virus circulates endemically (1). However, no sporadic infections have been reported. Here we report a sporadic OROV infection detected by clinical and laboratory surveillance of acute febrile illnesses in Acre, a state in the western Amazon region of Brazil. From March 2004 through October 2006, we prospectively investigated 69 febrile episodes in persons 6–60 years of age (mean, 28.1 years) living in the town of Acrelândia (10°13′W, 67°00′S) and surrounding rural areas (25.7% and 74.3% of the sample, respectively).

Serum samples for reverse transcription–PCR (RT-PCR) were stored in liquid nitrogen in the field and shipped on dry ice to the laboratory in São José do Rio Preto, 3,500 km southeast of Acre. Because malaria and several arboviruses are locally endemic (6), all patients were screened for malarial parasites by thick-smear microscopy and for flaviviruses and alphaviruses by multiplex-nested RT-PCR (7). The samples negative for both malaria and other arboviruses were further tested for OROV with primers targeting the S segment of the OROV genome in a seminested RT-PCR strategy (R.V.M. Bronzoni et al., unpub. data; primers and protocol available from the authors by request). The sample also was isolated in Vero cells, and the RT-PCR described by Moreli et al. (8) was used for confirmation.

We sequenced amplicons by using the same primers used for RT-heminested amplification and by using BigDye Terminators version 3.1 (ABI, Foster City, CA, USA) in ABI377 automated sequencer. Sequences were edited by DSGene 2.0 (Accelrys, San Diego, CA, USA) and deposited in GenBank (accession no. EU561644). One (1.4%) of 69 samples tested for OROV by heminested PCR was positive. This sample (BR/2004/ACRE27) was collected from a male patient from a rural area in April 2004. Precautions were followed to avoid contamination; positive and negative controls were used in all reactions; and the procedure was reproduced several times. The patient had ill-defined, mild flu-like symptoms; low-grade fever; and nasal discharge but reported no headache or other major symptoms. He recovered without complication.

We built a phylogenetic tree on the basis of the 522 nucleotide sequences (27–200 aa) of nucleocapsid protein gene of OROV sample BR/2004/ACRE27 and other GenBank sequences from different OROV genotypes. We used sequences from Aino, Akabane, and Tinaroo viruses as the outgroup. A phylogenetic analysis was performed by the neighbor-joining method by using the Kimura 2-parameter nucleotide substitution model (9). 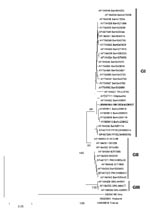 The tree showed 3 main clades, corresponding to genotypes I, II, and III, and BR/2004/ACRE27 grouped within genotype I strains (Figure). Both genotypes I and II have been described in OROV outbreaks in Acre; genotype I, however, is found mostly in Pará in the eastern part of the Brazilian Amazon region.

A baseline serologic survey in rural Acrelândia during March and April 2004 detected antibodies to OROV in 6 (1.7%) of 357 persons 5–90 years of age who were examined by microplaque hemagglutination inhibition (10). Because none of these persons had been exposed to known OROV outbreaks in Acre or elsewhere, these findings further suggest the sporadic circulation of OROV in the area.

We describe a sporadic infection of OROV infection in the Amazon region of Brazil in a mildly symptomatic patient. The nucleocapsid gene of the isolate has been sequenced, placing it in the genotype I group, the most commonly found in the Amazon Basin. These data suggest that OROV circulation may be sporadic and clinically silent and, when not associated with outbreaks, most likely neglected by local physicians.