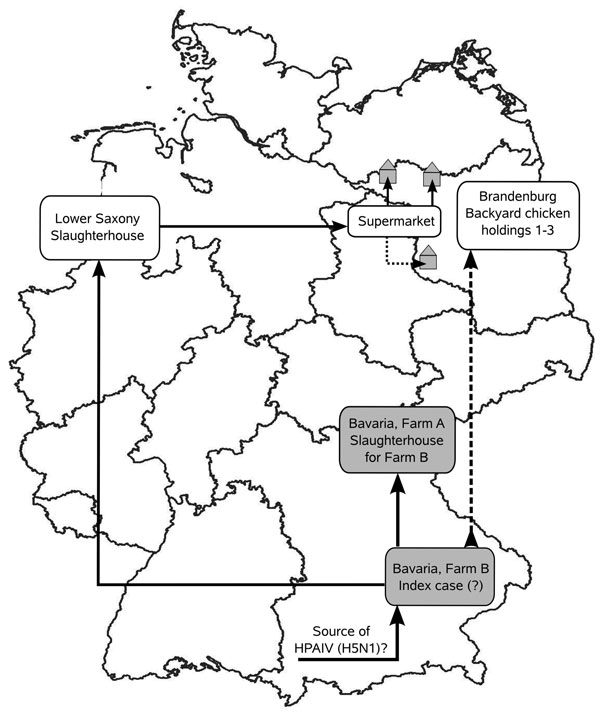 Figure 3. Possible pathway of transmission of highly pathogenic avian influenza virus (HPAIV) (H5N1) from farm B, Bavaria, to 3 backyard chicken holdings in Brandenburg (gray house symbols) based on phylogenetic and circumstantial epidemiologic evidence. Viruses of these cases were virtually identical, although they were separated by 4 months (August and December, 2007) and ≈400 km without linking outbreaks. In contrast, other viruses occurring at the same time (August) in Bavaria in wild birds or in farm A were distinguishable from those of farm B. The same was true for viruses detected in Poland (close to Brandenburg) in December. Therefore, a direct epidemiologic link between farm B and the outbreaks in Brandenburg was suspected (dashed arrow). From June 14 through June 22, 2007, three fattening flocks from farm B were slaughtered in Lower Saxony (angled arrow). These included flock B/3-5 with elevated proportion of deaths (Figure 1, panel A). Slaughtering lots 724/725, which contained ducks from farm B flocks with an elevated cumulative proportion of deaths, were distributed in Brandenburg supermarkets (horizontal arrow). Frozen duck carcasses from these lots had been purchased by the owners of the Brandenburg chicken holdings, and in 2 of the 3 outbreaks, owners admitted that chickens had access to uncooked offal from these carcasses before the outbreaks.