Seroprevalence of Antibodies to Avian Influenza Virus A (H5N1) among Residents of Villages with Human Cases, Thailand, 20051

In 2005, we assessed the seroprevalence of neutralizing antibodies to avian influenza virus A (H5N1) among 901 residents of 4 villages in Thailand where at least 1 confirmed human case of influenza (H5N1) had occurred during 2004. Although 68.1% of survey participants (median age 40 years) were exposed to backyard poultry and 25.7% were exposed to sick or dead chickens, all participants were seronegative for influenza virus (H5N1).

Three apparent waves of highly pathogenic avian influenza virus A (H5N1) infection in humans occurred in Thailand from early 2004 through 2006; these waves, which corresponded to influenza (H5N1) outbreaks in poultry, resulted in 25 confirmed human cases and 17 deaths (1–4). However, the frequency of asymptomatic and clinically mild cases of influenza (H5N1) infection was unknown in areas where these outbreaks occurred. In 2005, we conducted a cross-sectional seroprevalence study of influenza virus (H5N1) antibodies among residents of 4 rural villages in Thailand where at least 1 human influenza (H5N1) case had occurred in 2004. Backyard poultry farming is common in these villages, but the villages have no live poultry markets. 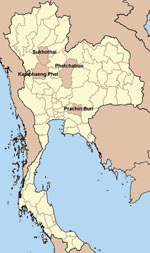 The study was conducted during October 11–27, 2005, among residents of 4 rural villages in central and northern Thailand where influenza (H5N1) outbreaks in poultry and human influenza (H5N1) cases had occurred: village A in Prachin Buri Province (1 confirmed case), village B in Kamphaeng Phet Province (1 probable case, 1 confirmed case), village C in Sukhothai Province (1 confirmed case), and village D in Phetchabun Province (1 confirmed case) (Figure). Illness onset in these case-patients occurred from August 31 through October 8, 2004. Residents of any of the villages for at least 2 weeks before and after illness onset of the respective case-patient person in each village were eligible to participate in the study. Participants were enrolled by random selection from lists of village residents or by convenience sampling. Village residents were excluded if they had influenza (H5N1) diagnosed from August 17 through October 22, 2004, were <18 years of age and did not have parental consent, had an underlying coagulopathy, or were taking anticoagulant drugs within 2 weeks of enrollment. Written informed consent was obtained from all study participants or their proxies.

Using a standard questionnaire, trained interviewers collected demographic and exposure data through brief face-to-face interviews with study participants. Exposure was defined as either direct contact (touching) or close contact (within 1 m without direct contact) with chickens or other poultry or with a person with confirmed influenza (H5N1) infection. A 5-mL blood specimen was collected from participants >5 years of age, and a 3-mL specimen was collected from those <5 years of age. Serum samples were separated at a local hospital and transported on wet ice to a laboratory within 48 h after collection. Serologic testing by microneutralization (MN) assay was performed in an enhanced biosafety level-3 containment facility in accordance with a slightly modified version of a protocol described previously (5–7). Influenza virus A/Thailand/1(KAN-1)/2004 (H5N1) was selected for the MN assay because of its antigenic similarity to influenza virus (H5N1) isolates from humans in Thailand (2). Immunofluorescence with use of 293T cells transfected with hemagglutinin H5N1 recombinant plasmid as the test antigen was used to confirm MN assay results. In accordance with our modified protocol, we considered an influenza virus (H5N1) neutralizing antibody titer >40 (equivalent to >80 in other protocols) to be a positive result (5–7).

Epi Info 2002 (Centers for Disease Control and Prevention, Atlanta, GA, USA) was used to enter and analyze study data. Mean, median, and proportion values were calculated for variables and compared by using bivariate analysis. The χ2 test was used for most analyses, analysis of variance was used to compare means from the convenience sample with those from the random sample, and the Fisher exact test was used if expected cell values were <5. Differences between the 2 sample groups were considered significant at p<0.05. The study was approved by the Ethical Review Committee for Research in Human Subjects, Thai Ministry of Public Health.

Our study had 3 notable limitations. First, because study participants, most of whom were enrolled by convenience sampling, were generally older than the populations of the villages in which they resided (Thai Ministry of Public Health, unpub. data), our findings may not be generalizable to these villages’ populations. Second, because the study was conducted in 2005, some participants may not have accurately recalled relevant exposures or symptoms from 2004 when the influenza (H5N1) cases occurred. Third, some participants with mild or asymptomatic influenza (H5N1) infection in 2004 may not have generated an antibody response strong enough or durable enough to be detected in serum samples collected in October 2005.

Further data are needed on the natural history and kinetics of the immune response to influenza (H5N1) infection over time among severely ill persons who survived, as well as among those with clinically mild illness. Such prospective serial data may help researchers interpret the significance of low levels of influenza virus (H5N1) neutralizing antibody titers, as well as the results of additional seroprevalence studies. In addition, because influenza virus (H5N1) strains continue to evolve, additional seroprevalence studies to estimate human risk for infection are needed worldwide among populations exposed to the virus, including poultry workers, rural residents, market workers, farm workers, healthcare workers, and family members of infected persons.

Dr Dejpichai is a medical epidemiologist at Maharaj Nakhon Si Thammarat Hospital, Ministry of Public Health, Thailand. She is interested in the epidemiology of emerging and reemerging infectious diseases and surveillance for natural disasters.

We are indebted to staff and colleagues with the International Field Epidemiology Training Program–Thailand and to the Bureau of Epidemiology, Department of Disease Control, Thai Ministry of Public Health. We appreciate the assistance of the district and provincial health offices of Prachin Buri, Sukhothai, Kamphaeng Phet, and Phetchabun provinces; the National Institute of Health, Department of Medical Sciences, Ministry of Public Health, Thailand; the Department of Epidemiology, University of Washington; and the US Centers for Disease Control and Prevention.

This study was supported by the Thai Ministry of Public Health.

1Preliminary findings from this study were presented on June 18, 2007, at the Options for the Control of Influenza Conference VI, Toronto, Ontario, Canada.

Seroprevalence of Antibodies to Avian Influenza Virus A (H5N1) among Residents of Villages with Human Cases, Thailand, 2005