The incidence and severity of Clostridium difficile infections (CDIs) are increasing in North America (1), probably because of emergence of an epidemic strain (NAP1/BI/027, toxinotype [TT] III) (2,3). C. difficile transmission occurs primarily in healthcare facilities, but community-associated CDI (CA-CDI) appears to be increasing and may now account for 20%–45% of positive diagnostic assay results (4,5). Up to 35% of patients with CA-CDI report no antimicrobial agent use within 3 months before disease onset (4,5), although nonantimicrobial drugs (e.g., proton pump inhibitors, nonsteroidal antiinflammatory agents) are also implicated as risk factors (4). Sources of C. difficile acquisition in community settings are unknown.

CDI is increasingly important in food animals (6). Infection rates of >95% have been documented among neonatal pigs in farrowing facilities, resulting in diarrhea and typhlocolitis (6). Toxigenic C. difficile is also implicated as a cause of diarrhea in calves (7). C. difficile was identified in raw meat intended for pet consumption (8) and in ≈20% of retail ground beef in Canada (9). We report the isolation of C. difficile from uncooked and ready-to-eat meats in retail markets in a US metropolitan area.

Packaged meats were purchased from 3 national-chain grocery stores in the Tucson, Arizona, area on 3 occasions at 1-month intervals from January to April 2007. Products sampled were both uncooked (ground beef, ground pork, ground turkey, pork sausage, and pork chorizo) and ready to eat (beef summer sausage, pork braunschweiger) (Table). Pork chorizo was produced and distributed locally; all other samples were national brands. Products with different sell-by dates (a surrogate for production date) were sampled for each meat type. Samples were not representative of all meat products in each grocery store.

For each sample, 1 g of meat was added to two 10-mL tubes of prereduced brain heart infusion (BD, Franklin Lakes, NJ, USA), which had been supplemented with 0.5% yeast extract (BD), 0.05% DL-cysteine (Sigma-Aldrich, St. Louis, MO, USA), and 0.1% taurocholate (MP Biomedicals, Solon, OH, USA). One tube was heat shocked (80°C, 10 min), and both were then incubated anaerobically at 37°C for 72 h. Aliquots were subcultured onto taurocholate cycloserine cefoxitin fructose agar (TCCFA) (10) and incubated anaerobically for 24–72 h at 37°C. Colonies were subcultured onto anaerobic blood agar, TCCFA (with or without antimicrobial agents), and confirmed as C. difficile by p-cresol odor, yellow-green fluorescence under UV illumination, a positive L-proline aminopeptidase reaction, and negative indole reaction.

MICs were determined by Etest (AB Biodisk, Solna, Sweden) on Brucella blood agar with vitamin K and hemin (Remel, Lenexa, KS, USA) that was incubated anaerobically at 35°C. Reference interpretive criteria for C. difficile susceptibility to clindamycin and moxifloxacin were used; MICs for levofloxacin and gatifloxacin were interpreted by using criteria for moxifloxacin (13). Bacteroides fragilis ATCC 25285, B. thetaiotaomicron ATCC 29741, C. difficile ATCC 700057, and Enterococcus faecalis ATCC 29212 were included as controls.

Proportions were compared by χ2 or Fisher exact test. Thirty-seven (42.0%) of 88 retail meats yielded C. difficile, including 42.4% of beef, 41.3% of pork, and 44.4% of turkey products (Table). Ready-to-eat products were more commonly culture positive (11/23; 47.8%) than were uncooked meats (26/65; 40.0%), although the difference was not significant (p = 0.34). The highest percentages of C. difficile isolates were recovered from pork braunschweiger (62.5%) and ground beef (50.0%). Culture-positive results came from both heat-shocked and non–heat-shocked cultures, whereas culture-negative specimens were negative in both types of culture, and no specimen was positive by both methods (not shown). No association was found with the meat processor, the sell-by date, the store, or the month sampled (not shown). Multiple independent cultures from 2 braunschweiger samples yielded indistinguishable isolates in the same meat sample (10/10 from 1 package and 12/12 from another; not shown), which suggests that a single strain may predominate when C. difficile is present. Our percentage of recovery of C. difficile from retail meat products is higher than that reported (20%) in a similar study of Canadian ground beef (9), possibly because of differences in culture methods, the meats sampled, or national or geographic variation. 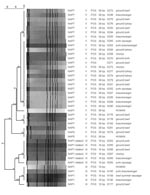 Ribotype 027 isolates are described almost exclusively in context of the current human epidemic strain, NAP1/027/TT III (2). In this study, we also found 027/TT III isolates that were only 78% similar to NAP1 (i.e., NAP1-related). Ribotype 078 strains were previously uncommon causes of healthcare-associated CDI in humans (12), but now they are emerging in pigs and calves with diarrhea ( 7; J.S. Weese, pers. comm.) and in persons with CDI (12). Two epidemiologically unrelated 078/TT V isolates from human CDI patients are indistinguishable by PFGE from pig isolates (12).

The 078/TT V isolates were uniformly susceptible to levofloxacin, moxifloxacin, and gatifloxacin. Like human TT V isolates (12), most 078/TT V meat isolates were nonsusceptible to clindamycin (56% resistant, 41% intermediate). This may not be surprising given the widespread use of tylosin, erythromycin, virginiamycin, and lincomycin in food animals and the potential for selection of macrolide-lincosamide-streptogramin resistance (14).

Fluoroquinolones are widely used in human therapy, and the current epidemic strain may have emerged because of its resistance to these agents. Fluoroquinolone use is limited in food animal production (14), with the exception of enrofloxacin for treatment of bovine respiratory disease (now approved for use in swine).

Direct or indirect human-to-human transmission is responsible for most healthcare-related CDIs (15) and most likely contributes to CA-CDI. Therefore, stopping such transmission remains the critical control point for preventing most human CDIs. Nonetheless, our findings highlight the potential both for selection of virulent or resistant strains in animals and interspecies transmission through the food supply. Our data do not prove transmission of C. difficile from foods to humans but highlight the need for studies to characterize risks posed by this organism in the human food supply.

Dr Songer is professor of Veterinary Science and Microbiology at the University of Arizona. His research interests focus on bacterial diseases of food animals, mainly those affecting the gastrointestinal tract.

The study was partially supported by grant 2003-35204-13786 from the US Department of Agriculture–Cooperative State Research, Education, and Extension Service–National Research Initiative.