Most acute cases of infection with hepatitis E virus (HEV) in Hong Kong were autochthonous, sporadic, and occurred in older adults. All except 1 isolate belonged to genotype 4; most were phylogenetically related to swine isolates. The epidemiology is similar to that in industrialized countries, where zoonosis is the major source of HEV infection in humans.

Hepatitis E virus (HEV) is a major cause of enterically transmitted acute hepatitis throughout Asia, the Middle East, and Africa. Large outbreaks resulting from fecal contamination of drinking water are confined mainly to developing countries (1), whereas sporadic cases in industrialized countries are thought to be zoonotic, with swine being the most likely reservoir (2). Studies in Hong Kong reported a seroprevalence of 16%–19% (3). No large outbreak has been recorded in Hong Kong, and the sporadic cases are believed to be imported (4). Our study examined the epidemiology and genotype distribution of HEV infections in Hong Kong in an effort to improve control of this disease.

We studied patients admitted to the Prince of Wales Hospital, Hong Kong Special Administrative Region, who had laboratory-confirmed acute hepatitis E during 2002– 2007. Acute HEV infection was diagnosed on the basis of clinical manifestations of acute hepatitis, elevation of hepatic parenchymal enzyme levels, and presence of anti-HEV immunoglobulin (Ig) M as determined by an HEV IgM kit (Biotec Laboratories Ltd., Suffolk, UK). Clinical data were retrieved from patients’ records in the computerized clinical management system of the hospital. HEV RNA was then amplified from patients’ stored serum by using a nested reverse transcription–PCR (RT-PCR) specific for open reading frame (ORF) 2 with external primers ConsORF2-s1 (5′-GACAGAATTRATTTCGTCGGCTGG-3′) and ConsORF2-a1 (5′-CTTGTTC RTGYTGGTTRTCATAATC-3′) and internal primers ConsORF2-s2 (5′-GTYGTCTCRGCCAATGGCGAGC-3′) and ConsORF2-a2 (5′-GTTCRTGYTGGTTRTCATAATCCTG-3′) (5). Positive samples were subjected to another nested RT-PCR targeting ORF1 with external primers HE5-1 (5′-TCGATGCCATGGAGGCCC-3′) and HEVORF1-1as (5′-GGCCATTGCCTCCGCAACATC-3′) and internal primers HE5-2 (5′- GCCYTKGCGAATGCTGTGG-3′) and HEVORF1-2as (5′- ACCATCAAAGCAGTAAGTCCG-3′) (6). The ORF2 (145-bp) and ORF1 (364-bp) PCR products were sequenced, and sequence fragments were aligned by CLUSTALX 2.0 (7). Phylogenetic trees were constructed by using the neighbor-joining method (8), and rooted phylogenetic trees were generated by using PAUP* version 4.0b (9). Bootstrapping values obtained from 1,000 resamplings of the data were performed to assess the robustness of trees (10). The final tree was obtained with the FigTree program, version1.1.2 (11). Nucleotide sequence similarity among isolates was analyzed by using the Bioedit software (12). The sequence data were deposited in GenBank under accession nos. FJ438395–FJ438427 and FJ438428–FJ438460, respectively.

We identified 57 patients, of whom 56 were Chinese. All patients were negative for acute hepatitis A and B markers. Nineteen were females (none pregnant) 14–82 years of age (median age 57 years, interquartile range [IQR] 43–74 years); 38 were men 26–76 years of age (median age 52 years, IQR 38–67 years). No significant difference in age was observed (p = 0.323 by Mann-Whitney U test). Eleven patients were hepatitis B carriers, 1 had cirrhosis, and 1 was a hepatitis C carrier.

Forty-eight (84%) patients had no history of travel during the prior 6 months. Nine (16%) had traveled outside Hong Kong (6 to People’s Republic of China, 1 to Macau, 1 to South Korea, 1 to the United States) 1–4 weeks before illness onset. All cases were sporadic. 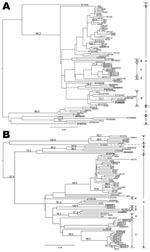 Figure. Phylogenetic tree showing the relationship of hepatitis E virus (HEV) isolates from Hong Kong. Trees were constructed by the neighbor-joining method based on the partial nucleotide sequence of the open reading...

Phylogenetic analyses of the ORF2 fragments from 46 patients and ORF1 fragments from 33 patients showed complete agreement (Figure), with most (45 [98%]) belonging to genotype 4. The remaining isolate was genotype 3 (HK14) obtained from a woman who had no history of travel. Most of the Hong Kong isolates clustered closely with a swine isolate reported from Guangxi Province, China (accession no. EU676172). Furthermore, the ORF2 phylogenetic tree showed our isolates were closely related to those reported recently from Beijing, China (accession nos. EU107400–EU107474) (13).

Our study showed that most HEV cases in Hong Kong were sporadic and autochthonous. Although a substantial proportion (21%) of patients were hepatitis B or C carriers, all diseases had a self-limiting course. This finding could be related to the circulation of relatively mild genotypes 3 and 4 in this locality. The epidemiology of HEV in Hong Kong resembled industrialized countries with a predilection for older adults, rather than older children and young adults as occurs in developing countries. Patients with HEV infections were older than those with hepatitis A, which peaked in persons 20–29 years of age, as reported by Chau et al. (14).

The distribution of HEV genotypes is related to geographic location and the mode of spread (2). Genotype 1 is epidemic in developing countries in Asia and North Africa. Genotype 2 is found in Mexico and in central African countries. Genotypes 1 and 2 occur only in humans. Genotype 3 is widely distributed and has been isolated from humans in North and South America, Europe, Japan, and the Pacific region and in domestic pigs in many countries except in Africa. Genotype 4 has been isolated from humans in China, Japan, Taiwan, and Vietnam and from domestic pigs, boar, and deer in many countries (2,5,6). Genotype 4, the predominant genotype in Hong Kong, is less virulent; it is responsible for occasional cases of clinical hepatitis in industrialized countries. A recent study from Guangzhou in southern China showed that most (39/41) HEV isolates found there were similar to Burmese-like isolates (genotype 1) (15). Although Hong Kong is near Guangzhou, none of our isolates were genotype 1. This finding could imply that the poor hygienic conditions required for sustaining the circulation of genotypes 1 and 2 do not exist in Hong Kong.

HEV infections in Hong Kong are mainly acquired locally. The sporadic nature, older age of affected patients, and predominance of genotype 4 correspond with the epidemiology in industrialized countries where zoonosis is the major source of infection. Public health control should focus on zoonotic, especially swine, foodborne transmission as a source of human HEV infection in Hong Kong.

Dr Lam is a research assistant professor of the Department of Microbiology, Faculty of Medicine at The Chinese University of Hong Kong, based at the Prince of Wales Hospital, Hong Kong Special Administrative Region, People’s Republic of China. His primary research interests include molecular virology, sequence and phylogenetic analysis of viral genomes, particularly in RNA viruses.