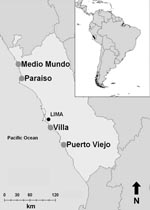 From June 2006 through December 2007, environmental fecal samples were collected from resident and migratory wild birds from 4 wetland areas along the central coast of Peru (Figure) and tested for evidence of avian influenza. Each wetland was visited 1×/week for 6 weeks; after a sampling period was completed, we would sample another wetland. Each wetland was sampled at least 2 times, with the exception of Villa, which was sampled only 1 time.

Bird colonies were identified from 7 to noon and observed for 15–20 min by persons experienced in bird identification. Size and accessibility to the bird colonies affected which species were sampled. We focused on collecting samples from single-species flocks; however, mixed flocks were also sampled and identified to the family level or as a mix of species. Immediately after the colony left the resting area, fresh fecal samples were collected. Each sample was collected with a sterile-tipped applicator, placed in a cryovial containing transport media (RPMI 1640 with 5% bovine serum albumin; Sigma-Aldrich, St. Louis, MO, USA) in a Styrofoam box with ice packs at ≈4°C, and transported to the laboratory to be processed within 24 h of collection.

We isolated no highly pathogenic AIVs; however, several low-pathogenicity avian influenza (LPAI) strains were identified. AIVs were recovered from both migratory and resident (nonmigratory) birds. Each strain was first isolated from a migratory bird and, in most instances, at least 1 week thereafter from resident species. Although this finding seems to support unidirectional transmission of the virus from migratory to resident birds, further research should be conducted to test this hypothesis. Furthermore, although subtype H13 is considered restricted to gulls (9), we isolated this subtype from a flock purely of whimbrels; this finding may have resulted from a spillover event, or perhaps gulls are not the sole reservoir species for this strain. Orders Charadriiforme and Anseriforme have a greater isolation index than other orders (9), and subtype patterns observed in this study appear to be the same as those observed in North America.

Migrating birds make frequent stopovers when moving between breeding and nonbreeding areas (10). The strains identified in our study may have been carried from Alaska and Canada through the continental United States, perhaps disseminating these viruses on their stopover sites before arriving in Peru. Thus, in the future, these strains may arise from within other countries along the north-to-south flyway.

We identified positive samples at the beginning and end of the migratory season, as has been found in previous studies (9–11). Our inability to detect viruses throughout the year, over multiple seasons, may be partially explained by insufficient sample size. The sample size was based on the assumption that the prevalence rate of circulating virus should be at least 1%; however, the rate may be lower.

The proximity of the Peru wetlands to human habitation, swine farms, and chicken farms could represent a risk for transmission of influenza viruses from wild birds to poultry, humans, and pigs. Wild birds were suspected to be the source of the avian influenza outbreak in Chile in 2002. This hypothesis was later supported by Spackman et al. (6), who identified an LPAI virus from a cinnamon teal; this virus was almost an exact match to the LPAI strain circulating among poultry during the Chile outbreak. Although the strains identified in our study were LPAI, a genetic shift, which likely occurred during the Chile outbreak, is possible.

Another study limitation is that field identification of bird species is sometimes difficult and can result in misidentification. Although most birds in a flock are generally of the same species, it is not uncommon to find additional species, albeit few, intermingled within the flock (e.g., calidrids and gulls). Therefore, bird sources of the fecal samples collected may have been misidentified. Although the probability that a sample may be recovered from 1 rogue species within a group of a different species is low, to minimize this uncertainty we assigned a few samples to the family level or as a mixture of 2–3 species. We were also unable to determine the prevalence of avian influenza in the wetlands sampled because environmental sampling limited our ability to determine whether multiple samples were from the same bird.

Our systematic evaluation of avian influenza strains among migratory and resident aquatic bird populations in South America used a cost-effective and efficient surveillance method to monitor AIV in bird populations at a specific location (12). Although all isolates were LPAI strains, our data support the hypothesis that migratory birds can serve as vectors for the spread of AIV among nonmigratory species. More data are needed to determine the role that migratory birds can play in spreading AIVs throughout the region.

Dr Ghersi is a veterinarian working on emerging infectious diseases, principally avian influenza viruses. He is currently at the University of San Marcos and the Naval Medical Research Center Detachment in Peru.

This work was supported by the US Department of Defense, Global Emerging Infections Surveillance and Response System, and the US Centers for Disease Control and Prevention.