To identify the vectors of bluetongue virus (BTV) in Germany, we monitored Culicoides spp. biting midges during April 2007–May 2008. Molecular characterization of batches of midges that tested positive for BTV suggests C. obsoletus sensu stricto as a relevant vector of bluetongue disease in central Europe.

Bluetongue disease (BT), discovered north of the Alps in Europe in August 2006 (1–5), causes massive losses of farm ruminants, particularly sheep. Epidemic BT has been caused by serotype 8 of bluetongue virus (BTV-8). The virus overwintered and spread over a large area in 2007 (5,6). Culicoides spp. biting midges can transmit BT. In the Mediterranean region, BT is mainly transmitted by C. imicola midges, a species that has so far not been detected north of the Alps (7,8). We aimed to determine the abundance of hematophagous Culicoides spp. biting midges and to identify putative vectors of BTV in Germany. 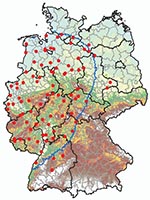 Figure 1. Culicoides spp. monitoring area, 150-km zone restricted because of the occurrence of bluetongue disease in Germany as of January 2007 (blue border), and geographic positions of 89 black light traps (red...

Biting midges were caught from April 2007 through May 2008 by using 89 black light traps (BG-Sentinel Trap; Biogents, Regensburg, Germany) distributed mostly in the German BT restriction zone of January 2007 (Figure 1). Most (n = 85) traps were placed in the vicinity of cow sheds, either adjacent to barns or in their entrance area; 4 additional traps were placed in pastures if the cattle were kept there day and night.

Biting midges were caught during 7 consecutive nights in the first week of each month. We preserved them in 70% ethanol and sorted them under the dissection microscope according to wing patterns (9,10) into batches of <50 parous, nulliparous, or blood-fed female or male insects of the C. obsoletus group (including C. dewulfi), the C. pulicaris group, or other Culicoides spp. biting midges.

Batches of female biting midges were tested for BTV by real-time reverse transcription–PCR (rRT-PCR). Each batch was homogenized in 400 μL lysis buffer (NucleoSpin 96 Virus kit; Macherey-Nagel, Düren, Germany) with a 5-mm steel bead by using a TissueLyser instrument (QIAGEN, Hilden, Germany) for 2 min at 30 Hz. After short centrifugation at 12,000 × g, nucleic acids were extracted from 200 µL homogenate (NucleoSpin 96 Virus kit) on a Tecan Freedom EVO automatic platform (Tecan Deutschland GmbH, Crailsheim, Germany). RNA was analyzed by using the iScript One-Step RT-PCR Kit for Probes (Bio-Rad, Munich, Germany) in a duplex rRT-PCR (pan-BTV-duplex rRT-PCR) combining a BTV rRT-PCR that detects all known serotypes (11) with a PCR that detects all members of the genus Culicoides (pan-Culicoides assay) as an internal control for RNA extraction and amplification. For the pan-Culicoides assay, primers and a probe were selected from aligned sequences of the rDNA internal transcribed spacer 1 and 2 (Pan-Culi-ITS1+2-597F [5′-CAG GAC ACA CGA TCA TTG ACA-3′], Pan-Culi-ITS1+2-976R [5′-CAC ATG AGY TGA GGT CGT CAT-3′], Pan-Culi-ITS1+2-623HEX [5′-HEX-AAC GCA TAT TGC ACC CCA TGC GA-BHQ1-3′]). To confirm positive pan-BTV-duplex rRT-PCR results, we extracted RNA from the remaining homogenate of the batch and subjected it to BTV-8- rRT-PCR (5). Batches were considered BTV positive if results of both assays were positive. Batches of the C. obsoletus and C. pulicaris groups with high viral loads were further analyzed for Culicoides spp. by amplification of the mitochondrial cytochrome oxidase subunit I (12).

The overall number of biting midges caught started at a moderate level (11,577) in April 2007, peaked in October (246,882), decreased to low levels during December 2007–March 2008, and started to rise again (462) in April 2008 (Figure 2). Small numbers (66–81) of Culicoides spp. midges also were detected in some traps during January–March 2008. Members of the C. obsoletus group (including C. dewulfi) were most frequently trapped, followed by the C. pulicaris group. Biting midges of the C. pulicaris group were more often collected during spring and summer 2007 in discrete locations.

A total of 540 batches of biting midges carried a low or medium (Ct values >30–40), 38 a high (Ct values 25–30), and 7 a very high (Ct values <25) BTV genome load. Batches with a high virus genome load showed Ct values similar to that of highly positive, undiluted blood samples from cattle or sheep. Although ≈70–100 µL of cattle or sheep blood are used for the BTV genome detection, <1 µL blood remains in a biting midge after a blood meal. The uptake of highly BTV-positive blood can therefore only lead to a Ct value increased at least by 6 or 7 when the biting midge is tested by rRT PCR for BTV. Our findings provide strong evidence for virus replication in the biting midges in the highly positive pools.

Our study yielded no evidence that C. imicola midges occurred in the study area in Germany. Members of the C. obsoletus group were detected in the entire monitoring area in high abundances and frequently contained BTV genome. Because of the detection of BTV in a high number of batches, which consisted of C. obsoletus sensu stricto, this species must be assumed to play a major role as a vector of BTV in Germany.

Dr Hoffmann is a veterinarian and senior scientist at the Institute of Diagnostic Virology, Friedrich-Loeffler-Institute in Greifswald-Insel Riems and head of the German National Reference Laboratory for BTV. His research interests focus on exotic animal diseases, diagnostics, pathogenesis studies, and development of new methods for molecular diagnostics.

This study was supported by the German Federal Ministry of Food, Agriculture and Consumer Protection.