To the Editor: Infection with Salmonella enterica serovar Typhi, the causative agent of typhoid fever, is an acute systemic illness with a high proportion of illness and deaths, especially in developing countries. In Europe, S. enterica ser. Typhi infections occur among travelers returning from disease-endemic areas. After emergence of multidrug-resistant S. enterica ser. Typhi strains that confer resistance to chloramphenicol, trimethoprim, and ampicillin, quinolones have become the primary drugs for treatment (1). Here we report the isolation of a CTX-M–producing S. enterica ser. Typhi in Germany.

We isolated S. enterica ser. Typhi from blood and feces specimens from a 30-year-old Iraqi woman who was admitted to the hospital in Cologne in August 2008. The patient was febrile, dizzy, and had epigastric pain and headache. The symptoms began 2 weeks earlier, after she had returned from a month-long visit to her relatives in Sulaymaniya, the capital of As Sulaymaniyah Governorate in the northeastern Iraqi Kurdistan region. The interview indicated that the same symptoms had developed in other family members in Iraq. The patient was treated successfully with meropenem (1 g 3×/day) for 2 weeks, and no relapse was observed in a follow-up period of 6 months.

The isolated strain was identified as S. enterica ser. Typhi with the VITEK2 system (VITEK2 GN-card; bioMérieux, Brussels, Belgium) and by slide agglutination with Salmonella antisera (SIFIN, Berlin, Germany) in accordance with the Kauffmann-White scheme. By using Vi-phage typing according to the International Federation for Enteric Phage Typing (L.R. Ward, pers. comm.), the strain was classified as S. enterica ser. Typhi Vi-phage type E9. Antimicrobial drug susceptibilities were determined according to the guidelines of the Clinical Laboratory Standards Institute with the VITEK2 AST-N021 card and Etest (bioMérieux). The extended-spectrum β-lactamase (ESBL) phenotype was confirmed with a combined disk diffusion test (MASTDISCS ID, Mast Diagnostica GmbH, Germany). PCR and sequence analyses were performed with universal primers for the ESBL genes blaCTX-M, blaTEM, and blaSHV as described previously (2). Primer CTX-M-F 5′-TTCGTCTCTTCCAGAATAAGG-3′ and primer CTX-M-R 5'-CAGCACTTTTGCCGTCTAAG-3′ were used for sequencing the entire blaCTX-M gene. Investigation of the CTX-M environment was performed with primers IS26-F (5′-GCCTGGTAAGCAGAGTTTTTG-3′) and IS26-CTX-R (5′-ACAGCGGCACACTTCCTAAC-3′). The presence of plasmid-mediated quinolone resistance genes (qnr) was determined by PCR and sequencing of qnrB (3), qnrS (primer F, 5′-CGGCACCACAACTTTTCAC-3′; primer R, 5′-CAACAATACCCAGTGCTTCG-3′), and qnrA (primer F, 5′-ATTTCTCACGCCAGGATTTG-3′; primer R, 5′-CGGCAAAGGTTAGGTCACAG-3′). In addition, the nucleotide sequences of the quinolone resistance-determining regions of the gyrA, gyrB, parC, and parE genes were determined as previously described (4). Transfer of β-lactam resistance was tested by broth mating assays with a sodium azide–resistant Escherichia coli J53 recipient. Selection of transconjugants was performed on Mueller-Hinton agar plates that contained sodium azide (200 μg/mL) and ampicillin (100 μg/mL). We isolated the plasmid DNA of donor and transconjugants using the QIAGEN Plasmid Mini Kit (QIAGEN, Hilden, Germany). 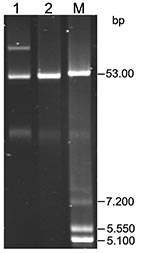 Phenotypically, the strain was resistant to ampicillin, ampicillin/sulbactam, piperacillin, cefotaxime, ceftazidime, cefepime, chloramphenicol, streptomycin, trimethoprim/sulfamethoxazole, azithromycin, and nalidixic acid. A reduced susceptibility to ciprofloxacin was detected (MICCIP = 1 μg/mL). The isolate was susceptible to imipenem, meropenem, gentamicin, tobramycin, and amikacin. PCR and sequence analyses displayed the presence of blaCTX-M-15, blaTEM-1 and the qnrB2 gene. We found an amino acid substitution in gyrA gene (83-Ser→Phe). No mutations were identified in the gyrB, parC, and parE genes. Sequencing of the insertion element (IS)26-F/R amplification product showed the location of IS26 transposase A gene (tnpA), followed by a truncated ISEcp1 mobile element upstream of the blaCTX-M-15 gene. By conjugation, 1 plasmid of ≈50 kbp was successfully transferred into an E. coli J53 recipient (Figure). PCR-based replicon typing (5) showed an IncN–related plasmid. The E. coli J53 transconjugant mediated resistance to ampicillin, cefotaxime, ceftazidime, cefepime, trimethoprim/sulfamethazole, nalidixic acid and showed reduced susceptibility to ciprofloxacin (MIC = 0.5 μg/mL). Also, in the transconjugant, the blaCTX-M-15 and qnrB2 genes were identified by PCR.

In our isolate of S. enterica ser. Typhi that contained blaCTX-15 and qnrB2, resistance to cephalosporins as well as the reduced quinolone susceptibility was easily transferable by conjugation into E. coli. This occurrence is alarming because the dissemination of such strains with acquired resistances will further limit the therapeutic options for treatment of typhoid fever.

This work was funded by the Ministry of Health, Germany.