To the Editor: Chikungunya fever was first described in Tanganyika (now Tanzania) in 1952 and is now emerging in Southeast Asia. Chikungunya virus (CHIKV) infection, a self-limiting febrile illness, shares similarities with dengue fever such as headache and myalgia. Additionally, patients with CHIKV infection typically have arthralgia, arthritis, and tenosynovitis (1). Although usually benign, CHIKV infection may on rare occasions lead to neurologic and hepatic manifestations with high illness and mortality rates (2). We report 2 immunocompromised patients with CHIKV infection associated with peritonitis, encephalitis, and secondary bacterial infections.

Patient A, a 66-year-old Singaporean-Chinese man, had a history of chronic renal disease secondary to obstructive uropathy. His baseline creatinine level was 300–400 μmol/L. For 3 years, he had ingested traditional Chinese medicine, which we suspect was contaminated by steroids because he appeared cushingoid. An outbreak of CHIKV infection was reported at his workplace. He was admitted to National University Hospital, Singapore, in July 2008 with abdominal pain, vomiting, and fever of 1 day. He had no joint symptoms. Clinically, he had systemic inflammatory response syndrome complicated by acute-on-chronic renal failure. His creatinine level was elevated at 921 μmol/L on admission. A complete blood count showed leukocytosis (19.24 × 109 cells/L) with neutrophilia and thrombocytopenia (62 × 109 cells/L). Initial blood and urine cultures and serologic results were negative for dengue virus, but serum reverse transcription–PCR (RT-PCR) and indirect immunofluorescent assay for immunoglobulin G (IgG) (Euroimmun Medizinische Labordiagnostika, Lubeck, Germany) and IgM (CTK Biotech, Inc, San Diego, CA, USA) were positive for CHIKV (3,4). Computed tomographic scans of the abdomen showed dilated small bowel loops.

Patient B, a 45-year-old Malaysian–Chinese man with diabetes mellitus, had undergone a cadaveric liver transplant in 2001 for hepatitis B liver cirrhosis. He was receiving immunosuppressants (azathioprine and prednisolone). He was admitted in August 2008 after experiencing fever, headache, and abdominal bloating for 3 days. He had no neurologic symptoms. Acute self-limiting febrile illnesses with arthritis had occurred in his hometown; CHIKV infections were suspected.

Results of his examination on admission were normal, except for bilateral enlarged cervical lymph nodes. Chest radiograph results were unremarkable. He had mild transaminitis (alanine aminotransferase 173 U/L, aspartate aminotransferase 170 U/L), elevated C-reactive protein (107 mg/L), and thrombocytopenia (120 × 109 cells/L) without leukocytosis. Results of comprehensive serum and urine microbial studies were negative for posttransplant infections. Results of serum RT-PCR were negative for CHIKV, but IgG and IgM tests were positive for CHIKV. 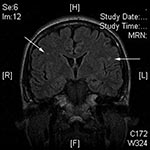 Figure. Magnetic resonance imaging of the brain of patient B, showing several nonspecific areas of enhancement (arrows), which suggests encephalitis, given the clinical scenario.

Brain magnetic resonance imaging was performed because of the patient’s persistent severe headache and transient drowsiness. It showed several nonspecific areas of enhancement, which suggested encephalitis, given the clinical scenario (Figure). However, a lumbar puncture was not performed, and hence, whether the patient’s cerebrospinal fluid contained CHIKV could not be determined. Bilateral frontoparietal white matter lesions with restricted diffusion has been suggested as an early sign of viral encephalitis (5). However, a retrospective series demonstrated that, in CHIKV encephalitis, abnormalities on magnetic resonance imaging were uncommon, and no pathognomonic features were found (6).

In this case, CHIKV was detected in peritoneal fluid, but because of the positive bacterial cultures, we are not confident about its causative role in patient A’s peritonitis. Although a series reported that 6 patients with CHIKV infection had perforated jejunal diverticula while receiving long-term nonsteroidal antiinflammatory drugs and steroids (7), the perforations were likely secondary to prolonged steroid use rather than CHIKV infection. In addition, both immunocompromised patients in our study had their CHIKV infections secondarily complicated by nosocomial infections. We note that other viral infections have been associated with bacterial translocation and secondary nosocomial infections (8). Whether these infections were linked to CHIKV infection or to the underlying chronic immunosuppressed state is unclear.