We isolated arenavirus RNA from white-toothed woodrats (Neotoma leucodon) captured in a region of Mexico in which woodrats are food for humans. Analyses of nucleotide and amino acid sequence data indicated that the woodrats were infected with a novel Tacaribe serocomplex virus, proposed name Real de Catorce virus.

A recent study found antibody to a Tacaribe serocomplex virus in white-toothed woodrats (N. leucodon) captured in Mexico (M.L. Milazzo, unpub. data). We report the determination of the nucleotide sequence of a 3352-nt fragment of the small (S) genomic segment of arenavirus AV H0030026 from RNA isolated from a white-toothed woodrat captured in 2005 in northeastern Mexico. 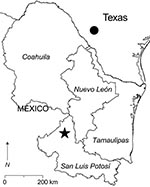 Rodents were captured in a rural area 22.8 km north of the town of Real de Catorce in the municipality of Catorce, San Luis Potosí, Mexico (Figure 1). A total of 400 live-capture traps were set each night on 2 consecutive nights in the first week of August 2005. Each rodent caught was assigned a unique identification number. Samples of whole blood, samples of kidney and other solid tissues, and the skins and skeletons of the rodents were deposited into the Museum of Texas Tech University.

The blood samples were tested by ELISA (10) for antibody (immunoglobulin [Ig] G) to Whitewater Arroyo virus strain AV 9310135 (7). Samples of spleen and kidney from white-toothed woodrats TK133448 and TK133451, 7 other white-toothed woodrats, 2 antibody-positive Nelson’s pocket mice (Chaetodipus nelsoni), and an antibody-positive Merriam’s kangaroo rat (Dipodomys merriami) were tested for arenavirus by cultivation in monolayers of Vero E6 cells (11). Samples of kidney from the antibody-positive rodents were tested for arenavirus RNA by using heminested PCR assays. The first-strand cDNA for the PCR was synthesized by using SuperScript II Reverse Transcriptase (Invitrogen Life Technologies, Inc., Carlsbad, CA, USA) in conjunction with oligont 19C-cons (2). The nucleotide sequence alignments were analyzed by using MRBAYES 3.1.2 (12) in the computer software package PAUP*, version 4.0b10 (http://paup.csit.fsu.edu). (Details of the assays for IgG, arenavirus, and arenavirus RNA and the analyses of the amino acid sequence data and nucleotide sequence data are available from C.F.F.)

Nine white-toothed woodrats, 3 northern grasshopper mice (Onychomys leucogaster), 19 deer mice (Peromyscus spp.), 11 harvest mice (Reithrodontomys spp.), 13 Nelson’s pocket mice, 45 Merriam’s kangaroo rats, and 16 other kangaroo rats (Dipodomys spp.) were captured during 800 trap-nights; overall trap success rate was 116/800 (14.5%). IgG against Whitewater Arroyo virus was found in 2 (22.2%) of the white-toothed woodrats, 2 (15.4%) of the Nelson’s pocket mice, 1 (2.2%) of the Merriam’s kangaroo rats, and none of the 49 other rodents. Arenavirus was isolated from none of the 12 animals included in the virus assays.

Figure 2. Phylogenetic relationships among 11 North American arenaviruses based on Bayesian analyses of A) glycoprotein precursor gene sequences and B) nucleocapsid protein gene sequences. The number(s) at the nodes are clade probability...

The sequence of the 3,352-nt fragment of the S genomic segment of arenavirus AV H0030026 (GenBank accession no. GQ903697) was determined from RNA isolated from white-toothed woodrat TK133448. The 3,352-nt fragment included the complete glycoprotein precursor (GPC) gene and complete nucleocapsid (N) protein gene of AV H0030026. Nonidentities between the amino acid sequences of the GPC and N protein of AV H0030026 and the amino acid sequences of the GPC and N proteins of the 10 other North American viruses included in the analyses of amino acid sequence data ranged from 28.3% to 35.2% and from 11.6% to 21.0%, respectively (Table 2). The results of the Bayesian analyses of complete GPC gene sequences (Figure 2, panel A) and complete N protein gene sequences (Figure 2, panel B) indicated that AV H0030026 represents a unique phylogenetic lineage but failed to resolve the relationship of AV H0030026 to the other North American viruses analyzed.

The nucleotide sequence of a 687-nt fragment of the S genomic segment of arenavirus AV H0030028 was determined from RNA isolated from a kidney of white-toothed woodrat TK133451. The sequence of this fragment (GenBank accession no. GU137350) was 99.9% identical to the sequence of the homologous region of the N protein gene AV H0030026. Results of assays for arenavirus RNA in the kidneys of the antibody-positive Nelson’s pocket mice and the antibody-positive kangaroo rat were negative.

Nelson’s pocket mouse (C. nelsoni) and Merriam’s kangaroo rat (D. merriami) are members of the rodent family Heteromyidae. No accounts of arenavirus infections in these or other heteromyid rodents have been published. The anti-arenavirus antibody in the pocket mice and kangaroo rat in this study may be a consequence of infection with an arenavirus other than Real de Catorce virus. Alternatively, the results of the ELISA on these rodents are inaccurate (i.e., falsely positive).

Five Tacaribe serocomplex viruses are known to naturally cause severe febrile disease in humans: GTOV, Junín, Machupo, Sabiá, and Chapare viruses. The diseases caused by these viruses range from sporadic cases to small outbreaks to hyperendemic episodes. Humans usually become infected with arenaviruses by inhalation of virus in aerosolized droplets of secretions or excretions from infected rodents. Other means of infection may include ingestion of infected rodents (13).

Human consumption of woodrats is common in rural regions in the highlands of Mexico. For example, white-throated woodrats are consumed by humans in the Potosí-Zacatecan Mexican Plateau (14), and Mexican woodrats (N. mexicana), Mexican deer mice (Peromyscus mexicanus), and other cricetid rodents are consumed by the Tzeltzal Indians in Chiapas (15). Future studies on arenaviruses native to North America should include assessments of whether humans who consume woodrats or live or work in close association with woodrats are infected by the Tacaribe serocomplex viruses associated with these rodents.

Ms Inizan is a master’s degree student in physiopathology at the École Normale Supérieure de Cachan, Cachan, France. Her research interests include early events in the immune response in infectious diseases of humans and other vertebrate animals.