Real-time PCR of Amblyomma imitator tick egg masses obtained in Nuevo Leon State, Mexico, identified a Rickettsia species. Sequence analyses of 17-kD common antigen and outer membrane protein A and B gene fragments showed to it to be R. rickettsii, which suggested a potential new vector for this bacterium.

Rickettsia rickettsii is a gram-negative, obligate, intracellular bacterium and the cause of Rocky Mountain spotted fever (RMSF). In Mexico, its transmission has been attributed to Rhipicephalus sanguineus and Amblyomma cajennense ticks.

Amblyomma imitator has close affinity with A. cajennense and was formerly confused with this species. These ticks’ distributional range extends from southern Texas, southward through Mexico (where they are widely sympatric with A. cajennense ticks) into Central America (1). In this study, we isolated and characterized R. rickettsii from A. imitator from Mexico by using molecular methods.

Males, females, and nymphs of 5 tick species (A. imitator, Rhipicephalus microplus, Dermacentor variabilis, Rh. sanguineus, and Ixodes species) were collected in Nuevo Leon State, Mexico (24°50′N, 100°4′W) in 2007 (females, males, and nymphs) by using dry ice traps (1). Ticks were identified by using morphologic keys as defined by Kohls (2) and Keirans and Durden (3) and maintained in the laboratory at the University of Texas Medical Branch (Galveston, TX, USA) according to methods described by Brossard and Wikel (4). The colonies were maintained at 22°C, under a 14-hour light/10-hour dark photoperiod. Ticks were held in 16-mL glass vials (Wheaton Glass, Millville, NJ, USA) with a mesh top over a supersaturated solution of potassium nitrate. Larvae and nymphs obtained blood meals from mice, and adults were fed on pathogen-free rabbits. Only the A. imitator colony was successfully established.

Real-time PCR analysis of eggs laid by 1 full generation of laboratory-reared females identified rickettsial DNA in 2 egg masses. DNA from 5 egg masses laid by different females was extracted by using a DNeasy Kit (QIAGEN, Valencia, CA, USA). Real-time PCR was performed by using Rickettsia spp.–specific primers CS5A and CS6 (5) for amplification of a 150-bp fragment of the citrate synthase gene in an iCycler thermocycler (Bio-Rad, Hercules, CA, USA) as described (5). R. australis DNA and water served as the positive and negative controls, respectively, and serial dilutions of a plasmid that contained the R. prowazekii citrate synthase gene were used as standards.

We selected egg masses for isolation of the rickettsial agent in Vero cells by using shell vials as described (6). The shell vials were incubated at 34°C and monitored daily by Diff-Quik staining (Dade International Inc., Miami, FL, USA) for rickettsiae. Slides that contained >4 rickettsiae were considered positive. The monolayer from the corresponding shell vial was removed manually, placed in a T-25 flask containing Vero cells (in Dulbecco minimal essential medium containing 3% heat-inactivated bovine calf serum). Samples were then placed in 150-cm2 flasks containing Vero cells for propagation of the agent.

Fragments were cloned into pCR4-TOPO (Invitrogen, Carlsbad, CA, USA), and plasmids from selected clones were sequenced >3× by using universal primers M13F and M13R. Nucleotide sequences were edited with SeqMan (www.dnastar.com/t-sub-products-lasergene-seqmanpro.aspx) and used for BLAST analysis (11). Amplification of the ompB fragment was achieved for only 1 of the samples. This finding was probably the result of a mutation at the site of primer annealing because amplification of another region of the gene was possible.

Analysis of sequences obtained from the htrA gene fragments (434 bp) amplified from both samples showed 99% identity with spotted fever group Rickettsia sequences, including the R. rickettsii sequence from a fatal case of RMSF in southwestern Mexico, Yucatan State (GenBank accession no. DQ176856.1) (12), with only a 1-nt difference. Analysis of the partial sequence of ompB (856 bp) and ompA (533 bp) genes showed 100% identity with R. rickettsii Sheila Smith strain (CP000848.1). Sequences obtained in this study were submitted to GenBank under accession nos. GU723476 and GU723477 for htrA fragments, GU723478 and GU723479 for ompA fragments, and GU723475 for the ompB fragment.

For detection of rickettsiae in A. imitator ticks, salivary glands, midguts, and ovaries were dissected from unfed adult ticks and fixed in modified Ito fixative (13), postfixed in 1% osmium tetroxide for 1 h, stained en bloc with 2% aqueous uranyl acetate for 20 min at 60°C, dehydrated in ethanol, and embedded in epoxy resin (Poly/Bed 812). Ultrathin sections were cut with an Ultracut S Ultramicrotome (Reichert, Vienna, Austria), placed on copper grids, and stained with lead citrate. Ticks were tested for Rickettsia spp. by nested PCR with primers 17K3/17K5 and 17KD1/17KD2, and sections of organs from PCR-positive samples were examined in a Philips CM-100 electron microscope (FEI, Hillsboro, OR, USA) at 60 kV. 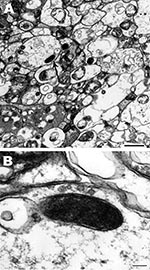 Figure. Rickettsia rickettsii (arrow) in a midgut cell of an Amblyomma imitator tick (A). The trilaminar cell wall is separated from the cell membrane by the periplasmic space (B). Scale bars =...

Single rickettsial cells were found in highly vacuolated cytoplasm of midgut epithelial cells of 1 male tick (no. 5) (Figure, panel A). Cells had typical ultrastructure for gram-negative bacteria and were surrounded by 2 trilaminar membranes (Figure, panel B): an inner cytoplasmic membrane and an outer cell wall membrane. Their size was 0.6 × 0.2 μm. Rickettsial organisms were not visualized in either salivary gland or ovaries probably because of a low number of rickettsiae, as suggested by the fact that detection of rickettsial DNA by PCR required a nested PCR.

This study demonstrated that R. rickettsii was present in egg masses of A. imitator ticks. Because eggs were laid by field-collected, unfed, adult ticks that were fed in the laboratory on pathogen-free rabbits for 1 full generation, R. rickettsii in eggs documents their transovarial transmission by naturally infected ticks and suggests a role for this tick species in the maintenance of R. rickettsii in nature.