To the Editor: The Chinese giant salamander (Andreas davidianus) is one of the world’s largest amphibian species and is often referred to as a living fossil. They primarily inhabit drainage basins of the Yangtze River, the Yellow River, and the Pearl River in the People’s Republic of China (1). Because of habitat loss, pollution, and overharvesting, the population of wild Chinese giant salamanders has dropped sharply (2,3). As a result, the Chinese giant salamander is artificially farmed in mesocosms for research and conservation. The mesocosms (ambient temperature <20°C) are maintained primarily in mountainous caves and mountainous ditches. During June–October 2010, a high mortality rate was reported in salamanders in ditch mesocosms in Shaanxi, Sichuan, and Henan, reaching an epidemic peak in July. Mortality rate reached 95% in the affected areas. Although bacteria, including Aeromonas hydrophila (4), were isolated from sick salamanders, antimicrobial drug treatment did not successfully improve the situation. Further pathologic analysis and viral testing were subsequently performed. 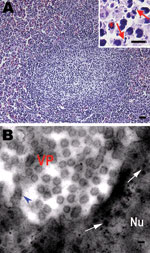 The iridoviruses are carried in the bodies of vertebrates such as gopher tortoises (Gopherus polyphemus) (5), Chinese forest frogs (Rana dybowskii) (6), and fish (7,8). Iridoviruses are thought to be transmitted horizontally in lower vertebrates such as bullfrogs (7,9,10). In addition, some iridovirus infections may be chronic or conditional (7). In this study, the virus was isolated from the liver and spleen of 30 sick (n = 7) or dead (n = 23) salamanders that were farmed in ditch mesocosms, where ambient temperatures were unusually high (>25°C) at the time of the epidemic. Although the virus also was isolated from animals living in cooler cave mesocosms (ambient temperature <18°C), these animals showed no apparent signs of illness. Studies have reported that, when infection is detected early in the course of the disease and when exogenous stress is minimized, mildly affected bullfrogs are able to clear the virus (9,10). The high water temperatures in the ditch mesocosms (i.e., >25°C) and the associated stress on the animals may have increased disease in ditch-dwelling Chinese giant salamanders. This seems particularly likely, given the absence of clinical signs of disease in infected salamanders that lived in the cooler cave mesocosms (i.e., <18°C). In addition, absence of exposure of Chinese giant salamanders to other animal carriers of the virus may prevent horizontal transmission of iridovirus.

We are indebted to Regina Turner for a critical reading and editing of the manuscript. We also thank Zhang Chi for collecting the samples and Guoyun Zhang and Hongchao Zhou for conducting histopathologic analysis.