In March and early April 2009, a new strain of influenza A virus that contained genes from the Eurasian–North American triple reassortant and classical swine lineage viruses emerged in North America (1,2). By May 21, 2010, a total of 214 countries and overseas territories or communities had reported laboratory-confirmed pandemic (H1N1) 2009, which resulted in at least 18,097 deaths in patients with PCR-confirmed illness (3). In Mexico 72,533 cases (1,228 deaths) were PCR confirmed by the second week of May 2010 (4).

We aimed to determine the drug susceptibility of pandemic (H1N1) 2009 in Mexico. We randomly selected 692 independent clinical samples (452 cell culture supernatants and 199 nasopharyngeal swab specimens [NPS]) or viral isolates, mostly from patients hospitalized in Mexico and from a few symptomatic patients with highly suspected oseltamivir- resistant infections (31 NPS and 10 lung biopsy specimens from patients who died). The study was conducted during July 2009–May 2010. All samples were received during May 2009–April 2010 at the Institute of Epidemiologic Diagnosis and Reference (InDRE [Mexico City, Mexico]); all were positive for pandemic (H1N1) 2009 by real-time reverse transcription–PCR (RT-PCR), according to the procedure recommended by the Centers for Disease Control and Prevention (Atlanta, GA, USA) and the World Health Organization.

All the sequences obtained indicated that the H→Y mutation at the NA 275 residue was absent, except in 1 NPS from an 8-month-old girl (A/Mexico/InDRE797/2010). This patient received oseltamivir treatment from the evening of January 22 through January 27. She had no known history of travel, contact with a person treated with this drug, or diagnosed immunodeficiency. Her clinical record mentioned 2 respiratory events in the 2 months before the influenza diagnosis: broncholitis, which required hospitalization, and readmission to the hospital 2 weeks after discharge because of influenza-like illness and severe pneumonia. In addition to oseltamivir, the child required other antimicrobial drugs (ceftriaxone and vancomycin) and mechanical ventilation. She slowly recovered. 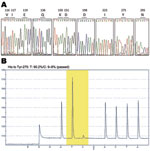 The clinical specimen was collected, and pandemic (H1N1) 2009 was laboratory confirmed on January 27, 2010. In this sample and in isolating the virus we further analyzed, we discarded any of the 9 previously described mutations (5,10) associated with resistance to NAIs (V116, I117, E119, Q136, K150, D151, D198, I223, and N295 [N2 numbering]) by the full sequence of the NA gene by using 2 overlapping RT-PCR products (Figure 1, Table 2). The complete NA sequence of the A/Mexico/InDRE797/2009 virus obtained from NPS and MDCK isolate (GenBank accession no. CY057074) confirmed the H275Y substitution and showed no other NA mutations known to be associated with NAI resistance (Figure 2, panel A). Pyrosequencing analysis performed on the clinical specimen from the 8-month-old patient showed oseltamivir-resistant H275Y and wild-type H275 virus variants (Figure 2, panel B). The A/Mexico/InDRE797/2009 virus was tested at the Centers for Disease Control and Prevention by using an NA inhibition assay (NA-Star kit, Applied BioSystems) and showed an ≈120-fold increase in oseltamivir 50% inhibitory concentration over that of a sensitive control (27.3 nmol/L vs. 0.23 nmol/L; this result was consistent with H275Y and H275 variants. No change in zanamivir susceptibility was detected (0.32 nmol/L vs. 0.30 nmol/L), which was in accord with the NA sequencing analysis. We also sequenced the M2 gene and confirmed the S31N substitution that confers M2 blocker resistance. Sequencing of the HA gene showed that the substitution D222G, potentially associated with severe clinical outcome (12), was not present in this isolate (data not shown).

In addition, 24 virus isolates collected during December 2009–January 2010 were tested in the NA inhibition assay. All were sensitive to both NAIs, with 50% inhibitory concentrations of 0.12–0.29 nmol/L and 0.17–0.36 nmol/L for oseltamivir and zanamivir, respectively.

No other molecular markers of NAI resistance, such as at residues Q136, K150, or D151, which might confer zanamivir resistance, were observed in the isolate from the 8-month-old girl. The functional NI assay confirmed the oseltamivir resistance and susceptibility to zanamivir of the virus. Both variants (H275Y and wild type) were present in the clinical specimen and its matching virus isolate, which is not unusual (13). The proportion of resistant virus (1 [0.14%] of 692 analyzed cases) is lower than has been described, perhaps because of the limited analysis. Analysis of additional samples will enable detection of additional cases. The M2 S31N substitution, the adamantane resistance marker, also was present, as is expected in this virus.

Dr Ramirez-Gonzalez is a researcher at the Institute of Epidemiologic Diagnosis and Reference. His primary research interests are the molecular epidemiology of viral pathogens.

We thank Araceli Rodríguez, Susana Serrano, Juan Carlos Del Mazo, Lidia García, Luisa Javier, Brisia Rodriguez, and Jesús Zavala for technical assistance and the InDRE influenza staff for the samples and RT–quantitative PCR diagnosis. We also thank the National Network of Public Health Laboratories and other laboratories as part of the National Influenza Diagnosis Network for their participation of initial primary diagnosis of influenza and delivery of samples to InDRE.

This study was supported by the Institute of Epidemiologic Diagnosis and Reference of the Ministry of Health, Mexico.